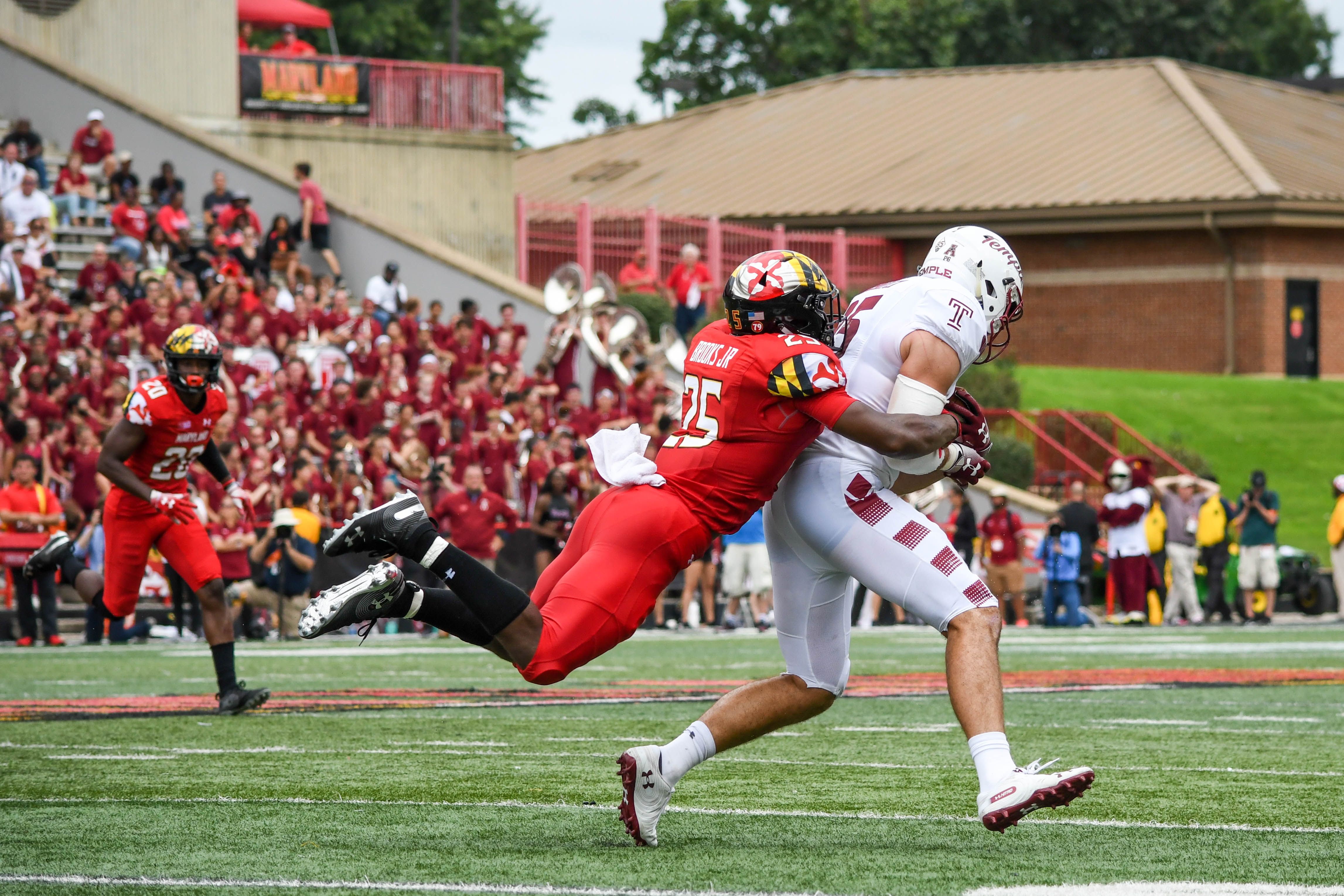 Defensive back Antoine Brooks lunges forward for a tackle during Maryland’s 35-14 loss to Temple at Maryland Stadium on Sept. 15, 2018. (Alex Chen/The Diamondback)

Maryland football is ranked for the first time since entering the Big Ten in 2014. Their next test comes on the road Saturday in Philadelphia against a Temple team that handled the Terps in College Park last year. However, both teams have changed drastically since the last meeting.

We talked with Dante Collinelli from the Temple News, to discuss the upcoming matchup between the two undefeated teams. Our conversation has been lightly edited for clarity.

With a new head coach at the helm, has the identity of the Temple football program shifted?

New head coach Rod Carey loves some speed on the offense. The Owls ran a no-huddle offense under former coach Geoff Collins, but they never moved as fast as they did this year against Bucknell. Temple will try to tire out the Terrapin defenders with their up-tempo style and then attempt to hit some big plays.

On defense, the Owls are still aggressive in every sense of the word. However, multiple players have told me the team would run more zone coverage this season as opposed to man coverage. Temple is known for their aggressive man to man style in the secondary, so it’ll be interesting to see how the players adapt against Maryland.

Despite being projected as a double-digit road underdog in the meeting last year, Temple handled the Terps seemingly effortlessly. What is the key to a repeat showing at home this year?

Obviously, the Owls will have to hold the Terrapins to under 60 points if they want to stand a chance. It was played as a joke at media availability this week, but Syracuse’s defense has some future pros and they couldn’t do it. Whoever can stop the running game will have a huge advantage. Temple defenders and coaches talked all week about how Maryland’s running game sets up their passing game. If Temple can stop Anthony McFarland it will put a lot more pressure on Josh Jackson and keep them from giving up 60.

Has the offense taken strides forward since Anthony Russo became the starting quarterback?

Maryland fans should remember Russo well since he made his first career start against the Terrapins last season. Russo’s arm strength and athletic ability was an immediate upgrade over former starter Frankie Nutile last season. Russo led the Owls to a 7-3 record as the starter last season, including a 7-1 record in the American Conference. In week one against Bucknell, Russo helped the Owls break their all-time record for yardage in a game with 695. To say the Owls offense has taken strides since Russo has taken over would be a massive understatement.

Maryland’s offense has been explosive through two games, scoring 79 and 63 points respectively. What are the keys to stopping the scoring for the Temple D?

I mentioned this earlier, but the Owls need to stop Anthony McFarland and the Terrapins run game if they want a chance. The linebackers need to stay disciplined in their gaps and not fall for any trickery in the backfield. I thought the Owls’ pass rush was a little underwhelming against a weaker opponent like Bucknell, so getting more pressure this week will be key. Josh Jackson is clearly successful with a clean pocket so making him uncomfortable will be important.

Temple wins if they can play disciplined defense and be turnover free on offense.

Maryland wins if they can establish the run early and are able to keep the Owls offense off the field.