The time for subtlety is over. UMD’s Cool Food Pledge should demand more. 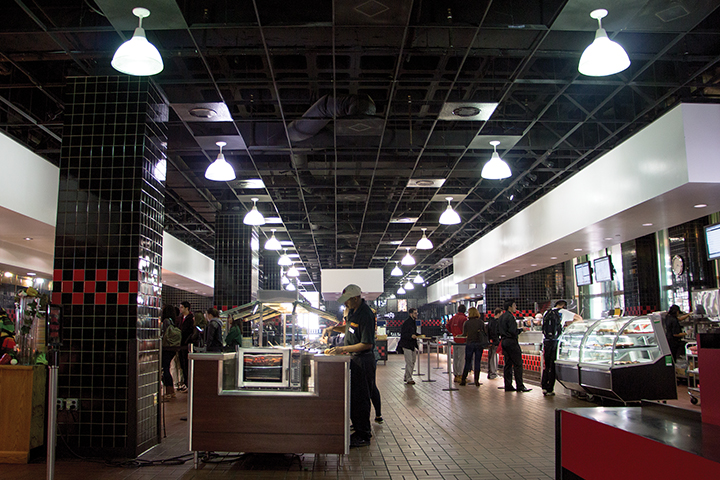 The University of Maryland, as a part of the Cool Food Pledge, is striving to promote sustainable eating habits on campus through the dining halls.

On the most recent season of The Good Place — a show about the afterlife and how our decisions are judged — the characters came to the conclusion that making ethical decisions is no longer as easy as it once was. Globalization and technology have made our world interconnected to the point that every action often comes with unintended consequences.

For example, in the 1700s, you could buy a peach from a farmer without having to think about how that peach got into your hands. Today, a peach comes with baggage: We have to think about what kinds of pesticides were used to grow it, whether the laborers were paid adequately and treated kindly, how much carbon dioxide was released while transporting it to your local grocery store.

This is the kind of thinking that fuels the Cool Food Pledge, a platform created by the World Resources Institute to help facilities produce quality food while cutting food-related greenhouse gas emissions. This is a great initiative, and I applaud the University of Maryland for being the first university to commit.

However, the changes in the dining halls are too understated — we should invest in initiatives that will push students to be more environmentally-conscious even after they leave college.

Currently, Dining Services plans to gradually shift away from serving so much meat without actually eliminating anything from the menu. It also wants to place a greater emphasis on plant-based foods and seafood. These changes are good, but we shouldn’t forget that the aquatic life on this planet is massively overfished, so we mustn’t rely heavily on seafood either. According to the United Nations Food and Agriculture Organization, about 85 percent of the world’s marine fish stocks are “fully exploited or overfished.”

My main issue with Dining Services’ plan, however, is its desire to “subtly educate” students on climate change and sustainable eating. The time for subtlety is over; the United Nations estimates that we only have 11 years left before the damage from climate change becomes irreversible. So many people, even those in our generation, need a come-to-Jesus moment about climate change.

The new menu changes are good, don’t misunderstand me. But they need to be paired with more aggressive initiatives that force students at this university to open their eyes. Yes, these initiatives would take resources, but perhaps instead of spending $41,700 to send crab mallets and Old Bay to incoming freshmen, we could instead spend that money on something that won’t get shoved in my closet 10 minutes after I receive it.

For example, Dining Services could contract someone to calculate the approximate carbon footprint of some of the most standard dishes in the dining halls. On the little plastic placard, it would say “Mac n’ cheese,” followed by its carbon dioxide emissions in kilograms.

This is obviously not an easy thing to calculate, especially for meat-based meals — you have to consider a number of factors, such as where the ingredients came from, how much carbon dioxide a cow, for example, would have released into the atmosphere while it was being raised for slaughter and how much energy it required to cook the meal itself. Also, the carbon dioxide emissions of a meal may not account for how sustainably that meal was made — what kinds of pesticides or irrigation does the farm use? How much deforestation took place to start the farm?

Even though this would be hard to calculate, it would be a constant reminder that there are consequences to every meal we eat. Over time, students would notice that plant-based meals, especially those locally sourced, have much lower carbon dioxide emissions. Then, out of a sense of responsibility, guilt or maybe even social pressure, they may seek out those foods with lower carbon footprints. There is a tangible toll attached to their meals; it makes the consequences harder to ignore.

This is not a perfect idea by any means, but it is an example of the kind of aggressive education we need about climate change. I’ve written columns in the past about how students at this university don’t know enough and are not adequately educated about recycling, composting or living sustainable lives. Dining Services has the perfect opportunity to influence thousands of students to be conscious about what they eat and how they live — I hope it takes advantage.