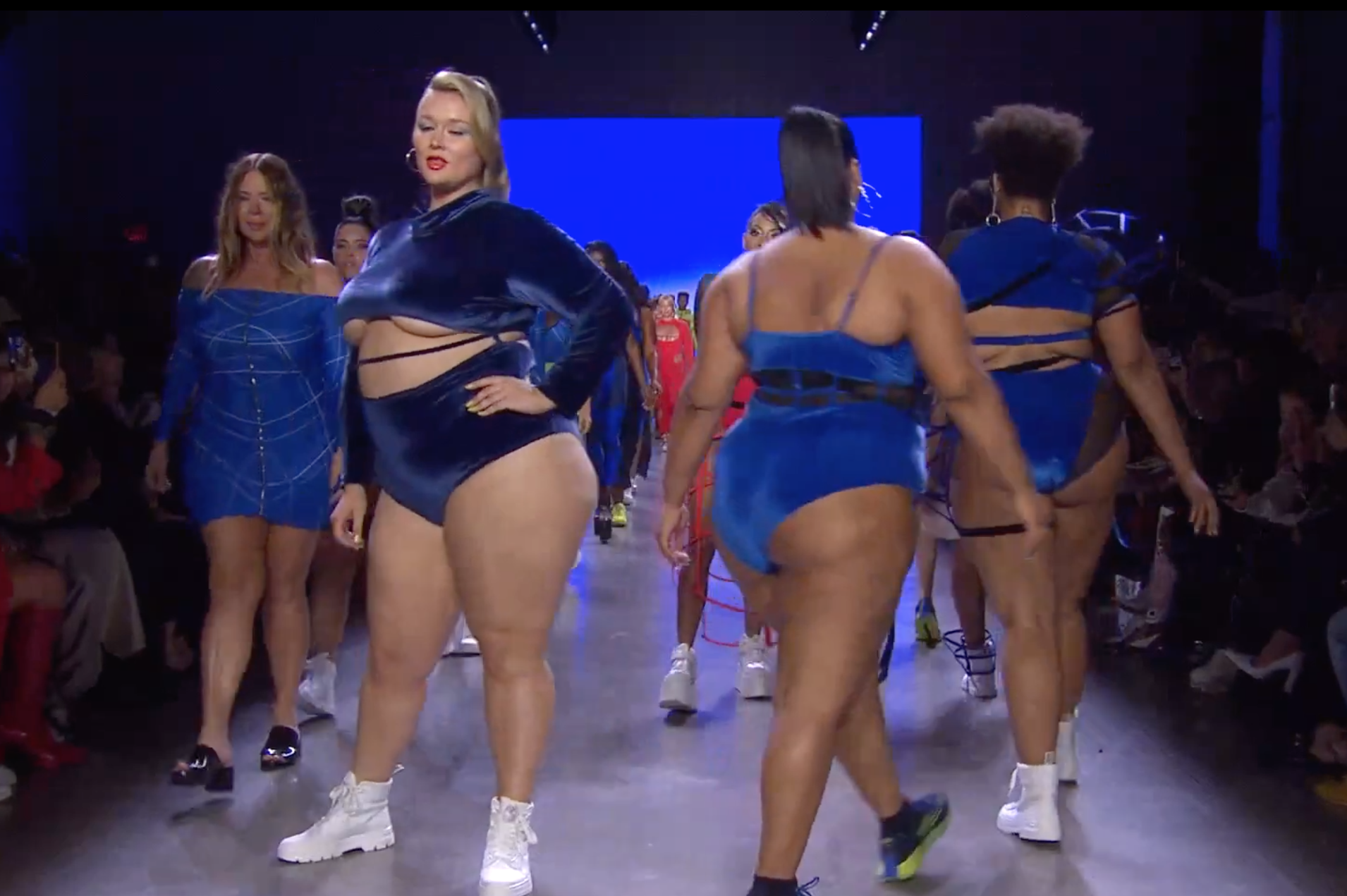 The fashion industry has long been an overwhelmingly white, elitist and classist field that perpetuated Eurocentric beauty standards and defined anything outside of that as “other.”

So it was refreshing to see designers defy that mold at this year’s New York Fashion Week.

Chromat, an American swim and bodywear brand, wowed attendees and online viewers with its inclusive runway show Saturday, which featured a cast that resembled the typical array of people that one is likely to see in the U.S.

There were several plus-size models (who were actually plus-size, and not just thick); a pregnant woman strutting down the runway in a pink velvet, strappy bodysuit; Ericka Hart in a white-caged outfit that showed her double mastectomy; a model with a prosthetic leg; kids of various ages; and DMV native and rapper Rico Nasty on the vocals.

Chromat’s show did more than display a new collection of pieces. It served as a statement of what the “average” woman looks like — which is nothing and everything at the same time. It’s impossible to define the average woman, because we come in various shapes and sizes. Our life experiences may alter our shape, but that’s not something to hide or be ashamed of. It should be celebrated to tell our story. And Chromat showed that.

[Read more: What is a VSCO girl, and how do I become one?]

Also combatting the idea of “average” was Prabal Gurung, a Nepalese-American designer. In his show notes, he recalled being asked, “Well, you don’t look American, so how can you define what America is?” in a business meeting. This made Gurung wonder what it actually means to be American and led him to works by Jose Antonio Vargas, the author of Dear America: Notes of an Undocumented Citizen. Vargas consulted on Gurung’s show.

Motifs of roses — the U.S. national flower — and the colors red, white and blue stood out as an intentional method of the designer to identify what is American. Perhaps the most striking part of the show, however, was the finale when models flooded the runway in sashes that read, “Who gets to be American?” The answer is left for viewers to discern.

While Chromat and Gurung used their shows as tools to celebrate diversity on a broad spectrum, award-winning designer Kerby Jean-Raymond of Pyer Moss used his show to celebrate black culture. The show did not take place in a fancy Manhattan warehouse, nor was it located in the artsy hub of Harlem, but rather at King’s Theatre in Flatbush, New York, the designer’s hometown.

The featured collection was the final installment in Jean-Raymond’s three-part series, “American, Also,” which debuted in Fall 2018. The purpose of the series is to reclaim the narratives surrounding American culture by highlighting the contributions of African Americans that have been blotted out of history books.

“I wanted to challenge the narrative for what’s typically [considered] ‘American’ and reverse the ratio of African-American exclusion in the conversation,” Jean-Raymond said to Teen Vogue in 2018.

The finale, titled “Sister,” paid homage to Sister Rosetta Tharpe, a black woman who was raised in the church and is credited by Jean-Raymond as the “founder of rock-and-roll.” Even the Rock & Roll Hall of Fame cited her as a model for Elvis Presley, Johnny Cash, Little Richard and others who are now credited as pioneers of the genre. Like many other aspects of American culture, the genre has been white-washed, which explains why conversations about rock-and-roll history seldom mention Tharpe.

The show featured a 90-person choir performing black culture staples from gospel songs to contemporary hip-hop; an all-black cast of models with a variety of hairstyles from afros and locs to braids adorned with gold hair-jewelry that dripped in regality; and of course, clothing pieces that spoke directly to the heart of the collection. Beautiful and unique silhouettes reminiscent of the ‘60s and ‘70s but with a contemporary twist unique to Pyer Moss graced the runway of King’s Theatre and made me wish I had the funds to partake in such a luxurious display of black art and excellence.