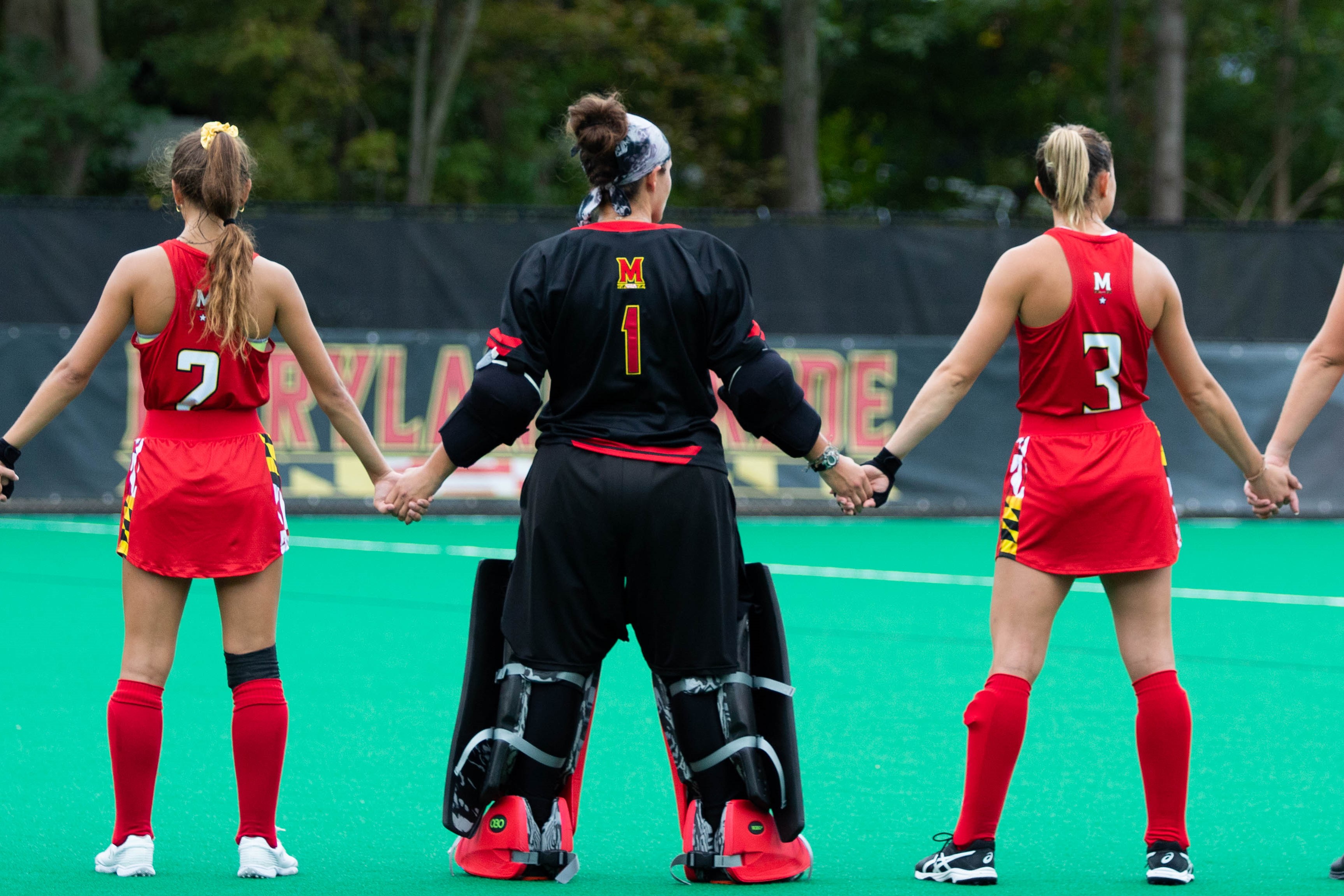 With 9:42 left in the third quarter of Maryland field hockey’s matchup against No. 3 Duke, the Blue Devils were awarded a penalty corner — amping up the pressure on a Terps squad that was trailing for the first time this season.

Maryland’s defenders lined themselves alongside goalkeeper Noelle Frost, who barked out instructions to the Terps’ backline, which subsequently charged at Duke’s penalty corner unit.

But the Blue Devils were prepared, with midfielder Haley Schleicher flicking the ball past defender Hannah Bond and into the path of defender Jillian Wolgemuth, who fired a low, driven shot toward the bottom left corner of the cage.

Frost dove quickly, and, using a combination of her stick and her pad, deflected the ball above the bar — the most acrobatic of her five saves that day. While Maryland’s offensive woes ultimately wasted Frost’s standout effort in the 1-0 loss, the senior’s clutch displays in the Big Ten/ACC Cup were the highlight of her impressive start to the season.

“It’s great to have [Frost] back there,” forward Jen Bleakney said. “It puts a lot of trust [in us].”

[Read more: No. 2 Maryland field hockey falls for first time this season in 1-0 loss to No. 3 Duke]

Frost played in nine games last season, going 4-0 with 1.84 goals against average. And given her solid showings then, the Terps had confidence in her ability to replace the production of last season’s starting netminder, Sarah Holliday.

“Noelle has been here for quite some time, she redshirted, she’s done her time,” coach Missy Meharg said at the beginning of the season. “She’s a fabulous goalie and she’s ready.”

Goalkeepers are expected to command their circle and help guide their defenders — responsibilities Frost has taken head on.

“We have a pretty good synergy,” junior defender Bodil Keus said earlier this season, “I’m kind of used to how she’s coaching me and how she’s handling the situation right now. I’m pretty satisfied with it.”

And Frost rewarded Meharg’s faith with a series of solid displays in the first two games of the season, conceding one goal out of six shots on target.

Going into the Big Ten/ACC Cup, the Terps were expecting to face more shots against the firepower of Duke and Boston College’s attacking personnels. But Frost responded well to the increased pressure on goal, making three saves to propel Maryland to a 3-1 victory over the Eagles on Friday.

She followed that up with her display Sunday against the Blue Devils as Duke bombarded the goal with shots, particularly in the first half. Duke let off six shots in the opening 30 minutes, with Frost saving four of them to give Maryland a chance in the second half. Frost credited the saves to the increased synergy among the backline, as it reduced the quality of the chances the Blue Devils created.

Frost’s efforts over the weekend bumped her save percentage up to 0.786, placing her among the top 20 goalkeepers in the NCAA for that statistic. And with games coming up thick and fast for the Terps, the team will continue to lean on Frost’s heroics as it looks to get back on track.