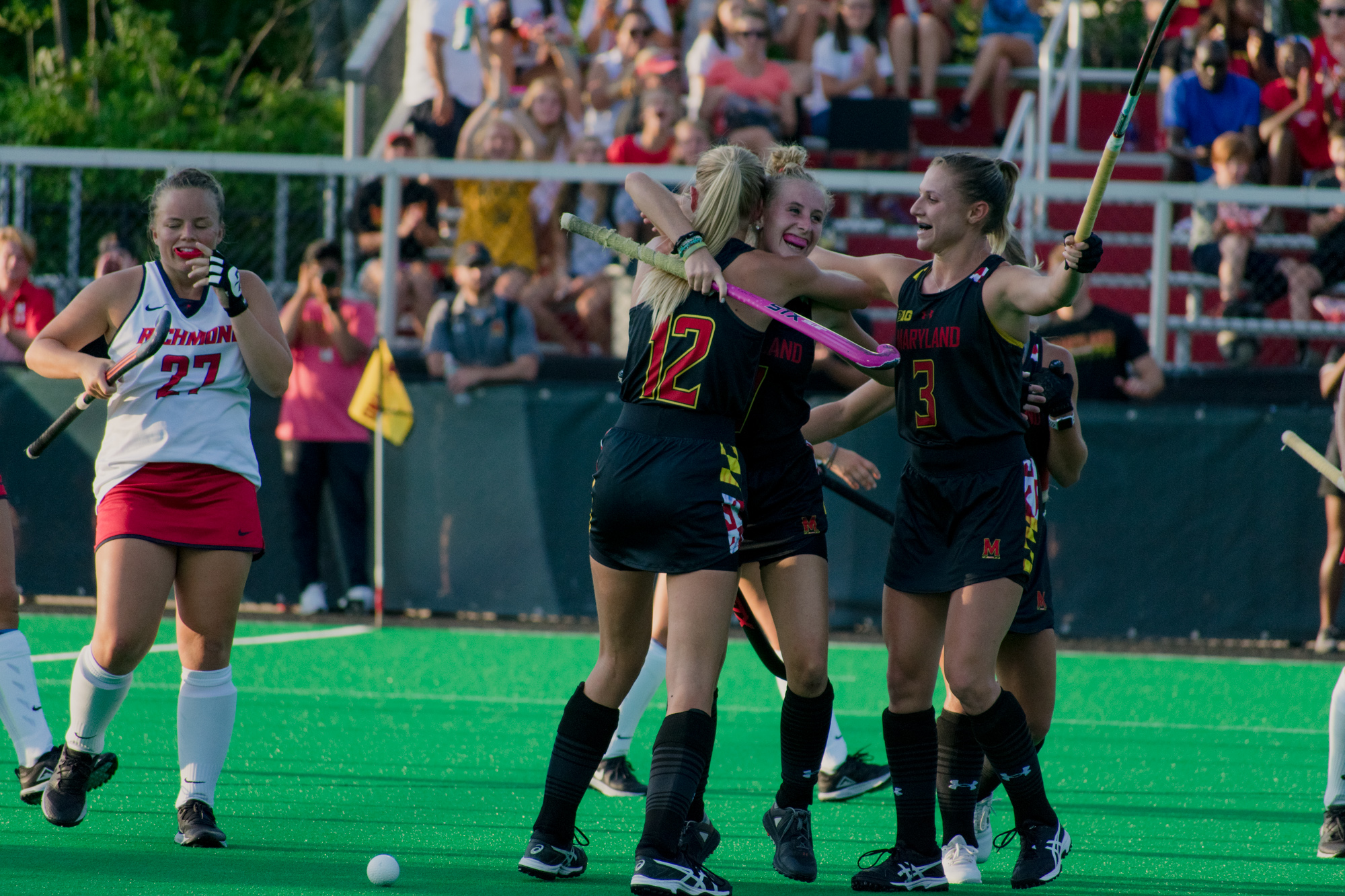 With Maryland field hockey up 2-1 in the fourth quarter against No. 13 Boston College, fans would have been forgiven for expecting the Terps to take a more defensive approach — especially after the Eagles peppered goalkeeper Noelle Frost with four shots in the final minute of the third quarter.

Despite those expectations, Maryland maintained the attacking pressure, with freshman midfielder Linda Cobano eventually lacing a Bibi Donraadt penalty corner into the top corner of the cage with seven minutes left to give the Terps a two-goal lead, one they wouldn’t relinquish.

And while No. 2 Maryland wasn’t infallible, its commitment to attacking field hockey pushed the team to a 3-1 victory over Boston College on Friday.

“We sustained an [attacking] brand of hockey,” coach Missy Meharg said. “Scoring a goal in three of the four quarters is nice.”

The Terps traveled to Evanston, Illinois to take on the Eagles in the first match of their two-game slate against ACC competition in the Big Ten/ACC Cup. And after combining for 10 goals in its previous two games, Maryland hoped to put up another impressive offensive display.

The first quarter was played at a frenetic pace, with Maryland midfielders Brooke DeBerdine and Madison Maguire pressing defenders and carrying the ball deep into Boston College’s half. Despite owning the lion’s share of possession, though, the Terps struggled to dissect the Eagles’ backline. Donraadt had an effort saved by Boston College goalkeeper Joanna Kennedy early in the first period, but Meharg’s squad failed to record another shot until 2:55 remaining in the frame.

That shot, though, would prove to be the breakthrough.

Forward Jen Bleakney deflected a Kelee LePage pass onto goal, forcing a kick save from Kennedy. The subsequent rebound fell into Maguire’s path, who whipped the ball around two defenders and into the cage, giving Maryland a 1-0 lead.

That lead didn’t last long, however, with the Eagles pressing the Terps into conceding a penalty corner near the end of the first frame. Boston College forward Jaime Natale then deflected the resulting attempt past goalkeeper Noelle Frost to tie the game.

“It was a very well-executed corner,” Meharg said, “[Natale] is very good at deflections. We’ll take a look at it on video and figure out if we’re in that situation again with a similar-type player in that corner, we need to step up and step on her stick.”

[Read more: Maryland field hockey is up for the challenge of two ranked foes in “double weekend”]

Despite the late equalizer, the Terps continued to dominate possession in the second quarter. They began to pass the ball into more dangerous areas, earning three penalty corners. Junior defender Bodil Keus was particularly active, forcing three saves from Kennedy in the second frame.

“I thought we did a good job [at keeping possession],” freshman midfielder Emma DeBerdine said. “I think we worked well using our small passing and that really helped us get around BC.”

Maryland’s incisive passing eventually paid off, with DeBerdine firing a shot off of a Boston College defender to break the 1-1 deadlock.

“It was definitely surprising because it went off the defender’s stick,” DeBerdine said. “But it was really exciting.”

The Terps got off to a quick start in the third quarter, recording three shots in the first five minutes. However, Boston College — held quiet for much of the first half — found its footing toward the end of the quarter, with Frost making two crucial stops to help Meharg’s squad maintain the lead entering the fourth.

With Boston College pressing for an equalizer, the fourth quarter was a nip-and-tuck affair. Keus, DeBerdine and Donraadt all had shots skim just past the goal. But it was Cobano — the Hanover, Germany, native who was ruled eligible this week after missing the first two games — who scored the goal that confirmed the victory for the Terps, who move to 3-0 on the season.

“When we opened up in that final quarter, we went at them,” Meharg said. “Going up 3-1 is a nice difference — a lot nicer than a one-goal difference.”

In its first ranked matchup of the year, Maryland proved it could overcome top competition. That challenge will only grow larger with a bout against No. 3 Duke looming Sunday.

“Duke is a very good team … so it’ll be a tough game,” Maguire said. “But I think that if we play the way we play and not play the way our opponents want us to play, I think we can come back with two wins this weekend.”