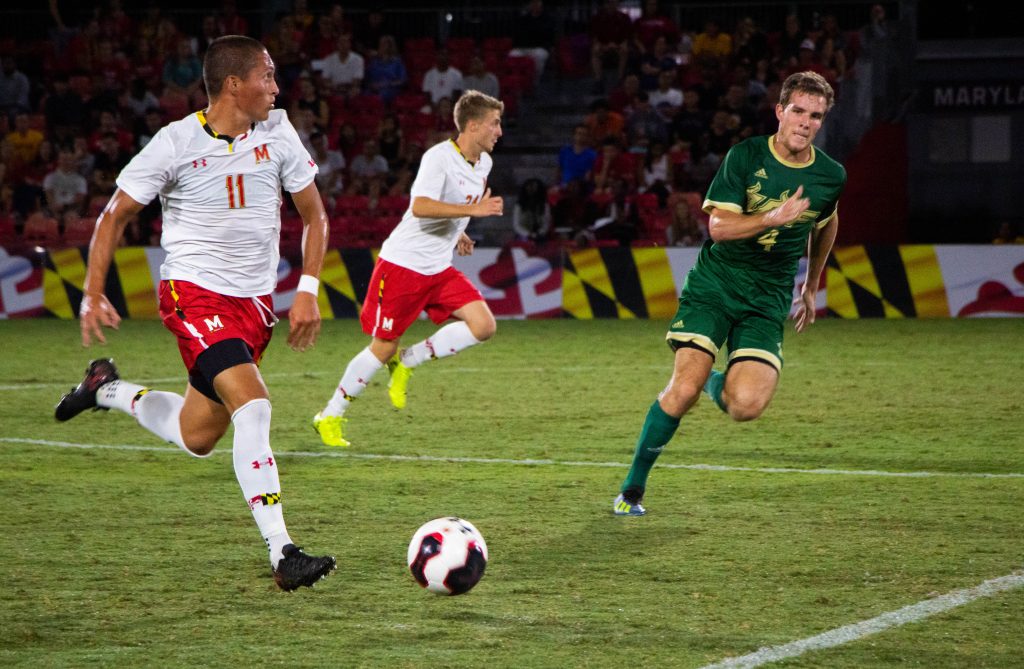 In the 90th minute of the Maryland men’s soccer team’s 3-2 loss to UCLA on Friday, coach Sasho Cirovski was shown a yellow card for repeatedly getting in the ear of an official along the sideline.

Cirovski’s incensed discussion with the referee came after nearly 89 minutes of watching his team teeter between showcasing the qualities he implores and committing uncharacteristic mistakes.

Cirovski left that opening match impressed with his reworked backline which featured new faces at two positions and an unsettled goalkeeping battle.

“Our pressure all over the field was smothering — it reminded me a little bit of what we looked like at the end of last year,” Cirovski said following the win. “When we can defend like that, we’ll have a chance to win any game.”

But a sharp regression since then has led to unwanted results in each of the past two games.

Against Virginia, Maryland survived defensive breakdowns in the first 20 minutes of an early Cavaliers charge, but eventually succumbed to the pressure two times within a 135-second span.

In Los Angeles, the Terps’ defense couldn’t recover in transition and left Iloski a chance to cap off the Bruins’ counterattack with a goal from inside the box. Then, in the 51st minute, Iloski found a pocket of space just outside of the box to receive a pass, free himself and unleash a shot that found the back of the net.

Iloski’s night culminated with a hat trick on an individual effort in transition that left goalkeeper Russell Shealy and defender Brett St. Martin desperately sliding and diving before he easily finished in front.

In the 19th minute of the loss to UCLA, Shealy took to the ground in an effort to stop Iloski’s bid in transition. The redshirt freshman looked to be in a position to make the save but ultimately failed to corral the ball before it trickled across the goal line.

When he got to his feet, Shealy kicked the goalpost in frustration.

Shealy’s first start was far different. It was devoid of any reasons for frustration as his defense allowed just two shots against USF — both of which he made routine saves on.

Against the Bruins, Shealy was under duress — both in settled offense and in transition — due to the defensive breakdowns that led to five shots on goal.

But in the 62nd minute, he didn’t help his own cause. The ball came flying to his area, where he was in position to seamlessly recover it before a pressing Iloski could reach him. But Shealy allowed the ball to bound away from him and into Iloski’s possession.

As Shealy gave chase along the end line, Iloski calmly maneuvered the situation and slotted his shot into an open goal.

Iloski’s first goal and third goal both show up as blunders on Shealy’s resume, as he continues to battle freshman Niklas Neumann for the permanent starting goalkeeper position.

Following the loss to Virginia, Cirovski said his team needed to get back to embracing its role as “the hunter,” instead of being content as the reigning national champions.

The attack responded to its coach’s request and established an early possession advantage that led to an early goal.

In the sixth minute against UCLA, midfielder Eli Crognale led forward Eric Matzelevich into the box with a through ball that left the junior with a prime chance. Matzelevich’s initial shot was saved, but he recovered the rebound and scored.

Throughout the game, the attack continued its connected effort and generated chances, a stark contrast from the 2-0 loss to Virginia, where it failed to generate many threatening opportunities.

UCLA goalkeeper Justin Garces was forced to make several desperate saves as the Terps bared down on the Bruins’ defense — showcasing a persistent attacking style that Cirovski looks for on the offensive side of the field.

Eventually it paid off again in the second half, when Maryland earned a free kick just outside the box. Forward Brayan Padilla took the set piece and beat Garces with a shot to the upper corner to cut the Terps’ deficit to 3-2.

As Cirovski’s squad sought the equalizer, the attack remained aggressive, forcing Garces to make two difficult saves and punch away crosses to cling to the lead.