Maryland men’s soccer doesn’t have a clear No. 1 goalkeeper, but the team is unfazed 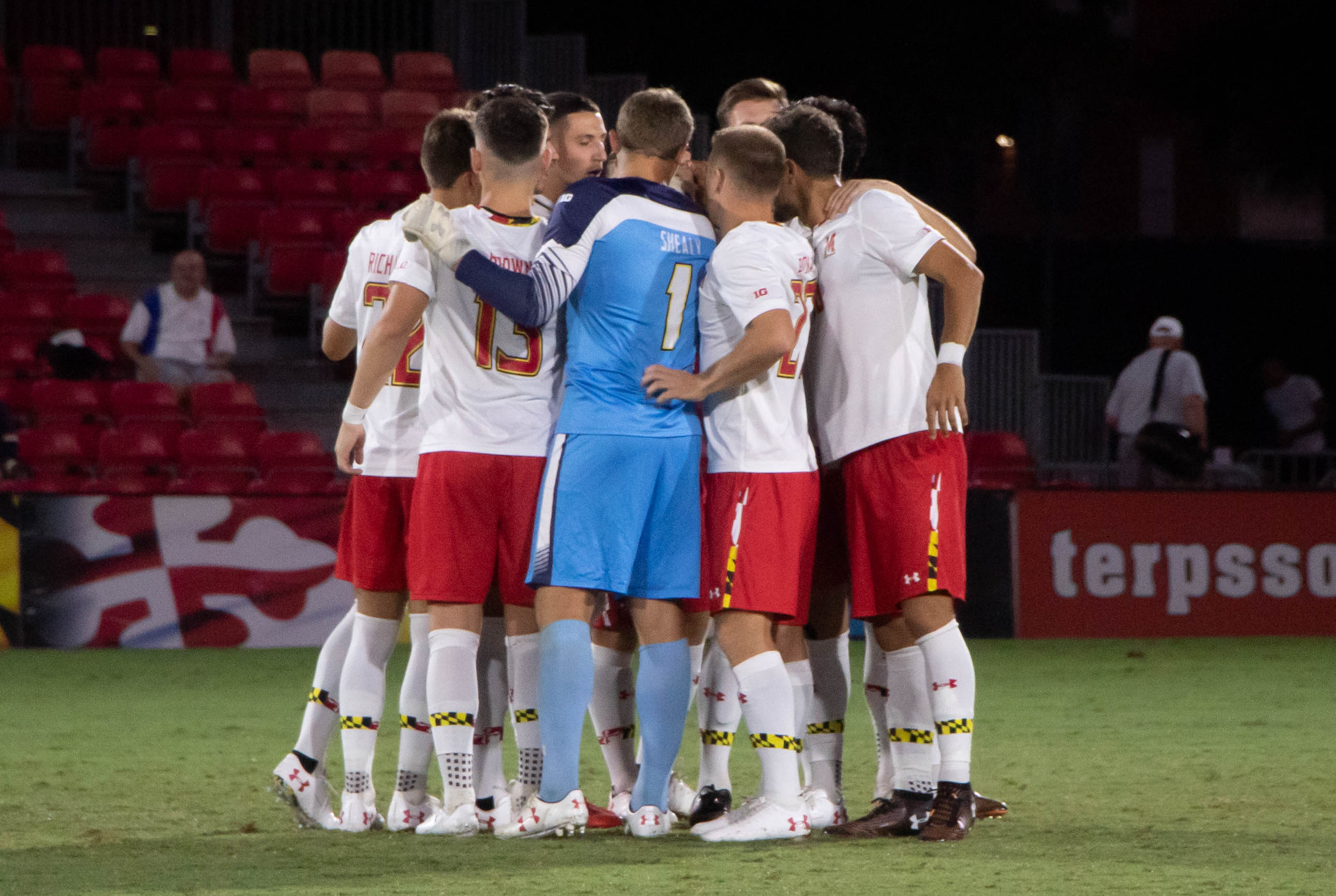 Goalkeeper Russell Shealy and the rest of the Maryland men's soccer team huddles ahead of its 1-0 win over USF on Aug. 29 at Ludwig Field. (Julia Nikhinson/The Diamondback)

In the late stages of the victory, goalkeeper Russell Shealy needed to make only one save on a weakly hit ball from a bad angle that floated seamlessly into his waiting arms.

Conversely, early on against the Cavaliers, goalkeeper Niklas Neumann was forced to make acrobatic stops and saw another shot carom off the crossbar before Virginia broke through with two goals in a 135-second span.

As Shealy and Neumann compete with one another for the right to be named the team’s permanent starting goalkeeper, coach Sasho Cirovski has been encouraged with what both showed in their respective outings despite drastically contrasting defensive performances in front of them.

“Both of our keepers I think have done well the first couple games,” Cirovski said after the 2-0 loss to Virginia on Monday night. “Goalkeeping is not our problem at this point.”

Shealy and Neumann have been competing since the preseason to become the No. 1 goalkeeper as the team looks to replace Dayne St. Clair, who manned the position for every minute of every match the last two seasons.

Cirovski has employed a patient approach to finding that replacement, though, and held an open competition for the duration of the offseason. Shealy and Neumann emerged as the top options, but the long-time coach is still platooning the two at the start of the season.

“Obviously some really talented goalies,” forward Eric Matzelevich said. “Last year, Dayne was incredible between the net. … It’s probably the healthiest competition you can have.”

Against the Bulls in the team’s opener, Shealy was the benefactor of a suffocating defense that allowed just two shots overall, both of which the redshirt freshman saved easily. Defenders were constantly in position to clear balls and intercept passes in an effort that reminded Cirovski of the team’s hounding defense from 2018.

[Read more: Despite inexperience, Maryland men’s soccer has faith it can rebound from loss to Virginia]

But the Cavaliers extinguished that bright spot in Monday’s bout at Audi Field with an overwhelming onslaught in the final third during the first 25 minutes.

The one-sided beginning started in the third minute when a cross sailed beyond two Maryland defenders to forward Nathaniel Crofts, who ran unmarked into the box for a one-timed shot. While Neumann reacted quickly to make an unlikely stop, it was an inauspicious start for the defense.

Virginia reeled off five more shots in the opening 15 minutes — including one that ricocheted off the crossbar. In the 21st, Neumann made another leaping save to keep the Cavaliers off the scoreboard, but no Terps’ defender was in position to clear the rebound, and Crofts capitalized with the opening goal.

Just over two minutes later, forward Daryl Dike was given too much time and space at the edge of the 18-yard box and delivered a shot to the upper-right corner that left the freshman goalkeeper flat-footed.

“We didn’t help Niklas out too much today,” defender Ben Di Rosa said after the loss. “[But] I thought he made some big-time saves for us.”

In Cirovski’s eyes, both Shealy and Neumann have areas to work on in terms of distributing the ball and making sound decisions in that phase, but he’s been otherwise pleased with the efforts shown.

As the team moves forward with a 1-1 mark on its ledger, Cirovski said the competition between the two freshmen goalkeepers will continue.

“We may do that the whole year until one steps up and shows that he can be the leader in the back,” Cirovski said. “Both guys are doing well. They’re working hard.”