Despite inexperience, Maryland men’s soccer has faith it can rebound from loss to Virginia 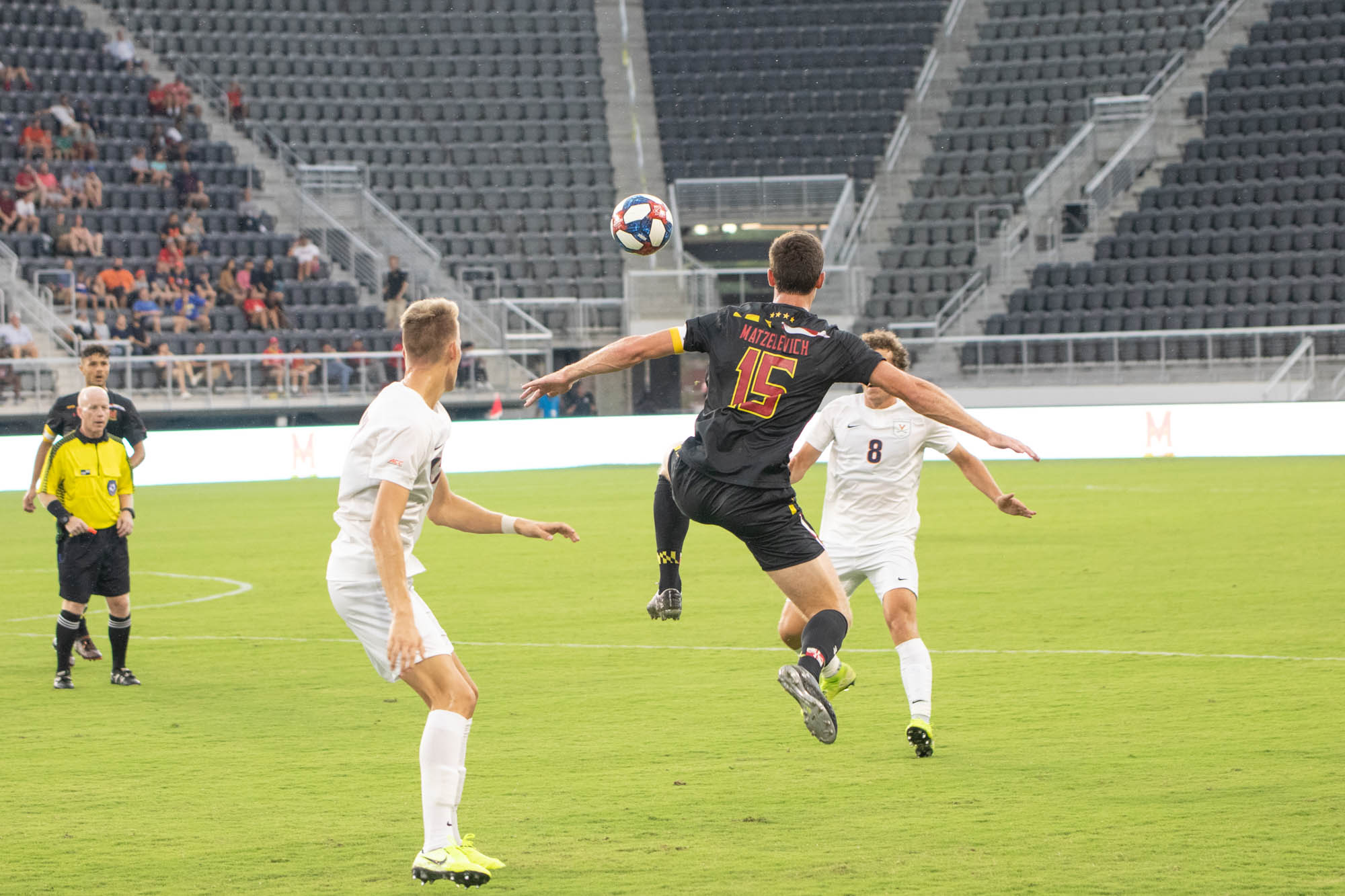 Following No. 1 Maryland men’s soccer’s Monday night 2-0 loss to No. 12 Virginia at Audi Field, forward Eric Matzelevich positioned himself in front of reporters — and a video camera — for the post-game media availability.

Upon doing so, the junior peered into the camera’s lens and jokingly checked his appearance in the reflection.

The lighthearted moment exemplified an experienced player who has navigated the ups and downs of a season and doesn’t let an uninspiring early-season effort ruin morale.

Despite what he called a disappointing effort, coach Sasho Cirovski expects his team to respond well and grow from the defeat by soaking in film sessions and making the most of their time on the training ground.

“We’ve got tremendous young men with great hearts and good quality,” Cirovski said. “It’s just a matter of trying to work through some of this stuff and find our mojo.”

If Maryland players need tangible evidence of putting losses in perspective, they need not look further than last season. In 2018, multiple shaky performances had a galvanizing effect on the Terps.

It prepared the team for a postseason run, culminating with hoisting the national championship trophy in Santa Barbara, California.

But Matzelevich also realizes it’s unlikely this year’s squad follows the same path as that national championship team. To remain resolute and undeterred in its quest to enjoy a similar fate, this Maryland roster will need to continue building rapport.

“Last year is last year, and it’s something we can learn from,” Matzelevich said. “But we’re starting to write a new chapter this year.”

The Terps’ starting lineup against Virginia was composed of just two regular starters from last season, with five players stepping into bigger roles and four members of the roster who had not started a match for Maryland before this year.

[Read more: Under the lights in his first college game, Malcolm Johnston shined for Maryland soccer]

Midfielder William James Herve, an experienced cog in the attack, was unavailable for the match due to an injury sustained in the season opener against USF, which forced Cirovski to go even deeper into his pool of relatively inexperienced reserves.

The Cavaliers squad has experience in big moments and did not shy away from establishing itself as the aggressor in a rivalry game at a professional venue.

From the game’s opening kick, Cirovski noticed his team failing to match Virginia’s intensity, and as a result, the Terps conceded two goals in the first 23 minutes, along with three other quality chances.

“We expect to win every game. So it’s definitely tough, and it’s definitely a shock to them,” Di Rosa said. “We’ve just got to help them out, realize that it’s a long season.”

Cirovski and the Terps program have a motto: “File it,” which refers to the importance of keeping prior results — favorable or not — on record, while also moving forward with future business.

As Maryland attempts to rebound from its first defeat since October 2018, the 26th-year coach expects everything to come together in due time.