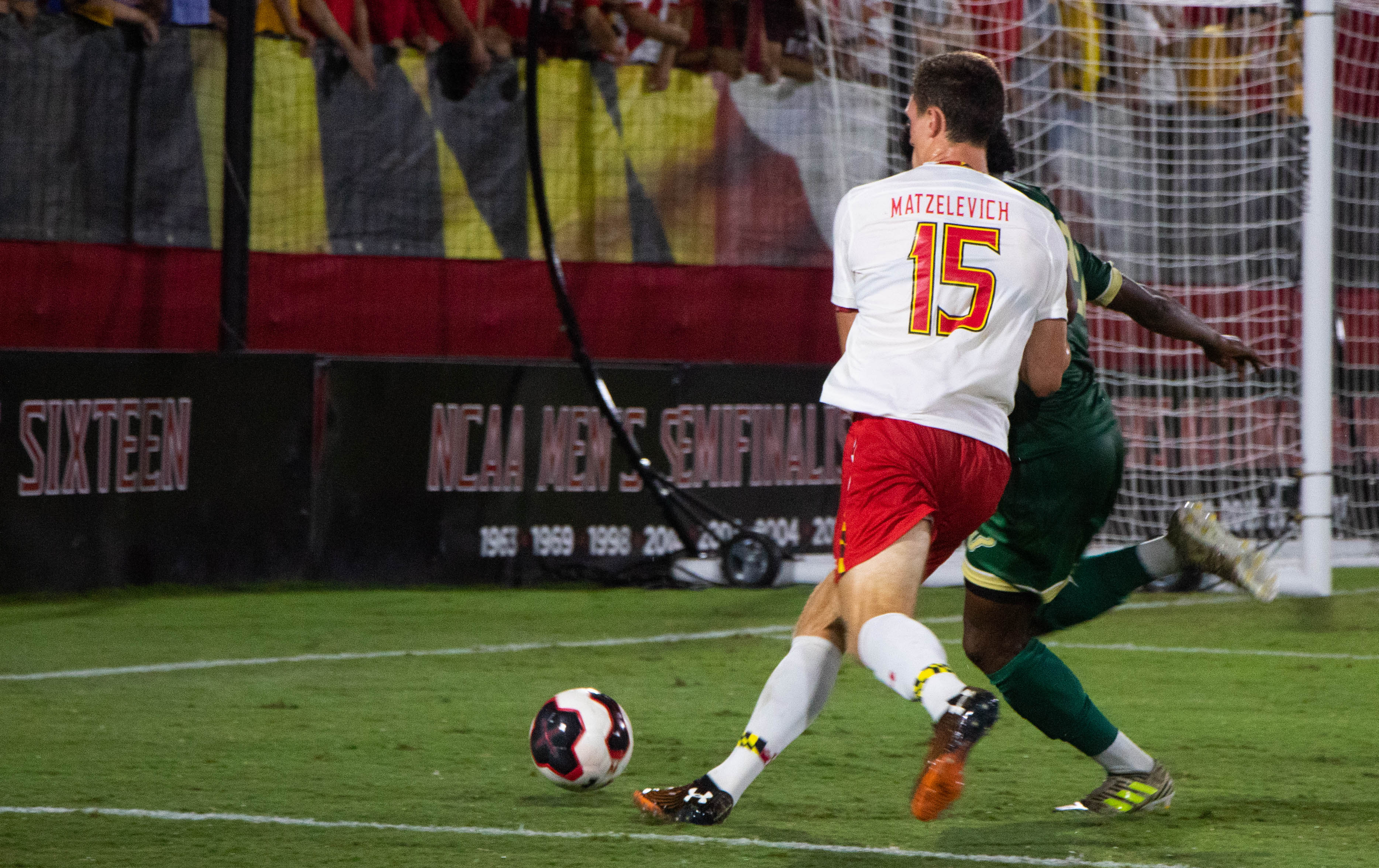 No. 3 Maryland men’s soccer sprinted out of the gate with a goal in the sixth minute to stake an early lead, but the Terps defense eventually found itself chasing UCLA forward Milan Iloski in transition chances.

Despite all efforts to slow the junior down, Iloski picked apart coach Sasho Cirovski’s defense using a multitude of moves.

A counterattack score, a pinpoint shot from distance and a standout individual effort netted Iloski a hat trick in the Bruins’ 3-2 win over Maryland on Friday night at Wallis Annenberg Stadium in Los Angeles.

After a flat start against Virginia where Cirovski said his team didn’t match the intensity the Cavaliers brought with them to Audi Field, the Terps began the West Coast bout with an inspired effort.

Maryland established an early possession advantage and sought out the initial score. Midfielder Eli Crognale accepted a pass, turned and led Eric Matzelevich into the box with a through pass five minutes into the match.

The senior forward settled the ball and tried to fire past goalkeeper Justin Garces, who came off his line to apply pressure. Garces stopped the first shot, but the rebound fell right to Matzelevich, whose second attempt hit the back of the net.

As the Terps tried to tack on another goal, a corner kick deflected out and gave the Bruins a chance to strike on the counterattack in the 19th minute.

UCLA sprinted out in transition, and midfielder Eric Iloski found his brother, Milan, to goalkeeper Russell Shealy’s left. Milan Iloski sent a shot on cage, where Shealy was in position, but the redshirt freshman keeper couldn’t corral it, and the ball dribbled over the line to equalize the score.

Shealy, who’s engaged in a battle with true freshman Niklas Neumann for the permanent starting spot, turned and kicked the goalpost twice in frustration.

Just over five minutes into the second half, with the score level at 1-1, forward Brayan Padilla was the beneficiary of a deflected ball at the outside of the box, where he sent a shot through to Garces. But the Bruins goalkeeper held firm, knocking the shot down and swatting the ball away just before it crossed the goal line.

Twenty seconds later, UCLA had already traversed to the other end of the field, where Milan Iloski took a pass beyond the box and sniped a shot to the top-right corner. Shealy’s diving effort was to no avail, as the ball sailed past him to give the Bruins the advantage.

Milan Iloski broke away from the Maryland defense once again in the 62nd minute, forcing the Maryland goalkeeper to come off his line. But as Shealy attempted to reel in the bouncer on the edge of the 18-yard box, the ball skipped past him, and Iloski blazed past the goalkeeper, too, saving the ball from going out of play.

In the 71st minute, as the Terps hunted to get back in the game, UCLA midfielder Riley Ferch committed a foul just outside the box. Moments later, Padilla stood poised over the ball and slotted his free kick to the upper-right corner to best Garces.

Maryland threatened to find the equalizer and force extra time, but Garces came away with pivotal stops to help the Bruins escape.

With the defeat, the Terps fell to 1-2 on the season ahead of a national championship rematch against Akron on Sept. 13 at Ludwig Field.