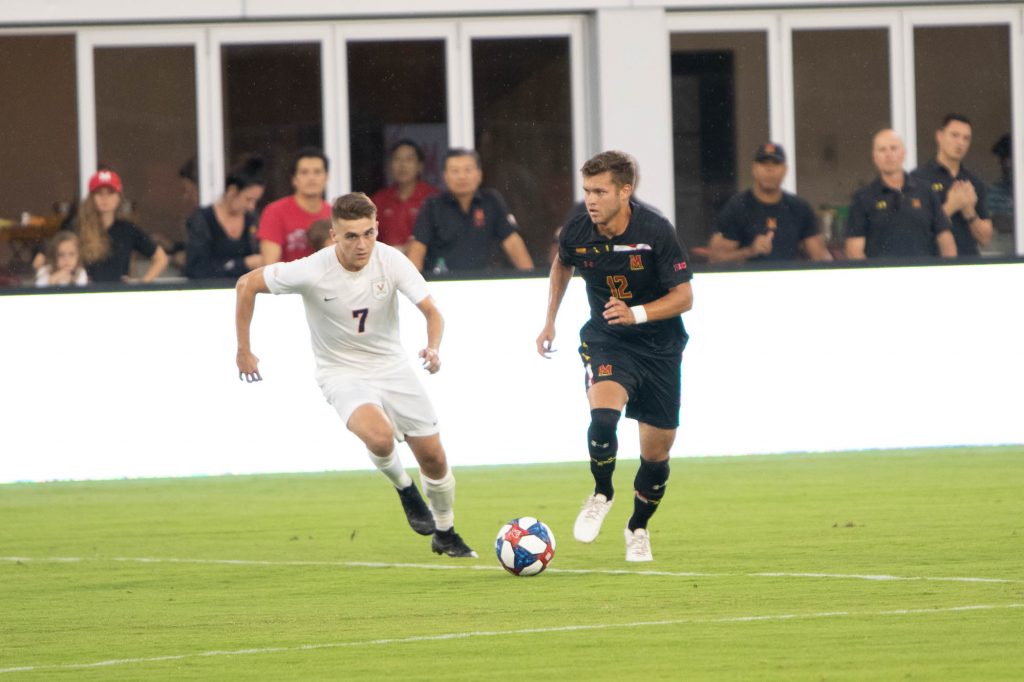 When coach Sasho Cirovski looks to the UCLA bench during the Maryland men’s soccer match on Friday night in Los Angeles, he’ll see somebody other than Jorge Salcedo stalking the Bruins’ sideline for the first time since 2003.

Salcedo resigned in March following his indictment in the college admissions scandal. So, Cirovski will now match wits with Ryan Jorden, the fourth UCLA coach he’ll face since taking the helm of Maryland soccer in 1993.

While the newest edition of the rivalry includes plenty of new faces, the 26th-year coach doesn’t expect it to lose its luster.

“The game isn’t between the coaches — it’s between the players and programs,” Cirovski said. “UCLA’s become a major game for us every year, and I know all the players on both sides really enjoy it.”

Cirovski first became acquainted with the Bruins in the 2001 season opener, when the Terps pulled out an overtime win. The next year, the rivalry took shape when UCLA topped Maryland, 2-1, in the NCAA semifinals, denying the Terps on their quest to a first national championship since 1968.

The tilt became a fixture on the schedule, with six matchups between 2003 and 2012. After a brief hiatus, the rivalry renewed in 2015. It’s only escalated since, with the Terps settling two matchups in overtime sessions, both thanks to heroic finishes from former forward Sebastian Elney: a 2-1 win in 2015 and a 3-2 win in 2017.

“It’s always a big game when we play UCLA. Growing up in Maryland, I always came to UCLA games and [I] loved seeing the atmosphere,” said Brett St. Martin, a Mount Airy native. “This time, going to L.A., it’s a different atmosphere, and we’re ready for the task.”

St. Martin, a sophomore defender, has aged out of the stands and onto the field. Other faces have also come and gone — of the 16 Maryland players who appeared in last season’s match, 10 will not suit up on Friday night, either by way of offseason departures or injuries.

On the other side, the Bruins return seven players who appeared in the 2018 bout at Ludwig Field, which ended in a 1-0 win for the visitors. While UCLA may have a slight edge in its experience, its players have had to adjust to a new coach.

And though the Bruins enter this season’s contest with a 1-1 record, Cirovski saw a team that could have won against Big Ten contender Indiana before falling in double overtime to the Hoosiers.

“They’re a good team, I think they have sort of a new energy with a new coach that you get,” Cirovski said. “They look like they’re playing pretty free.”

Cirovski’s focus, though, will be on getting his own squad, which enters with a 1-1 mark, rejuvenated after it dropped a regional rivalry game with then-No. 12 Virginia on Monday night. As the team leaders try to get the Terps back in a groove, they’ve taken to the film room and training ground to address the pressing issues that surfaced in the 2-0 loss.

St. Martin echoed Bergmann’s sentiments, saying practice this week has emphasized improving their own play, rather than just focusing on the style Jorden and the Bruins might employ.

Friday night’s match is just another test in a marquee game for Cirovski’s squad — against a team the veteran coach is all too familiar with.

And he wouldn’t have it any other way.

“We seem to have big rivalries with all the very big programs,” Cirovski said. “And that’s by design. Because that’s the kind of games that excite me, excite the players [and] excite the fans.”