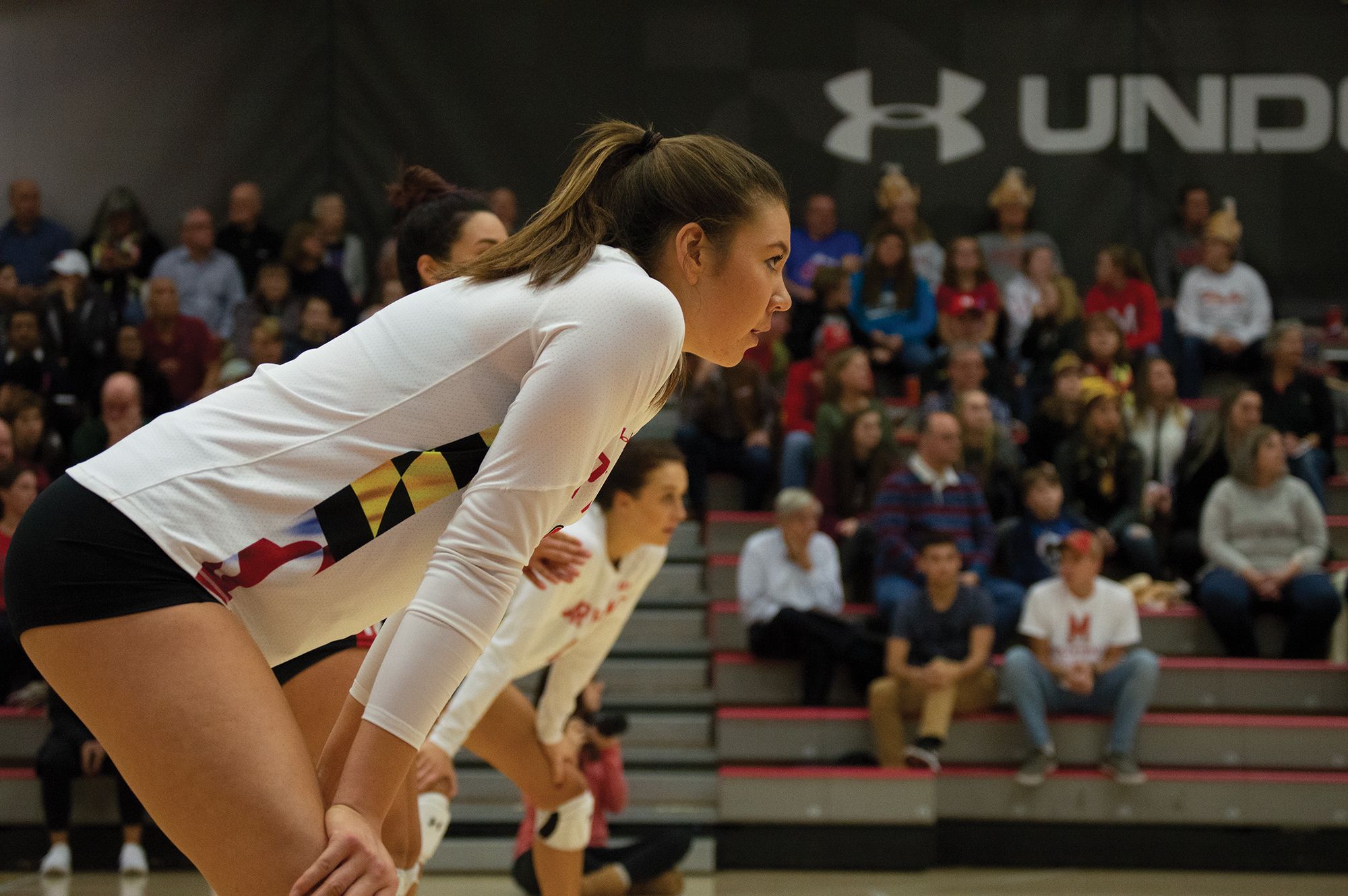 Outside Hitter Erika Pritchard prepares for the serve during Maryland’s 3-1 loss to No. 3 Minnesota at Xfinity Center Pavilion on Nov. 16, 2018. (Joe Ryan/The Diamondback)

Holding a slim 12-11 lead in the fifth set against UT-Rio Grande Valley — just three points from victory — Maryland volleyball suddenly couldn’t get out of its own way.

Setter Samantha Snyder followed up a bad set with a ball-handling error, and outside hitter Erika Pritchard capped the miscue-filled run with an attack error.

Four days after escaping with a 3-2 win over Howard despite committing 16 service errors — more than in any of their games last season — the Terps this time were punished for untimely errors. Pin hitter Barbara Silva’s match-winning kill was the lone point produced by the Vaqueros in their final four tallies to end the contest.

A bump from libero Allegra Rivas, a set from Snyder and a powerful kill from Pritchard gave Maryland its first point of the Friday night match against UT-Rio Grande Valley (4-1). The Terps began the affair on an 11-4 run, which included kills from five different players, before going on to win the first set, 25-17.

Maryland (3-1) regressed a bit in the second set, eventually falling 25-18. The second set featured three service errors, a facet the team wanted to be better in after Monday’s five-set victory in College Park.

In the UTSA Classic opener, the Terps’ saw a balanced offensive effort. Middle blockers Rainelle Jones and Katie Myers each finished with eight kills, and both outside hitter Rebakah Rath and Pritchard notched double-digit put-aways.

Things tightened up in the fourth set as neither team led by more than four at any point. But despite leading 20-17 late in the frame, the Terps dropped the set 25-22, with the Vaqueros closing out on an 8-2 run.

Maryland also struggled to contain Silva, who posted a match-high 19 kills on a .341 hitting percentage. Outside hitter Sarah Cruz also recorded 16 kills and 11 digs, setting up a decisive fifth set that resulted in a UT-Rio Grande Valley win.

In a set with five lead changes, three miscues in a row turned the match away from the Terps for good, opening the UTSA Classic in disappointing fashion after winning their first three matches of the season.