A Syracuse beat writer tells us what to expect from the No. 21 Orange 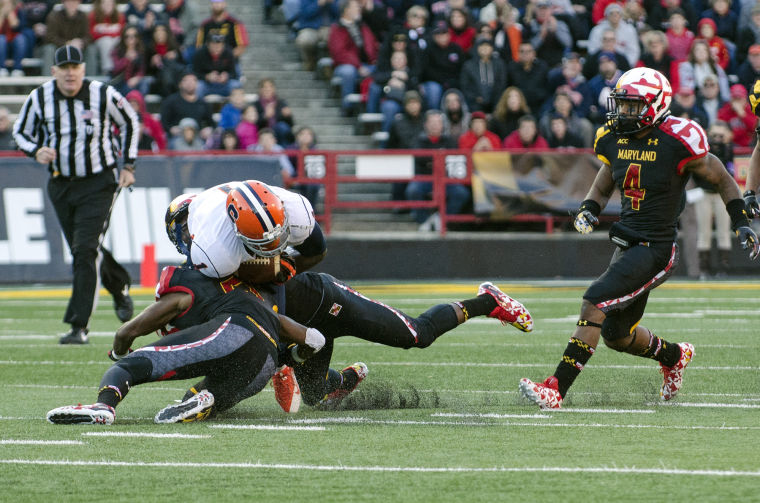 Orange wide receiver Ashton Broyld is tackled by Terps defensive backs Sean Davis and Alvin Hill during the Terps' 20-3 loss to the Syracuse Orange on Nov. 9, 2013.

The first big test of the Mike Locksley era at Maryland is almost here, as the Terrapins host the No. 21 Syracuse Orange on Saturday. Ahead of the game, we caught up with Josh Schafer of The Daily Orange. Our conversation has been lightly edited for clarity.

Last year, Syracuse lept to 10 wins following two four-win seasons to start Dino Babers’ tenure as coach. What were the biggest changes from 2016/17 to 2018?

2018 was Dino Babers’ third year at Syracuse, and it was clear his system had begun to settle in. By last season, many of the starters had been with Babers all three years and understood how to execute the fast-paced offense at a different level than in years past. And while the offense succeeded, perhaps the biggest change came defensively, where Syracuse finished tied for second in the nation in turnovers and had two defensive ends with 10 sacks.

Eric Dungey graduated as one of the best quarterbacks in Syracuse history. How do you expect Tommy DeVito to fill his shoes?

DeVito looked more than capable of leading the offense when he played significant snaps last year against Florida State and North Carolina. Against Notre Dame, DeVito was far less impressive, but the Orange were generally outmatched in that game anyway. DeVito’s probably a better pocket passer than Dungey and can do some damage picking defenses apart, particularly with a dangerous long ball. He just needs to settle into the offense.

Week 1 for the Orange was a 24-0 win at Liberty. What did Syracuse do well, and what do they need to improve on?

The Syracuse defense allowed negative net rushing yards against the Flames and caused three turnovers. In a 24-0 victory, the defense played as one would expect against an opponent like Liberty. The Orange struggled to pass the ball, though, and it’ll be interesting to see how much that improves this week against Maryland. I’m not sure if Syracuse can survive solely on the run game again this week.

Who are some players to watch for Syracuse? Who might be flying under the radar?

You’ll hear a lot about Kendall Coleman and Alton Robinson on the outside of the defensive line, but keep an eye out for No. 85, Josh Black. The defensive tackle had two sacks last week and won ACC player of the week. Sticking with the defense, Ifeatu Melifonwu is an exciting young member of the Orange secondary. At 6-foot-3, he’s a long corner that plays an aggressive style of defense.

Syracuse wins the game if…

Syracuse wins if it’s defense dominates the game like Week 1 and the Orange win the turnover battle.

Maryland wins the game if…

Maryland wins if this game becomes a shootout. I’m not sure the Syracuse offense is ready for a high scoring game yet.

What week two of the NFL saw from former Terps