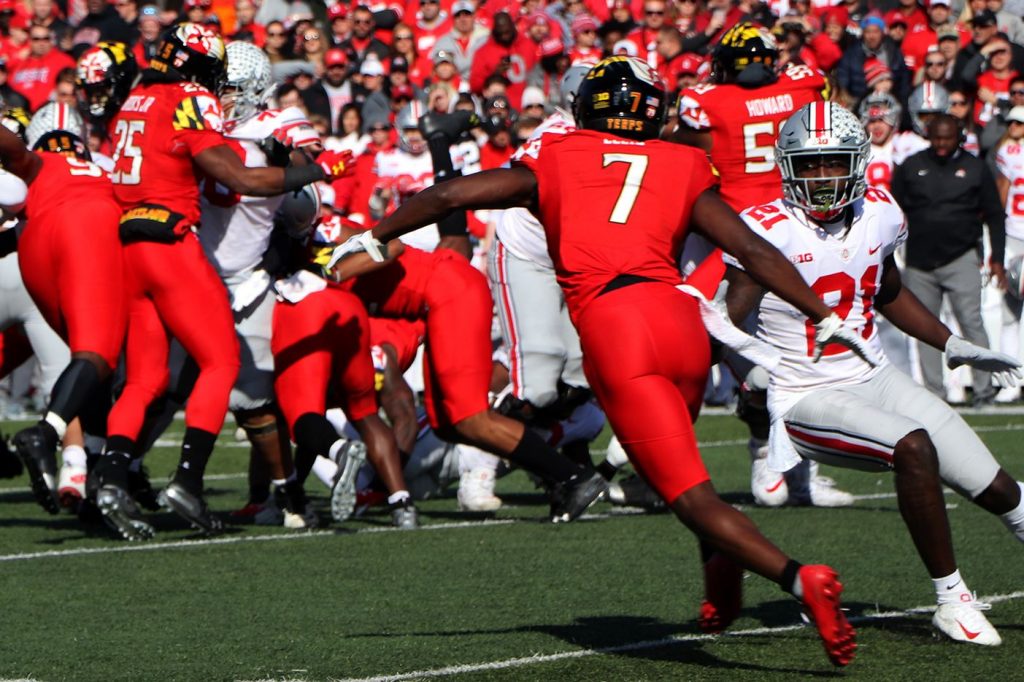 Defensive back Tino Ellis runs toward the line of scrimmage to make a tackle during Maryland’s 52-51 loss to No. 9 Ohio State at Maryland Stadium on Nov. 17, 2018. (Julia Nikhinson/The Diamondback)

With the beginning of the 2019 Maryland football season right around the corner, there are a few games on the schedule that are must-watch games for Terps fans. There might be another Texas-like upset in the mix, but for now, here are just a few of the games that Maryland fans should circle on their calendars.

The Orange went from a bottom-feeder to a 10-win team as head coach Dino Babers turned the corner after two straight four-win seasons to open his reign as Syracuse head coach. Last season was the first time since 2013 that Syracuse went to a bowl game and was their first 10-win season since 2001. The voters were high on the Orange after their statement 34-18 win over West Virginia in the Camping World Bowl, giving them a top-15 finish for the season.

Syracuse looks the most likely out of any ACC team to topple last year’s national champion, Clemson, having upset the Tigers at home two years ago and were close to upsetting them last year on the road, losing 27-23 in the final minute of the game. The Orange are for real, finishing last year with the seventh-best third-down defense, 17th best red-zone defense and the sixth-most sacks of any team in the FBS. This would be a big win for Maryland if they can pull it off.

If Maryland has a football rival in the Big Ten, it is Penn State, though the Terps have only won twice in the 42 all-time meetings. Maryland does have their night game back, and probably their blackout game too. The campus is getting shut down after 12 pm to prepare for this Friday night game and the atmosphere should be electric.

Penn State might still be figuring out their offense as they are without last years running back Miles Sanders and school-record breaking quarterback Trace McSorley, as both headed to the NFL. New players will have to step up for the Nittany Lions as Mike Locksley looks to make a signature statement in his first Big Ten game as Maryland’s full-time head coach. This might be the most intriguing matchup of the season as Penn State, while ranked, has a lot of holes that need to be patched and like the Ohio State game last year, the Terps could expose them.

Maryland is 2-3 against Indiana since joining the Big Ten, but the home team has won the last three years running. The final score has also gotten closer the last three seasons, with all three games being decided by a total of 11 points, including a narrow two-point defeat in Bloomington last year. Maryland was driving in the final minute of the game before Tyrrell Pigrome fumbled and turned the ball over, securing the win for the Hoosiers.

The matchup is back in College Park this year, so one would think that the home team would prevail once again. The two teams have been known to score a lot against each other, as both have scored 30 or more points in each of the last three games. Expect a similar result this season.

Maryland was bold this season to plan their homecoming weekend around their matchup against a top-10 Michigan team. The Wolverines are out for revenge again after falling short of expectations and getting torched in “The Game” against Ohio State, 62-39. After winning their first matchup in Ann Arbor, Maryland has been blown out in the last four meetings between the two. The closest the Terps have come to beating the Wolverines came last season on the road when Maryland lost 42-21.

The Terps are bringing back the script Terps helmet and jerseys from the mid-80s Boomer Esiason and ACC championship era, so that might bring them luck. However, they have a good chance of suffering the same fate as years past, a blowout in front of a large contingency of traveling Michigan fans.

Well, the Terps were one tw0-point conversion away from upsetting the Buckeyes at home last year, losing 52-51 in overtime. The loss still stings and has stuck with many Maryland fans, along with almost spoiling the return of former Maryland commit Dwayne Haskins. Haskins is now with the Washington Redskins, who play in the same stadium where Maryland defeated Texas for the second-straight year last September.

The Terps are looking for revenge and redemption, but they’re gonna have to find it in the Horseshoe in Columbus. There is no more Haskins and no more Urban Meyer, so maybe, just maybe, this year’s Ohio State isn’t a true top-5 team. However, the Buckeyes have seemed to replace the two well with Justin Fields and Ryan Day respectively and running back J.K. Dobbins is still around. if Maryland wants to pull off the upset and topple Ohio State for the first time ever, they need to play out of their minds for just a shot.

The Cornhuskers will be visiting College Park for the first time ever in November. Nebraska has been in a rebuilding stage the last two seasons, finishing 4-8 in each season. After a red-hot end to the 2018 season, the college football world thinks that Nebraska is back, being led by hotshot quarterback Adrian Martinez and former UCF head coach Scott Frost

That is yet to be seen as they haven’t played a game yet this season. It could all blow up in a mess of corn kernels, but don’t be surprised if the Terps put Frost on the ropes in College Park. It’s the final home game of the season and the Terps will be looking to make a statement for possible bowl eligibility or a better bowl game, depending on what happens in the first 10 games of the season.