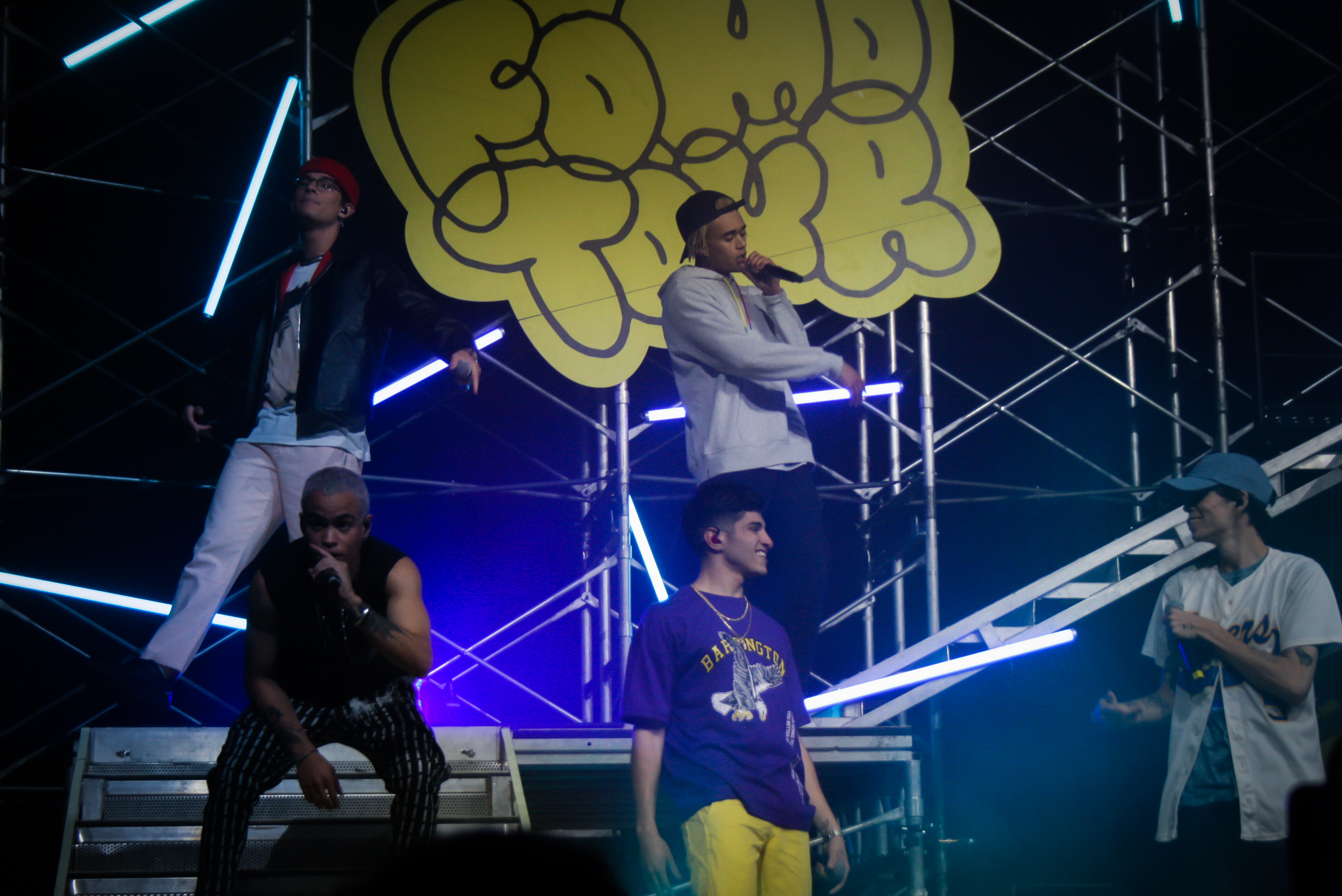 Watching PRETTYMUCH perform at DAR Constitution Hall on Friday was weird. Seeing five skater boys jump around the same stage I walked across to receive my high school diploma left me with some cognitive dissonance.

Honestly, I didn’t really know what I was getting myself into. Before Friday, I didn’t know much about the group. A couple of their songs had made it onto my playlists, but that’s it. However, as a former One Direction stan, I feel contractually obligated to give any band created by Simon Cowell a chance.

And what I learned is that PRETTYMUCH is indubitably a boy band. Brandon Arreaga, Edwin Honoret, Zion Kuwonu, Nick Mara and Austin Porter live together, sing together and dance together. That’s quintessential boy band stuff.

And on Friday, they brought that stuff to Constitution Hall.

Constitution Hall is an early twentieth-century concert hall, complete with fancy columns and a painted ceiling. It’s the birthplace of the National Symphony Orchestra. I have no idea how the streetwear-clad group ended up here, but the dutiful crowd of screaming teenagers made it make sense.

[Read more: Five concerts in the DMV to check out before the end of summer]

15-year-old singer kenzie opened, and thankfully, other people knew her well enough to sing along, even if I couldn’t. She signed off with a classic “Who’s ready for PRETTYMUCH?” and the screaming that ensued pierced my eardrums so thoroughly that it threw off my balance and I almost tumbled over the barrier into the heaving crowd below me. More quintessential boy band stuff.

The group came out to their new single, “Lying,” originally featuring Lil Tjay, which dropped the day off the concert. They quickly segued into “4U,” off their newest EP, and then the unreleased “Rock Wichu.”

Most songs were true to the studio versions, but they switched up the beat of a couple of songs for the express purpose of a synchronized dance break. It was very “Bye Bye Bye,” if *NSYNC had known how to hit the woah.

For “Gone 2 Long,” the five of them sat on stools, accompanied only by a launchboard, encouraging everyone to wave their phone lights. Very touching stuff. But near the end of the song, the launchboard malfunctioned, and they decided to perform the rest of the track acapella. I have no idea if that was actually a game-time decision or a charming ploy, but it was endearing either way.

It’s that charm, combined with their palpable chemistry, that is the most boy band thing about them. Their camaraderie was clear throughout the night, from complicated handshakes to casual conversations in between songs to their kinda-cliche-kinda-cute proclamation that they’re “brothers.”

[Read more: You’ve heard of hot girl summer — but have you heard about the girl who started it?]

The rest of their persona is less clear-cut, always walking the boy band line. They may sing about grinding in the club, but they also skip the word “fuck” in their own lyrics. They’ve got elaborate dance sequences, and yet there’s something in their milly rocking that lets you know they actually love dancing. They get hit by bras thrown onstage, but their emphasis is on their squad.

And notably, they’re the only boy band I’ve ever seen pull off rapping. In their performance of “Solita,” originally featuring Rich The Kid, Austin took over the rap and did well enough that I barely missed Rich. And in their performance of “Phases,” Zion rapped the line “we both realized that he was bogus” with such conviction that I can’t help but be certain that whoever “he” is, he’s bogus.

“Phases” was the last song of their normal set, and it’s usually the kind of song that makes you want to lie on the quad at 1 a.m. and contemplate your life choices. But their closing performance was much more hype than expected and left the audience wanting more — which, of course, they gave us.

They came back out for their encore with “Open Arms,” an early single that features some pretty impressive harmonies. But those obviously weren’t the focus of the last song. Instead, they took the opportunity to flex their dancing skills one last time.

I went into this concert sure I had outgrown my love for boy bands. I thought I would remain unfazed by their boyish charm, unaffected by their carefully curated brand. But then Nick waved at me, and I felt myself slip right back into old habits.

Criticism of ‘Drag Race All Stars 6’ cast highlights racism, exclusivity of fan base