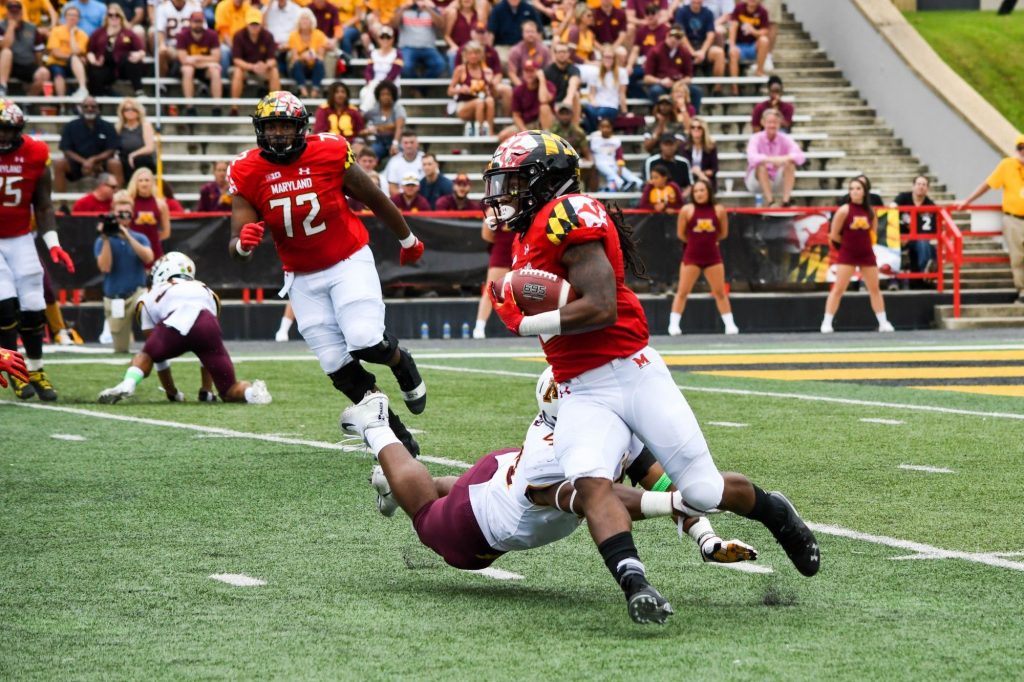 Running back Anthony McFarland runs through a tackle during Maryland football’s 42-13 win over Minnesota at Maryland Stadium on Sept. 22, 2018. (Alex Chen/The Diamondback)

Caesars Entertainment released their 2019 college football over/under win totals for the Big Ten, projecting Maryland at 3.5 wins, with only Rutgers being lower at 2.5 wins. FanDuel is also not high on Maryland, projecting just 4.5 wins for the 2019 season.

Which is more likely for the Terps come late August? If you are a betting man, it seems you should take the over for 3.5, but 4.5 might seem more realistic. Here’s why.

Howard might be the only surefire win of the season as Maryland not only destroyed them in 2016, but the Bison also limped to a 4-6 record in FCS play in 2018. Due to Maryland losing at Rutgers in 2017, that game is not a definite win, but the Terps have had their number in most sports, including football. Last year, Maryland beat Rutgers 34-7 in a game where the Scarlet Knights’ quarterbacks threw more interceptions than completed passes. Maryland has won their past two meetings against Minnesota, including the 42-13 win in College Park last year, so history sides with the Terps.

The Terps are 2-3 against Indiana since joining the Big Ten, going 1-2 in the past two years with the teams trading off home wins. The setting moves back to College Park in 2019, so recent history sides with Maryland despite the Hoosiers narrowly beating the Terps last year. With Temple, history says Maryland should win, having a 7-2 all-time record against Temple, but the Owls did beat Maryland 35-14 last season. The last time they played a home-and-home series against Temple, Maryland lost in College Park, but won in Philadelphia, so who knows?

With both of these teams, you do not know what team you are going to get in 2019. The last time Maryland played Purdue they beat them 50-7 three years ago. Since then, Purdue has gone to two straight bowl games and stomped No. 2 Ohio State last year. For those who do not know, that Ohio State game had significantly more meaning with the late Tyler Trent in attendance, but this year’s matchup could go either way.

Syracuse had what could be considered a fluke season in 2018, winning 10 games for the first time since 2001, while finishing the season ranked 15th in the nation. They have had 10 losing seasons in the last 14 years, but since 2010, the Orange have been to four bowl games. Maryland has an overall 15-19-2 record against the Orange, so who really knows what will happen with this game.

And of course, we reach the four horsemen and the Cornhuskers. Maryland has a combined 7-60-1 record against these five teams, not winning more than two games against any of the five. Penn State, Ohio State and Michigan State are all projected to be slightly worse in 2019, but worse is still better than Maryland. Michigan is projected to be better and 2019 and are still significantly better than the Terps. Nebraska went 4-8 last season, but they are slated to be much better in 2019, and with second-year head coach Scott Frost at the helm, they have been receiving a lot of praise as a potential break out team this season.

Overall, every year is becoming a toss-up for the Terps, but it looks that FanDuel might have the upper hand here. Things could still change, as the Terps season opener against Howard is still over 50 days away.