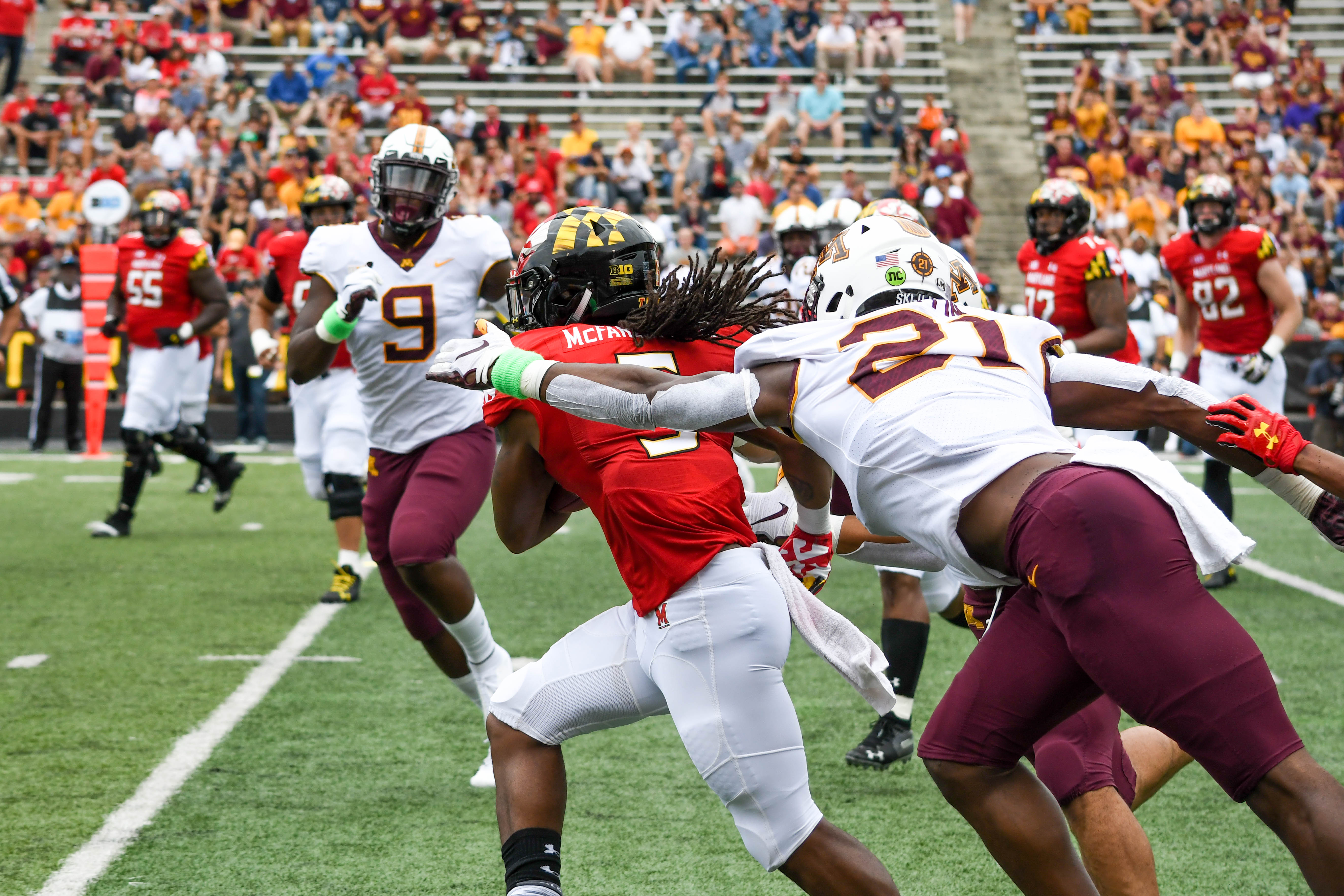 After handing off to Anthony McFarland, Maryland football quarterback Kasim Hill ran with both of his arms raised, struggling to keep up as the running back sprinted toward the endzone for a second time Saturday.

McFarland found a seam in the defense and hit the gap at full speed, leaving Minnesota defenders and Terps teammates alike further and further behind as he broke away for the 64-yard score, his second touchdown of Maryland’s Big Ten opener.

Maryland had been waiting for this production from the former four-star recruit who broke his fibula before his senior year of high school and redshirted last season. Now back on the field, McFarland’s explosiveness was on display against the Gophers as he rushed for his first two college touchdowns.

Despite an offensive line that remains unstable, Maryland rebounded from its abysmal offensive showing from the week prior to drop Minnesota, 42-13, and open conference play with a blowout win.

“Especially coming off of last week as an offense, we were focused on starting fast and really just going out and playing and having fun,” Hill said. “It was great to see Ant get in the endzone.”

Last week, starting tackles Damian Prince and Derwin Gray sat out with an injury, and while interim head coach Matt Canada said that had “no bearing” on the 35-14 loss to Temple, it was the logical explanation for the dropoff from 444 rushing yards gained against Bowling Green to 195 total against the Owls.

Prince remained unavailable to the Terps (3-1, 1-0 Big Ten) on Saturday while Terrance Davis started his first game of the year. Marcus Minor also missed snaps due to injury. Still, the patchwork line created holes like the one McFarland found on Maryland’s opening possession for a 26-yard touchdown.

McFarland’s broken leg in August 2016 ended his senior season before it began. But now, with Lorenzo Harrison and Jake Funk out with injuries, McFarland is shouldering a significant role in the Terps’ ground game and making a case to remain a significant part of the offense.

“We’re banged up,” Canada said. “We played with great focus. If you want to talk about this football team, their ability to keep themselves focused on things is really, really important.”

Later in the first quarter, running back Ty Johnson broke off an 81-yard carry to establish a two-score lead.

And after failing to record a sack last week, Maryland’s defense got to walk-on freshman quarterback Zack Annexstad early and often Saturday. Annexstad was sacked four times, looked gimpy as he tried to move around the pocket and was pressured into throwing a pick-six to linebacker Tre Watson on the second play of the third quarter.

Annexstad found wideout Rashod Bateman for a 17-yard score in the second quarter to pull within 11 points at halftime. But the defense held Annexstad to 169 yards, picked him off twice and allowed him to complete 14 of his 32 passes.

“Guys just flew around and played with a lot of energy,” Watson said. “We have dudes on this defense who can fly around and make plays at any moment.”

Minnesota (3-1, 0-1) entered with the No. 6 ranked defense in the country, but the Terps scored more points Saturday than the Golden Gophers’ first three opponents combined.

Hill, who threw for 56 yards in Maryland’s ugly home opener, completed 10 of his 14 passes Saturday, including a 54-yard touchdown to wide receiver DJ Turner in the second quarter. But the Terps hardly needed to drop back for passes late, instead handing the ball off to pick up yards in chunks en route to 432 total yards and a Big Ten-opening victory.

“You have to decide how you want to stop us,” Hill said. “However we get a flow, get a rhythm, however that’s working for us that day, all of us just want to win, whether it’s running the ball, throwing the ball, whatever we have to do.”

The buildup to the game was largely overshadowed by Friday’s release of Rod Walters’ investigation into offensive lineman Jordan McNair’s death, which highlighted the missteps made by Maryland’s athletic training staff. As they have been all season, the reminders of the May 29 workout remained with the Terps, with McNair’s No. 79 sprinkled throughout Maryland Stadium.

But Maryland jumped out on Minnesota early, gambling on a fourth down on the opening drive and converting. When Canada was asked during his postgame press conference about the resiliency of his players, who have weathered coaching changes and departmental turmoil, Canada cut the reporter off.

“It’s unbelievable!” he yelled into the mic. “These kids are special.”