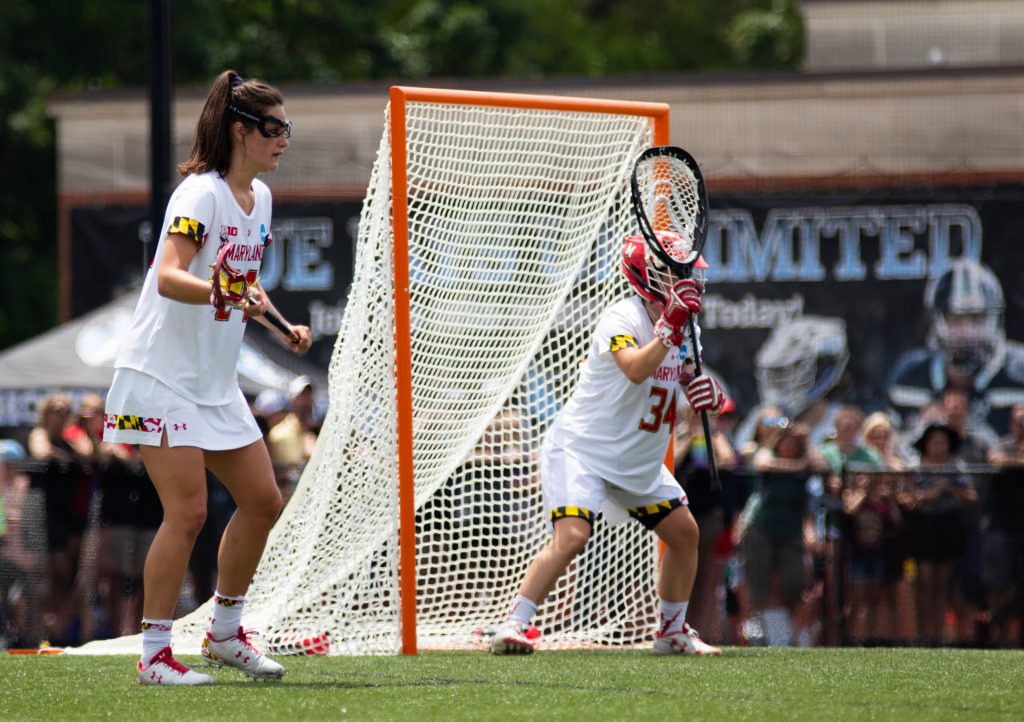 Goalkeeper Megan Taylor gets in position to save a shot in Maryland women's lacrosse's 12-10 over Boston College on May 26, 2019 in the NCAA championship. (Julia Nikhinson/The Diamondback)

Taylor’s selection comes as no surprise. The four-year starter concluded her senior campaign by becoming the first goalie in women’s lacrosse history to win the Tewaaraton Award. After a midseason slump, the Glenelg native rebounded in a big way, notching 24 saves in the season’s final weekend, carrying the Terps to their 14th NCAA championship. It’s her third consecutive All-American acknowledgement.

Giles was no small part of Maryland’s national championship glory, as she led the Terps with 59 goals and ranked second with 23 assists. She also proved to be a leader of a senior-heavy roster, guiding the team through an undefeated regular season. Her efforts earned her a second consecutive first team acknowledgement.

Hartshorn was crucial for Maryland both in the draw circle and on the offensive end. The junior topped 130 draw controls for the second consecutive season, snagging 137 in tandem with Colson. She also improved on last season’s scoring total, notching 48 goals, while setting a career-high in assists.

Evans started slowly as a graduate transfer, coming off an ACL tear that sidelined her for 18 months. However, she brought an extra kick of pace and creativity to Maryland’s already dominant midfield. In her lone season as a Terp, Evans tallied 59 goals on 57 percent shooting.

Steele struggled through some midseason injury struggles, but once again established herself as one of Maryland’s most important big-game players. She scored an overtime winner against North Carolina in mid-February — despite nursing an ankle injury — to keep Maryland’s undefeated season alive. The senior also picked the right moment to have a career night, as she scored seven goals against a fearsome Denver defense in the NCAA quarterfinal.

Five of Maryland’s seven All-Americans departed following the 2019 campaign. Thus, coach Cathy Reese will be looking to Hartshorn, Colson, and a wave of new talent to bring Maryland back to lacrosse’s biggest stage. But Maryland has weathered the loss of talent in the past, and have still made 11 straight Final Fours.