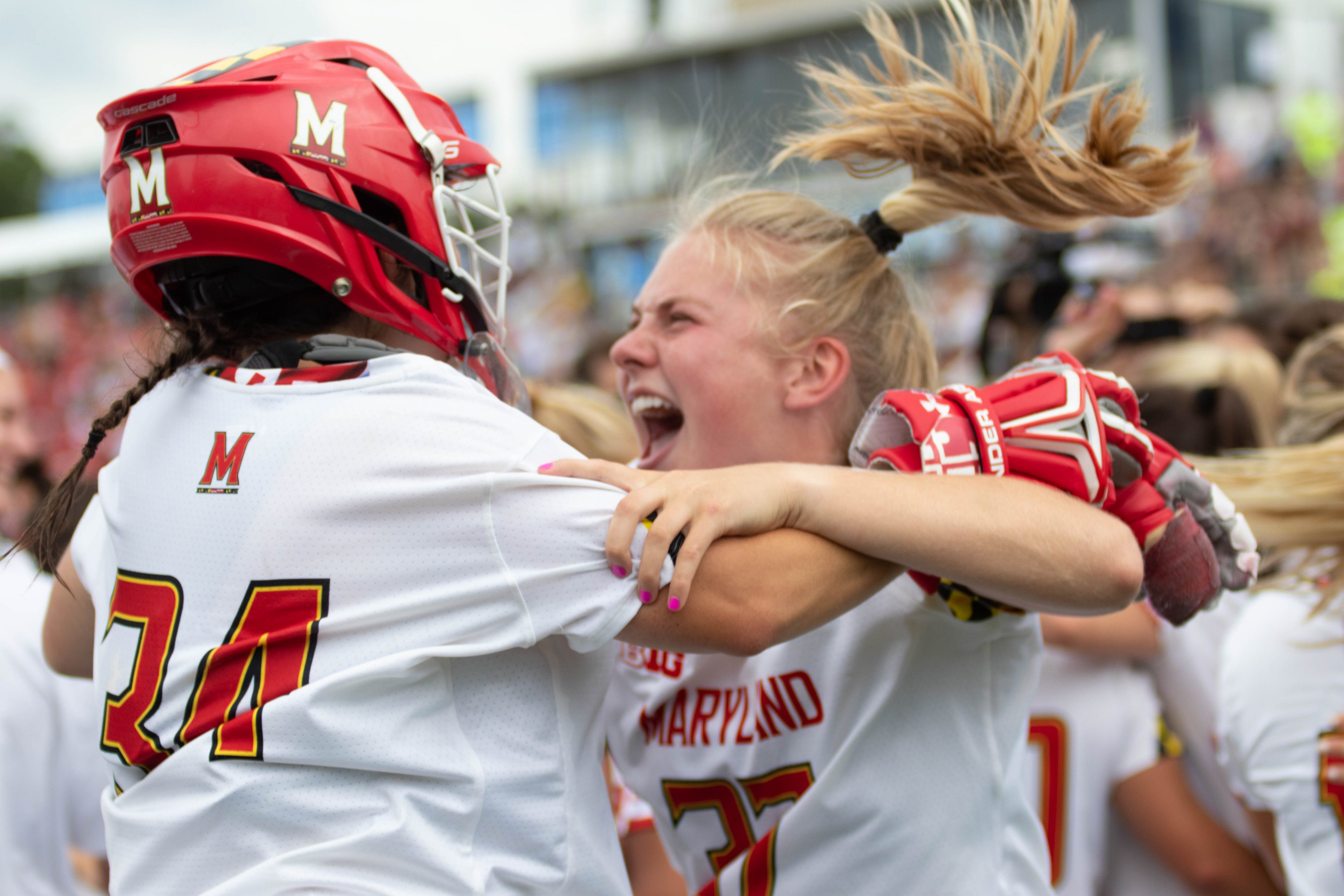 As screams of jubilation echoed around a packed Homewood Field, the Maryland women’s lacrosse team was overcome with emotion — laughter, hugs and a few tears.

The Terps had just won their 14th NCAA title. For their stacked senior class, it was a storybook ending to a dominant four years where the group went through both the heartbreak of losing a title and the triumph of taking home two.

Among the noise and commotion, one senior’s voice stuck out. Defender Julia Braig excitedly jumped — her championship hat almost falling off — and threw her arms in the air, raising her head to the sky.

Her declaration was met with a cacophony of further cheers. And as the festivities continued, the senior-heavy Terps were in no hurry to leave the field on which they had achieved glory, many for the last time in a Maryland jersey.

The national championship was the culmination of a season of near-perfection. But while the Terps were consistently one of the top two teams in the nation — and often crushed their regular season opponents — there were always minor faults that suggested they might not be good enough in an all-or-nothing encounter against the NCAA’s best.

Yet on championship weekend, Maryland delivered its best two performances of the season, channeling its regular season dominance into an assertive showing as the rightful national champions.

Although the Terps strolled through an undefeated regular season, there were always areas of concern. Whether it was carelessness with the ball, bad shot selection or slow starts, Maryland looked frighteningly vulnerable at times. Still, the team pulled everything together when the stakes were highest and never looked troubled in the final two games of the season.

The Terps’ campaign began on a frigid February morning with a 16-5 dismantling of George Mason. They followed that by beating a dangerous Florida team, 17-12, in Gainesville. While Maryland poured it on against the Patriots and the then-No. 4 Gators, its offense still lacked efficiency.

“We forced the ball a few too many times,” Reese said before the Florida game. “We gotta shoot better.”

Those difficulties were further exposed against then-No. 2 North Carolina. In their first matchup against a truly elite program, the Terps staggered through a 14-minute scoring drought in the second half as they watched their 11-7 lead vanish. It took overtime heroism from injured attacker Caroline Steele to save the home team, 13-12.

“Playing UNC year in and year out, it’s always such a hard-fought battle,” Steele said. “To be able to come out on top this year was awesome.”

The win was the first of several in which the Terps prevailed despite not playing to their full potential — a theme that would develop throughout the season.

An 18-1 drubbing of UMBC followed, with Maryland dominating all facets of the game. It appeared to signal the end of the Terps’ inefficiency woes. They shot 51 percent — a season best — and topped that their next game, shooting 53 percent against Hofstra and then 60 percent against Penn two games later.

As one problem disappeared, though, another came up. This time, it was turnovers. Maryland held onto the ball with aplomb for its first four games of the season — a mere 11 turnovers against Florida was its worst effort. But the Terps started to struggle.

They tallied 13 or more giveaways in each of the next four contests. Such carelessness nearly ended their undefeated regular season early. Syracuse — coincidentally the last team to beat Maryland at home, in 2012 — had a shot to mar Maryland’s 5-0 start to the season. However, a well-executed free-position in overtime, finished by attacker Kali Hartshorn, kept the Terps’ undefeated season alive.

“I thought, ‘If I have one, better make it count,’” Hartshorn said after her dramatic winner.

As the turnover issues waned, the slow starts began. The first inklings of worry were against Michigan on April 6. With Maryland celebrating Senior Day, the Wolverines came out ready to ruin the party. They faceguarded midfielder Jen Giles, daring Steele — playing with a bad ankle — to run the offense. And for the first 12 minutes, it looked like Michigan had the game plan necessary to shock the Terps, nurturing a 1-0 lead.

But Maryland was handed a lifeline when defender Madison Richardson, responsible for manning Giles, limped off with a sprained ankle. The Terps soon found a foothold and breezed by the only other undefeated team in the Big Ten.

The rusty openings to games perpetuated over the course of the next few weeks. Maryland fell into an early 3-0 hole against Northwestern in Evanston, Illinois, and seemed headed for a loss in inclement weather. After numerous delays and a change in venue, the Terps grinded out a 17-13 win.

“There are some things we need to look at and figure out as we move forward,” Reese admitted after the scare against Northwestern.

But Maryland didn’t figure things out immediately. It experienced further difficulties against Johns Hopkins, Georgetown and Penn State. While all three resulted in wins, the team’s playstyle wasn’t sustainable — and it showed in the Big Ten tournament championship. Northwestern jumped out to a 2-0 lead and never looked back. Maryland was left bewildered as the Wildcats denied them fourth consecutive Big Ten tournament trophy.

“We had a few lapses that they just capitalized on,” defender Lizzie Colson said after the loss. “They were taking advantage of our mistakes.”

The slow start issue became such a problem that opposing coaches began to single it out as Maryland’s biggest weakness. And for five minutes of its opening NCAA tournament matchup against Stony Brook, it figured to be the death of Maryland’s season.

“I said to my wife this morning, ‘We need to make them remember the Northwestern game,’” Stony Brook coach Joe Spallina said.

After Reese’s squad conceded four tallies in the first six minutes, the coach called a timeout and laid into her players. Her words appeared to make a difference, as Maryland clawed its way back into the game and into the quarterfinals.

Only then, 20 games into the season, did Maryland truly hit its stride. The Terps were completely electric for the last three contests of the year. They made quick work of Denver and Northwestern, setting up a date with Boston College in the national championship game.

After dejectedly walking off the field while Boston College celebrated a semifinal win over Maryland last year, the Terps made sure that they were the ones cheering this time.

Maryland was able to change the narrative of its season thanks to the end result. Its 2019 campaign won’t be defined by slow starts and turnovers, or a Big Ten tournament loss. It won’t be remembered for the imperfections or inefficiencies. Instead, it will be remembered as one where Maryland overcome those obstacles, tweaked its game and won a national championship — again.