Megan Taylor carried Maryland women’s lacrosse back to the top 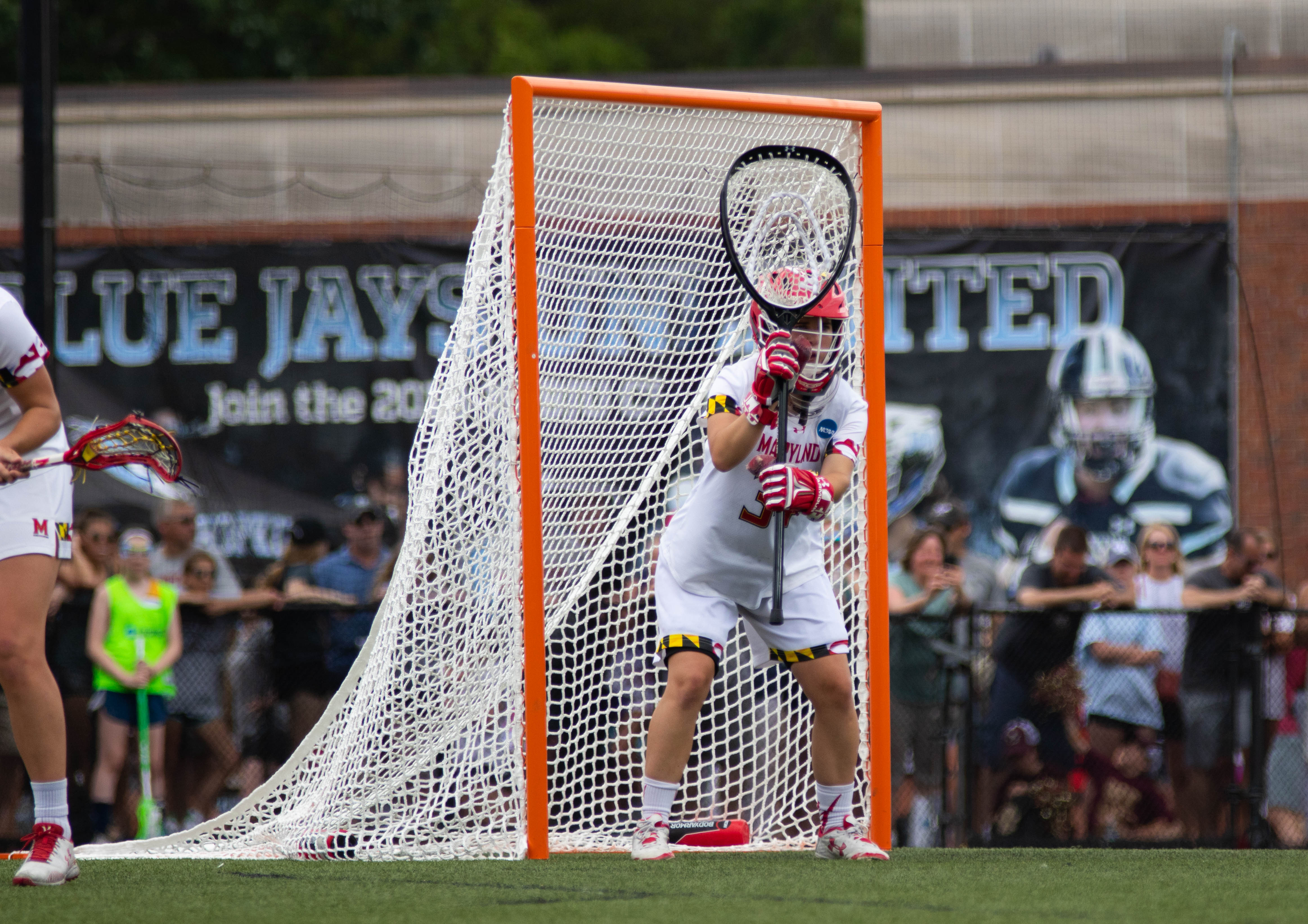 Goalkeeper Megan Taylor gets in position to save a shot in Maryland women's lacrosse's 12-10 win over Boston College on May 26, 2019 in the NCAA championship. (Julia Nikhinson/The Diamondback)

Of the many qualities a national championship team possesses, three are almost always at the forefront: talent, grit and “the clutch gene” — the mental fortitude to perform well under pressure.

This year’s Maryland women’s lacrosse squad has shown all three. But in Sunday’s national championship, a fourth factor was on display — one that carried the Terps past the only other team in the nation to have matched their resume.

It was leadership. And goalkeeper Megan Taylor was the epitome of it.

While the Maryland defense performed at the highest level it has all season, Taylor was the ultimate difference maker. Facing some of the best shooters in the country, she held Boston College to its lowest goal total of the season to close out Maryland’s 14th NCAA championship.

“Just knowing she’s in there and is going to make some incredible saves,” attacker Caroline Steele said, “makes every one of us better.”

After starting the season red hot, Taylor hit a wall in the Big Ten tournament with a season-low 35 percent save rate in the Terps’ loss to Northwestern in the conference championship.

However, in the NCAA tournament, she returned to the form that has earned her four consecutive Big Ten goaltender of the year honors. And against the Eagles on Sunday, she produced one of her best performances of the year, holding the nation’s fourth best offense to 31 percent shooting.

Despite Maryland storming to an early lead, it wasn’t due to a lack of effort from Boston College, which applied pressure on offense from the onset. Taylor was hardly fazed, though, equaling most of the Eagles’ attempts. Just over two minutes into the game attacker Sheila Rietano’s shot was deflected by Taylor off the pipe.

And just over five minutes into the game, attacker Kenzie Kent experienced a similar fate, as she looked sure to score inches from the edge of the crease, but Taylor stuffed her.

“[Taylor] was fantastic, and made some unbelievable saves to anchor our defense,” coach Cathy Reese said.

Taylor continued to hold her ground for the rest of the first half, totaling seven saves from 11 shots on net, among her best halves of the season. And, crucially, when she did let in goals, she showed no signs of frustration — it was on to the next play.

The rest of the team rallied around her energy. Such was the case when Taylor deflected a shot from midfielder Cara Urbank. The Terps dove on the loose ball and started an attack. Twenty three seconds later, midfielder Grace Griffin found the net for a 4-2 lead.

Shortly after, Boston College attacker Sam Apuzzo — the 2018 Tewaaraton Award winner and a finalist this year — was afforded a free-position chance. The nation’s leading scorer rocketed a shot, but Taylor made the challenging situation look all too simple and stymied Apuzzo’s attempt.

The Eagles started the second half with a renewed energy. They notched the first goal of the period, and limited the Terps on offense. But Taylor made sure the potential comeback was merely a pipe dream.

Never was that more evident than in the last 10 minutes as Maryland’s vibrant offense started to fade. To compound matters, the dangerous Apuzzo found gaps in the defense and room to operate. For a moment, it looked like Maryland’s 12-8 advantage with seven minutes remaining could have been erased with ease.

“There’s a couple timeouts there where I had to bring everybody in,” Reese said. “Because the energy is raging.”

But Taylor provided two saves in two minutes to prevent a dramatic late rally — and the Terps held out from there. Defender Lizzie Colson snagged a vital draw control, and attacker Brindi Griffin held onto the ball, evading three defenders to burn vital shot clock time.

Down the stretch, chants of “Me-gan Tay-lor” began. The senior leader kept barking orders at her defense, and when the whistle blew, the entire roster sprinted to her. Taylor looked flustered for a few seconds. Only after the initial pandemonium did she celebrate — and she didn’t look ready to stop.