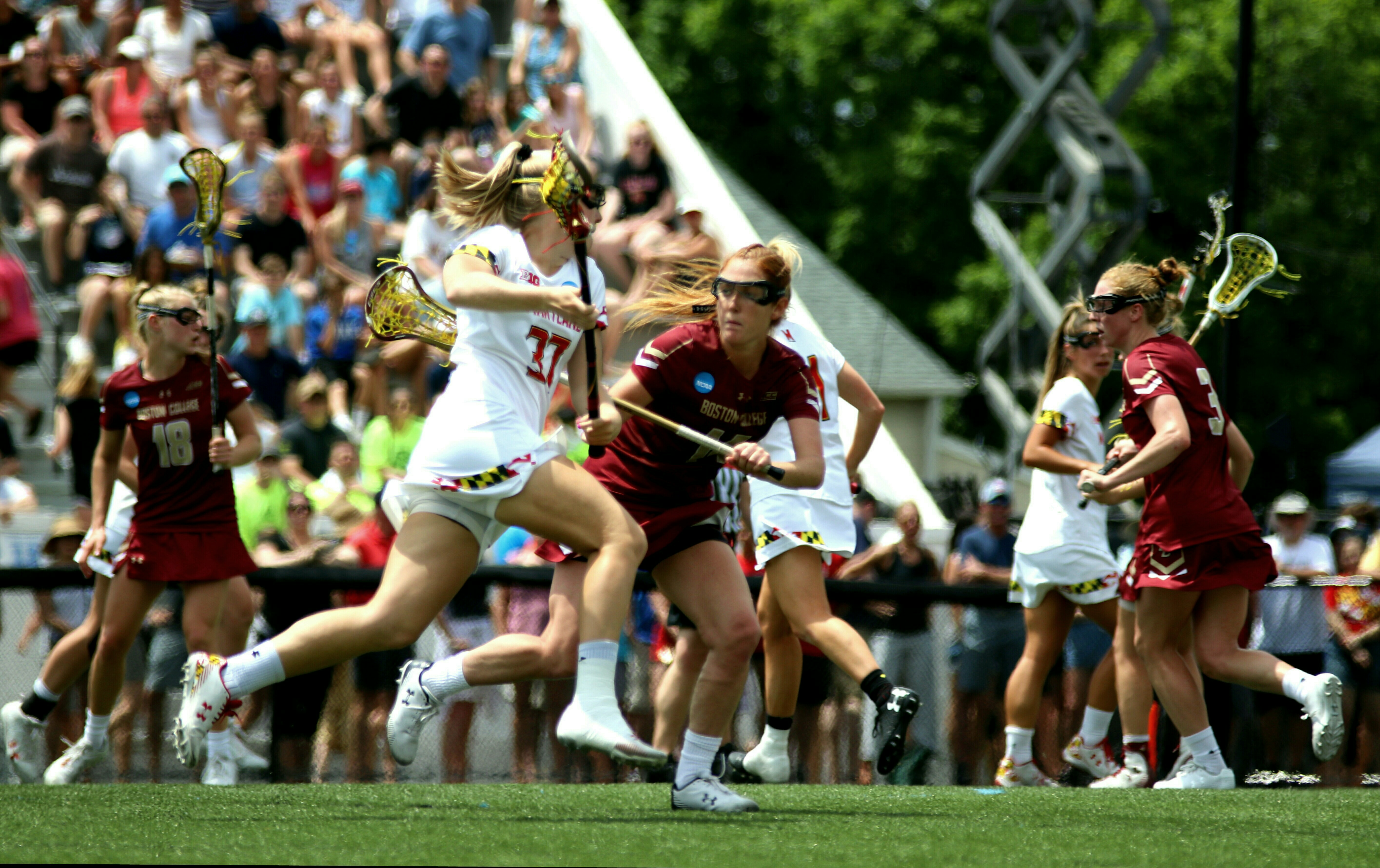 BALTIMORE — Jen Giles tumbled to the turf, her goggles flying off, her hands clenched as she let out a roar. The Maryland women’s lacrosse midfielder, who had been held quiet for the first half Sunday, finally made herself heard loud and clear at Homewood Field in Baltimore.

The senior Tewaaraton Award finalist had drawn two defenders on her drive to the goal, spun to the left and fired a side-arm shot past goalkeeper Lauren Daly for her second score in the final 15 minutes of the national championship.

As time wound down in the title game, Giles’ strike re-established a four-goal edge for the Terps over Boston College. Maryland — two days after posting its best offensive performance in the last 15 years — was held to its lowest scoring output in the NCAA tournament thus far.

But with goalkeeper Megan Taylor between the pipes, the Terps held the Eagles to their lowest goal tally this year, prompting a charge toward the senior shot-stopper as the horn sounded on a 12-10 win and the program’s 14th national title.

“It’s a great day to be a Terp,” coach Cathy Reese said. “I couldn’t be more proud of this team.”

Giles’ score gave Maryland a much-needed cushion to weather Boston College’s late push, with two scores from attacker Kenzie Kent in a 25-second span to draw her team within two goals. But the Terps held on, due in large part to early dominance.

Maryland quickly hit on the fast break out of the gate. After forcing a turnover off a free position look, midfielder Erica Evans broke through the Eagles’ midfield, bearing down on goal. Rather than shoot, she flipped a pass to attacker Caroline Steele, who wound up and rippled the back of the net for a 1-0 Maryland lead.

“Something we really wanted from the beginning was to come out firing,” Giles said. “Just really having our foot on the pedal.”

Steele’s efforts were complemented by suffocating defense at the onset. With Boston College trying to zip the ball around, Terps defenders provided little room for their opposition to maneuver. Such a strategy was effective for the first few minutes. But the Eagles soon showed their offensive quality, scoring twice in 30 seconds to take a 2-1 edge.

Steele responded with her second of the day, firing low to tie the game at two. Attacker Kali Hartshorn barreled her way inside and scored to tip the game back into Maryland’s favor with 19:20 remaining. Midfielder Grace Griffin added another, putting Maryland up 4-2.

And the Maryland defense held its own. The Terps kept attacker Sam Apuzzo, the nation’s leading scorer, away from the ball, daring the rest of the Eagles to attack one-on-one. And on the rare occasion Apuzzo was afforded an opportunity, Maryland was quick to apply pressure and force her into a rushed shot or pass.

“My defense today played out of their minds,” Taylor said. “We were so prepared … and just ready to execute.”

But Boston College started to claw its way back into the game. While the Terps dominated early, the Eagles began to find some holes in the stifling Maryland defense. Even so, the few shots and numerous hard fouls kept both teams from finding the net with regularity, and the Terps held a 6-3 advantage with 9:24 remaining in the first half.

After putting away a career-high six goals Friday against Northwestern, attacker Brindi Griffin added her second strike Sunday to extend the lead to 7-3 with about five minutes remaining before intermission. She tacked on another less than two minutes later to open up a commanding 8-3 advantage and complete a hat trick.

“Attacking was our mentality all over the field,” Giles said. “That really helped us.”

Although Boston College pulled one back before the break, the Terps were riding high on the back of Taylor’s magic. After conceding eight in the first half the last time the two squads met — a Boston College win in the 2018 NCAA semifinal — Taylor was almost impervious on Sunday. The senior tallied seven first-half saves, holding the Eagles to 25 percent shooting.

With momentum slipping away from Boston College, a quick strike to open the final 30 minutes seemed imperative. And the Eagles delivered. Attacker Kenzie Kent and Apuzzo executed a quick give-and-go, pulling one back for the Eagles and silencing the Maryland faithful. Hartshorn had a response, though, firing a shot past Daly and slamming her stick into the turf.

Despite yielding nine goals, Daly kept Maryland at bay for a crucial eight-minute stretch. She blocked shots from Steele, Giles and Brindi Griffin to hold the score at 9-5.

But she was helpless to stop Maryland’s next effort. Grace Griffin barreled to her left, held off a defender and blasted a shot in for a 10-5 advantage.

Then, the Eagles started to show why they laid claim to the top spot in the rankings for most of the season. They went on a 3-1 run to trim Maryland’s lead to three with 11 minutes to play. Despite the tense nature of the game, Maryland’s defensive unit remained poised.

An offensive foul from midfielder Cara Urbank and an ensuing yellow card swung things back in Maryland’s favor. Giles gave the Terps more reasons to cheer, dodging two and scoring while falling to the ground with a sublime solo effort that augmented the lead to four with 7:18 remaining.

And the Terps were able to hang on. Although Boston College scored twice in the final five minutes to make it 12-10, Maryland regained the ball with just minutes separating them from a national championship win.

When it finished, triggering celebrations at the end of a one-loss season that sees Reese’s team atop the country once again, the decorated coach’s players ran to the stands. They celebrated with players of years past — the ones who had laid the groundwork of a dynasty this current crop continued.

“When it all ends it’s a little surreal,” Reese said. “We just did that, we just won a national championship.”