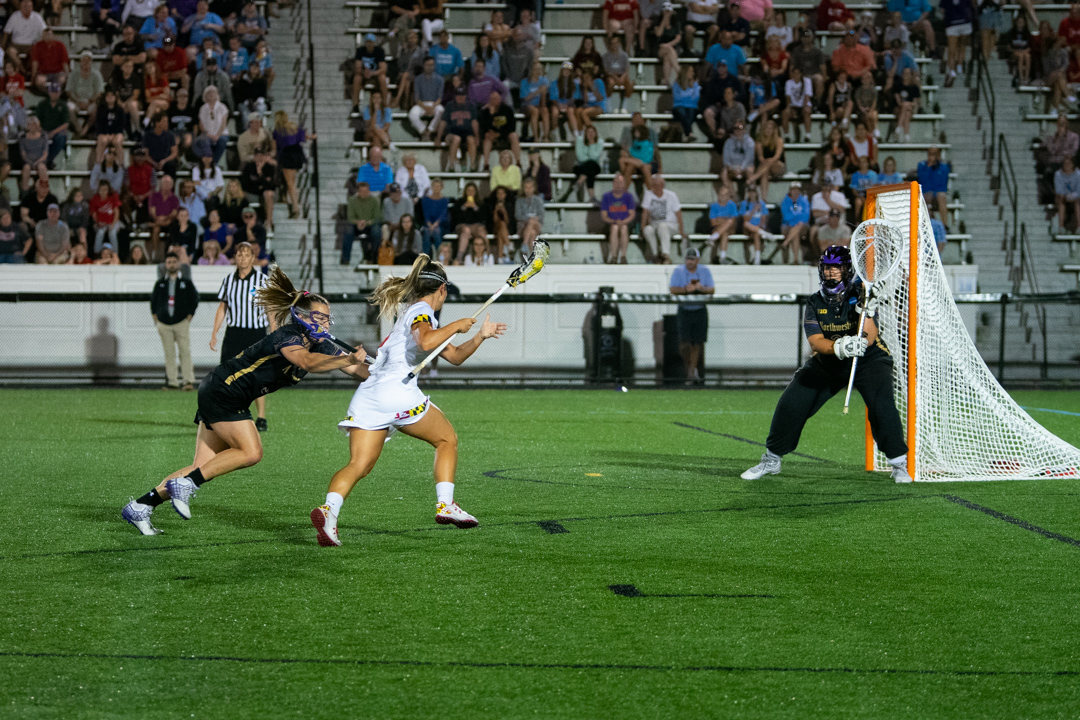 BALTIMORE — With two high-octane offenses on display, Maryland women’s lacrosse’s contest against Northwestern projected to be a fiery shootout. And with the season series split at 1-1, the NCAA semifinal bout seemed destined to come down to the wire.

But the Terps dispelled those premonitions with 11 minutes remaining. Midfielder Grace Griffin lined up a free position, went hard to goal and finished low. Coach Cathy Reese pumped her fist. Most of the 8,508 fans in attendance seemed to join in celebration.

Griffin’s strike put the Terps up 23-13, initiating a running clock that ticked away the minutes remaining until Maryland’s national championship appearance was secured.

While Northwestern slowed its offensive production in the second half, Maryland continued to pile on the goals. And while the Wildcats finished their open shots early, the Terps were far more consistent. Maryland’s ruthless offensive output carried it to a 25-13 revenge win Friday night and a national championship meeting with Boston College on Sunday.

“To have come off a Big Ten championship [loss] to Northwestern,” coach Cathy Reese said. “To make the changes that we did … come out tonight and have our foot on the gas the entire time is something i’m really proud of.”

Attacker Caroline Steele got the Terps going early. She countered a recent trend of slow starts in dramatic style, going alone to goal and slinging a shot past goalkeeper Mallory Weisse.

And Maryland didn’t relent, as strikes from Attacker Catie May and midfielder Grace Griffin put the Terps up 3-0.

But Northwestern had a response. The last time the two sides met, attacker Izzy Scane torched the Terps with four goals in the first half. She went to work early again, notching two goals in less than a minute to pull Northwestern back to 3-2.

A solo effort from midfielder Jen Giles exorcised her Homewood Field demons. The senior hadn’t scored in two games at Homewood this season prior to Friday’s game, but quickly remedied that by faking past her defender and drilling one in.

Yet, the back-and-forth nature of the first half continued. Scane and attacker Selena Lasota leveled the game, scoring twice in quick succession to tie the contest at four.

The trend continued for most of the half until a crucial strike from midfielder Hannah Warther. After a forced turnover, the Terps moved in transition. Although they missed the first shot, Warther made no mistake on the second, rounding her defender and beating Weisse with power. Her 11th goal of the season opened a 10-6 Maryland lead.

Midfielder Erica Evans followed it up with a goal of her own, extending the Maryland advantage to five. Although Northwestern pulled one back, Maryland entered the break with an 11-7 lead.

Despite the advantage, Maryland had appeared sloppy at times. Lackadaisical passes and two failed clear attempts accentuated Maryland’s lack of flow. But with five forced turnovers, the Terps held onto the lead.

The offensive showcase continued in the second half, and Northwestern crept within two. But the Terps began to pull away.

A crucial pair of goals from Brindi Griffin — who finished with a career-high six tallies — gave Maryland more breathing room. After a timeout at the 20-minute mark, the Terps led 16-12, and seemed well-positioned to close out the game.

And they did just that. After getting dominated on the draw in their Big Ten championship loss to the Wildcats — and splitting the contests somewhat evenly through the first 40 minutes of Friday’s game — the Terps locked in at the circle. Ten of the first 15 draw controls went the Maryland’s way, contributing to a 21-13 lead with 13 minutes remaining.

By the end of the game, nine Terps had found the scoresheet, with three contributing hat tricks.

“It was so exciting, so awesome,” Brindi Griffin said. “We had so many goalscorers, and it was just such an exciting environment to be a part of.”

Griffin’s strike with 11:00 remaining delivered the death blow. In the remaining exchanges, the Terps exercised complete control of the contest. With five minutes to go, Reese removed her starters to give new faces some looks in NCAA tournament play.

Few would have expected almost the Maryland starting lineup to be celebrating from the bench, but the Terps had the luxury of watching their substitutes take over. All three Maryland captains beamed from the sidelines as the bench closed out the game. When the final horn blew, the Terps ran to freshman goalkeeper Maddie McSally — the usual center of attention, senior Megan Taylor, was on the bench.

But it didn’t matter. The Terps celebrated the win that propelled them to a national championship appearance, as the stacked senior class gets one last shot at lacrosse glory.

“We’re all really excited to have one more opportunity to play with each other,” Taylor said.