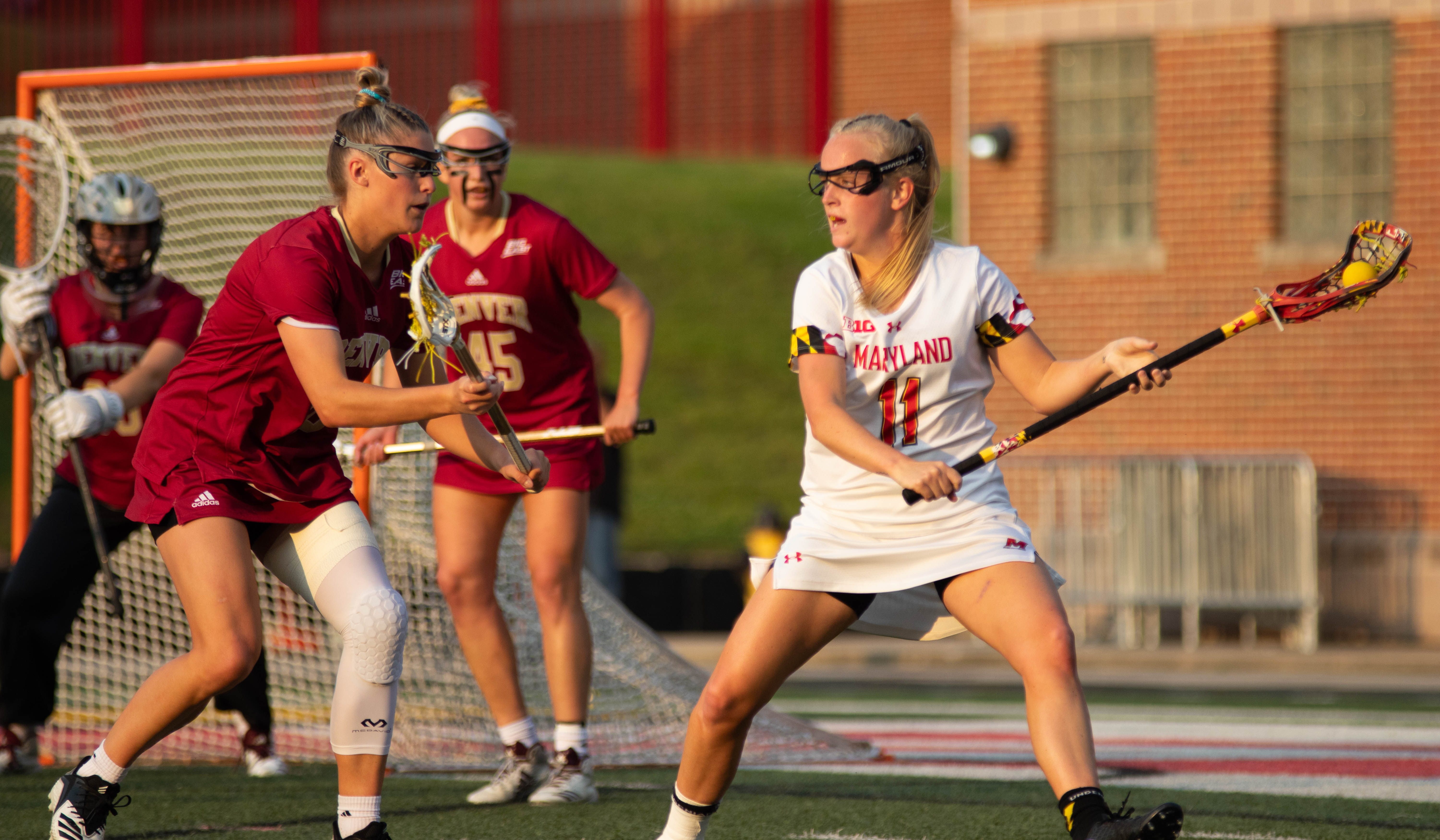 Attacker Caroline Steele looks for an outlet in Maryland women's lacrosse's 17-8 win against Denver in the NCAA tournament quarterfinals on May 18, 2019. (Julia Nikhinson/The Diamondback)

All three statements changed as Maryland tore through the Wildcats defense in a rout unfit for this stage of the season.

Braig’s goal — an interception followed by a classy bounced finish — not only sent the Terps faithful at Homewood Field in Baltimore into a fresh round of celebrations, it epitomized a dominant offensive performance.

In the end, when the clock ticked down to zero and Maryland had scored a blistering 25 goals to Northwestern’s 13, Reese’s squad had put together their strongest performance in their penultimate game of the season. The Terps avenged their lone loss this year and head into the national championship against Boston College on Sunday in electric form.

“It’s just such a energy boost all over the field,” Braig said. “It’s really exciting to have that.”

Following a lethargic 11-goal effort against the Wildcats three weeks ago in the Big Ten championship, Maryland’s offense looked the best it had all season. Nine different Terps scored, with attacker Brindi Griffin providing six goals. And they shot a scorching 64 percent, their second best shooting effort of the year.

Maryland’s fight was evident from the outset. In the opening moments, there appeared to be almost too much energy. On the first possession, midfielder Jen Giles — relentlessly face guarded all evening — drew a hard foul and lined up a free position. But, with cheers ringing around the stadium, the senior went before the whistle, resulting in a turnover.

Fortunes soon changed for those clad in all white. Slow starts have haunted the Terps for the second half of the season, but that trend didn’t continue into Friday. After being blitzed from the get-go last time against Northwestern, Maryland responded with a fast start of its own. Three goals in the first five minutes set the tone for an offense that didn’t let its foot off the gas.

“For everybody to have the confidence in themselves and their teammates to take advantage of those opportunities,” Reese said, “that’s what we’ve been encouraging all week.”

[Read more: To make the NCAA championship, Maryland women’s lacrosse will need to avenge its only loss]

On May 5, when the Wildcats snatched a Big Ten championship with a 16-11 win, the Terps’ inneficiency on free-position opportunities proved to haunt its attack. Maryland shot just 2-for-7 in those situations.

Reese remembered that statistic, and had the team work on its accuracy on free-position looks in the buildup to the final four. And it showed on Friday. Maryland nailed 75 percent of its free positions, crucial in opening up an insurmountable lead.

“These are huge plays,” Reese said. “And that’s a big difference from where we were three weeks ago.”

Northwestern kept it reasonably close until 11 minutes into second period. At that point, Maryland locked in on both ends of the field. It held the nation’s then-second best offense scoreless for the last 19 minutes, turning a narrow 16-13 lead into a dominant 25-13 blowout.

“It was just Maryland defense,” goalkeeper Megan Taylor said. “We did the little things … and I was able to have [the defense’s] back.”

Maryland’s efforts awarded them a rematch of last year’s semifinal bout with Boston College, a team that boasts a top-five offense and top-25 defense to create difficult matchups on both ends.

The Eagles are led by attacker Sam Apuzzo and midfielder Dempsey Arsenault, both of whom are Tewaaraton finalists. But, similar to the Terps, Boston College poses threats all over the field. Four players have notched more than 70 points, and the team shoots just under 50 percent.

Still, Maryland seems to be peaking at the right time. The Terps will hope that the 25-goal outburst is merely a taste of what’s to come as they fight for a national championship.

“That’s the lacrosse we want to play,” Reese said. “And that’s the game we’re looking to have.”