To make the NCAA championship, Maryland women’s lacrosse will need to avenge its only loss 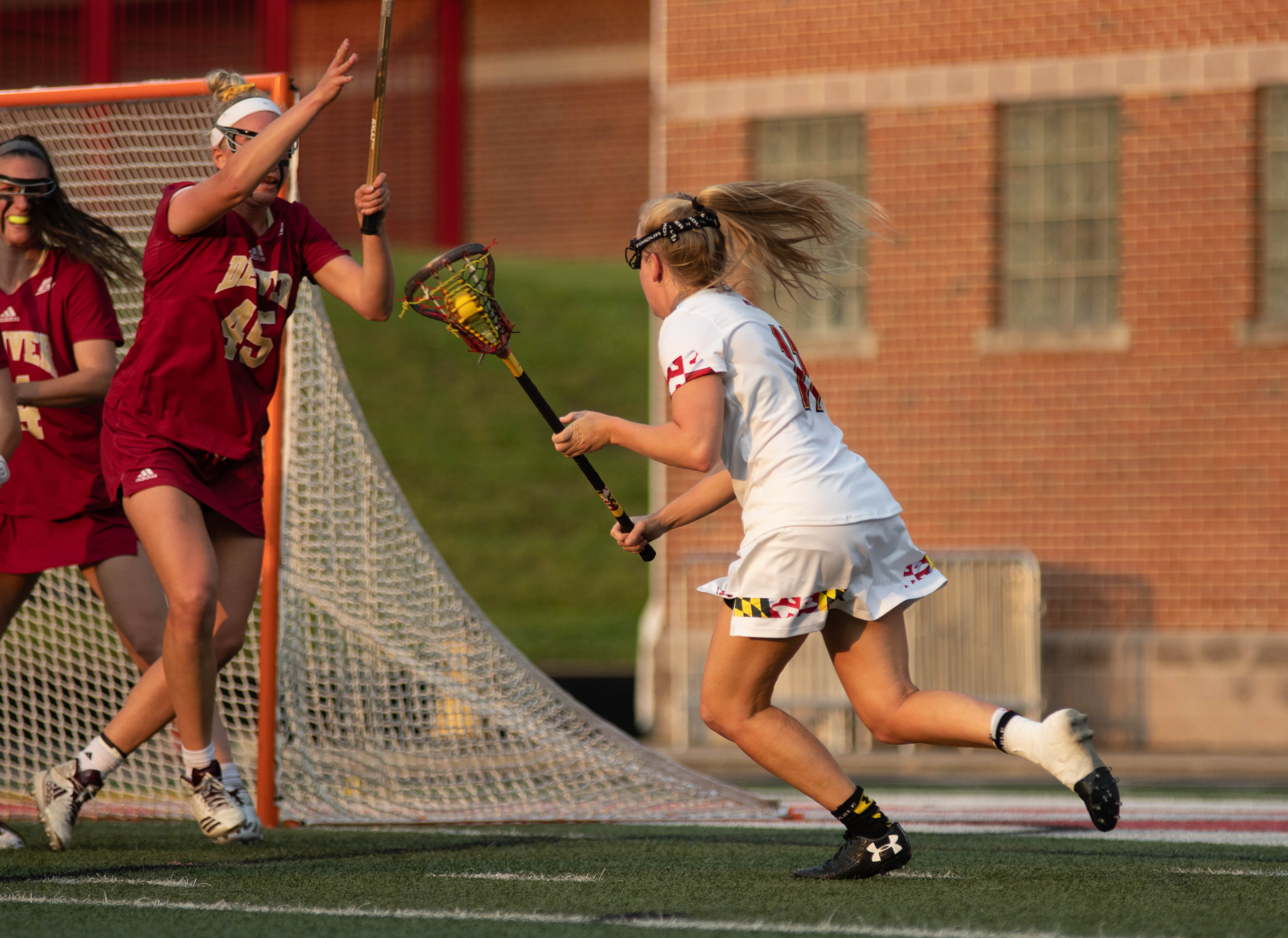 With her back to the goal, Northwestern attacker Izzy Scane feigned a dropoff pass to attacker Selena Lasota before darting to her right. After the fake put Maryland women’s lacrosse defender Lizzie Colson off balance, Scane maneuvered in front of the goalmouth before burying a close-range shot.

The tally put the Wildcats up 10-4 in the Big Ten tournament championship with just 17 seconds remaining in the first half, prompting Scane and company to huddle and celebrate. Just feet away, the Terps gathered, too — but to figure out what had gone wrong in their worst half of the season.

Entering the May 5 matchup, the undefeated, senior-heavy Maryland squad was the overwhelming favorite. But the Terps crumbled emphatically, falling 16-11, unable to overcome the six-goal halftime deficit.

Since the loss, Maryland has rebounded with convincing wins against Stony Brook and Denver in the NCAA tournament. Now back to their dominant ways that propelled them to the No. 1 overall seed in the tournament, the Terps are out for revenge when they face No. 4-seed Northwestern in their semifinal contest Friday.

Maryland has gotten to know Northwestern’s high-powered attack well this season. On April 11, the Terps survived early struggles en route to a 17-13 win in Evanston, Illinois. They couldn’t produce similar heroics in the second meeting.

But Maryland has quickly rebounded from its lone loss, toppling two of the best defensive units in the country by a combined 18 goals. Now, the Terps will have to replicate that success against some of the country’s best offensive weapons — the catalysts of Northwestern’s upset win in the Big Ten tournament.

On May 5, Northwestern stormed out to an early lead. With the Terps keying in on Lasota — who averages the third most goals per game in the NCAA — Scane was afforded space to operate. The freshman notched four first-half goals, instrumental in building a 10-4 lead at the break.

This time around, Maryland is looking to utilize a more team-based focus to slow down the nation’s second-best scoring offense.

“We have learned so much from watching those games over,” defender Meghan Doherty said. “We can be so much better.”

That strategy was successful against Stony Brook and Denver. Although neither possesses the Wildcats’ offensive firepower, both have shown an ability to fill up the scoresheet. Even so, Maryland held them to eight goals apiece.

“We came out and did what we needed to do,” Reese said. “On both ends of the field.”

Northwestern’s 16 goals against the Terps were fewer than its season average of 17.65 per game, but it was the most Maryland had allowed all season as it struggled to keep pace.

It all started with the stifling of midfielder Jen Giles. The team leader in points, Giles failed to score, missing all five of her shots. And with Giles rendered ineffective, the Terps struggled to generate anything elsewhere offensively. Their 34 percent shooting performance was a season low.

In the two games since then, Maryland has rediscovered its early-season offensive dominance. Attacker Caroline Steele’s recent hot-streak may be the difference maker Friday night. The senior — hindered by injury all season — has 10 goals to her name in the last two outings.

“When it comes to NCAA time, and it’s near the end,” Steele said, “the adrenaline is at a whole new level.”

But Steele won’t have to push her way through the final four alone. Midfielder Erica Evans, attacker Brindi Griffin and Giles have all caught fire at the right time. The end product has been two 17-goal outbursts in the tournament thus far, with over half of the goals on assists. With Giles likely being guarded tightly again, the Terps may need to again rely on spreading the ball.

“So far, we’ve been looking good,” Evans said. “We’re gonna take that mentality into next game … moving the ball, moving around, and using our space.”

In the weeks since their Big Ten tournament disappointment, the Terps have tweaked their offense and honed in on defense. They have carved up two of the best defenses in the country, racking up goals and limiting their opposition to single-digit outputs.

And now, they have a chance for revenge with a national championship appearance on the line.

“I’m excited,” Doherty said. “I’m so, so excited to be able to get them again and prove that … we’re here and not going anywhere.”