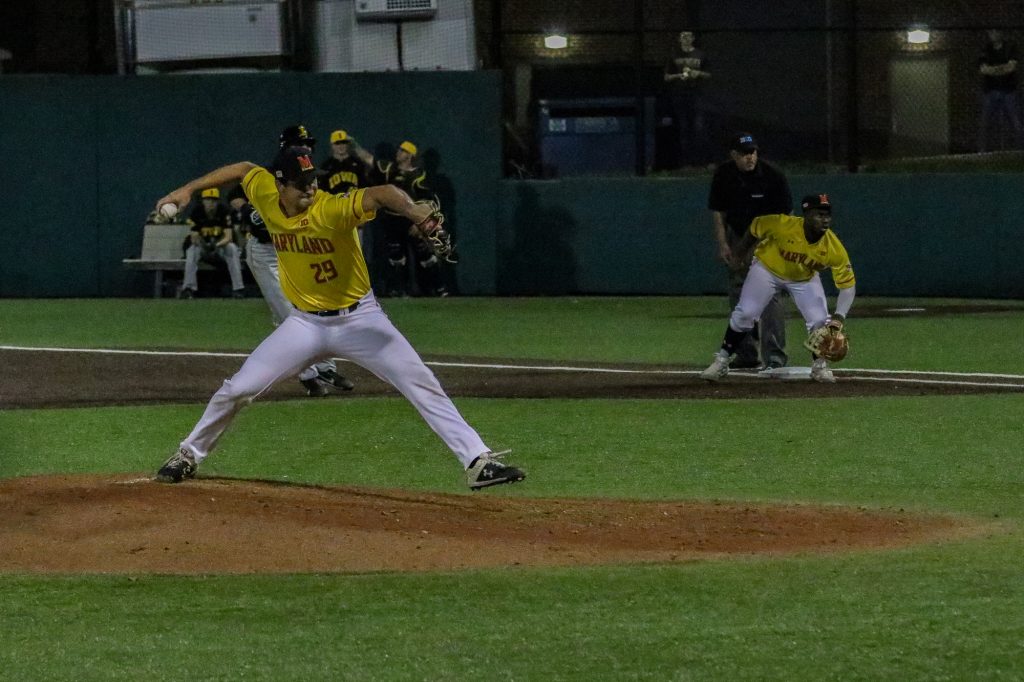 Right-hander Elliot Zoellner throws a pitch during Maryland baseball’s 8-4 win over Iowa at Bob “Turtle” Smith Stadium on May 17, 2019. (Ryan Romano/For The Diamondback)

He had caught center fielder Jesse Franklin wandering lackadaisically in between second and third base, and the inning appeared to be all but over. In the middle of the pickle, though, shortstop AJ Lee’s attempted toss to Wright ricocheted off Franklin’s helmet and into foul territory, allowing Franklin to score and Blomgren to reach third.

The baserunning miscue should have ended the frame. Instead, it ignited it.

A single from first baseman Jimmy Kerr drove in Blomgren to push the lead to 4-0, giving No. 2-seed Michigan a commanding edge that it built on late to eliminate the No. 6-seed Terps from the Big Ten tournament with a 10-4 win Friday.

Michigan tagged left-hander Tyler Blohm early after he offered up a free pass to leadoff hitter Jordan Nwogu in the first inning. Then, a Franklin grounder skipped just over the glove of a diving Lee, providing the Wolverines with two runners on and no outs.

A sacrifice bunt moved Nwogu and Franklin up, and Blohm continued to battle with his own control. A wild pitch plated one, and a groundout scored another to give Michigan an early 2-0 lead — reminiscent of the teams’ series in early May, when the Wolverines walloped the Terps by a combined 33-12 score in a sweep.

After Maryland couldn’t muster anything off a hit batter in the bottom half, Blohm began the second frame in an all-too-familiar fashion. A five-pitch walk to left fielder Miles Lewis prompted coach Rob Vaughn to visit the mound. Vaughn took the ball from Blohm, ending the junior’s day prematurely, as he dipped into his bullpen in an attempt to avoid further damage.

Right-hander Elliot Zoellner only continued the free-pass trend, though.

His first four pitches missed the zone to put runners on first and second with no outs for the second straight inning, and this time, pitching coach Corey Muscara made his way to the mound before delivering an animated plea to the junior reliever. The visit paid dividends, as Zoellner fought his way out of the jam, retiring the next three hitters.

And it likely inspired a revitalized outing for the Annapolis native.

Entering the day, Zoellner’s 8.83 ERA would have been less than ideal to go long against the conference’s top hitting lineup. On Friday, his arsenal proved to be just what the Terps needed.

A three-up, three-down third frame for Zoellner kept the deficit manageable, but Maryland’s hitters struggled to solve left-hander Tommy Henry. Lee’s single with two outs in the bottom half of the frame gave the Terps their first hit of the game — but it was ultimately futile. Lee finished the day 4-for-5 with a home run.

Although two Michigan hitters reached in the top of the fourth — one on a single and the other after getting hit — Zoellner continued to battle, striking out two and forcing a fly out. His relief effort concluded after 3 ⅓ scoreless frames, four strikeouts and one hit allowed — keeping Maryland alive in a game that appeared to be slipping away early.

And when Wilden entered in Zoellner’s stead, he too surrendered a walk to his first batter. He bucked the early jitters just as his fellow reliever did, though, and worked his way to two outs with a runner on second. But Michigan was the beneficiary of a stroke of luck after Maryland’s throwing error in the pickle extended the inning and the deficit to 4-0.

In the bottom of the fifth, Bednar was afforded an extra chance at the plate after Blomgren ran into the third-base umpire trying to catch a foul pop up, and the right fielder took advantage later in the at-bat, launching a two-run shot to left field off Henry, who had glided through four innings of work with just two hits allowed. The home run trimmed the deficit to two.

But Zoellner’s stellar showing and Bednar’s breakthrough weren’t enough, and the Maryland bullpen faltered late. Right-hander Nick Turnbull and left-hander Sean Fisher combined to allow two runs in the seventh inning. Right-hander Sean Heine surrendered another in the eighth, and right-hander John Murphy was rocked for three in the ninth, putting the game well out of hand.

Freshman Maxwell Costes hit his third homer of the tournament in the bottom of the eighth, and senior AJ Lee hit a solo blast in the ninth inning. While both parting shots were inconsequential in the moment, Lee’s was a storybook ending to his Maryland career, and Costes’ team-leading 15th longball was a subtle reminder of the young Maryland squad’s potential moving forward.