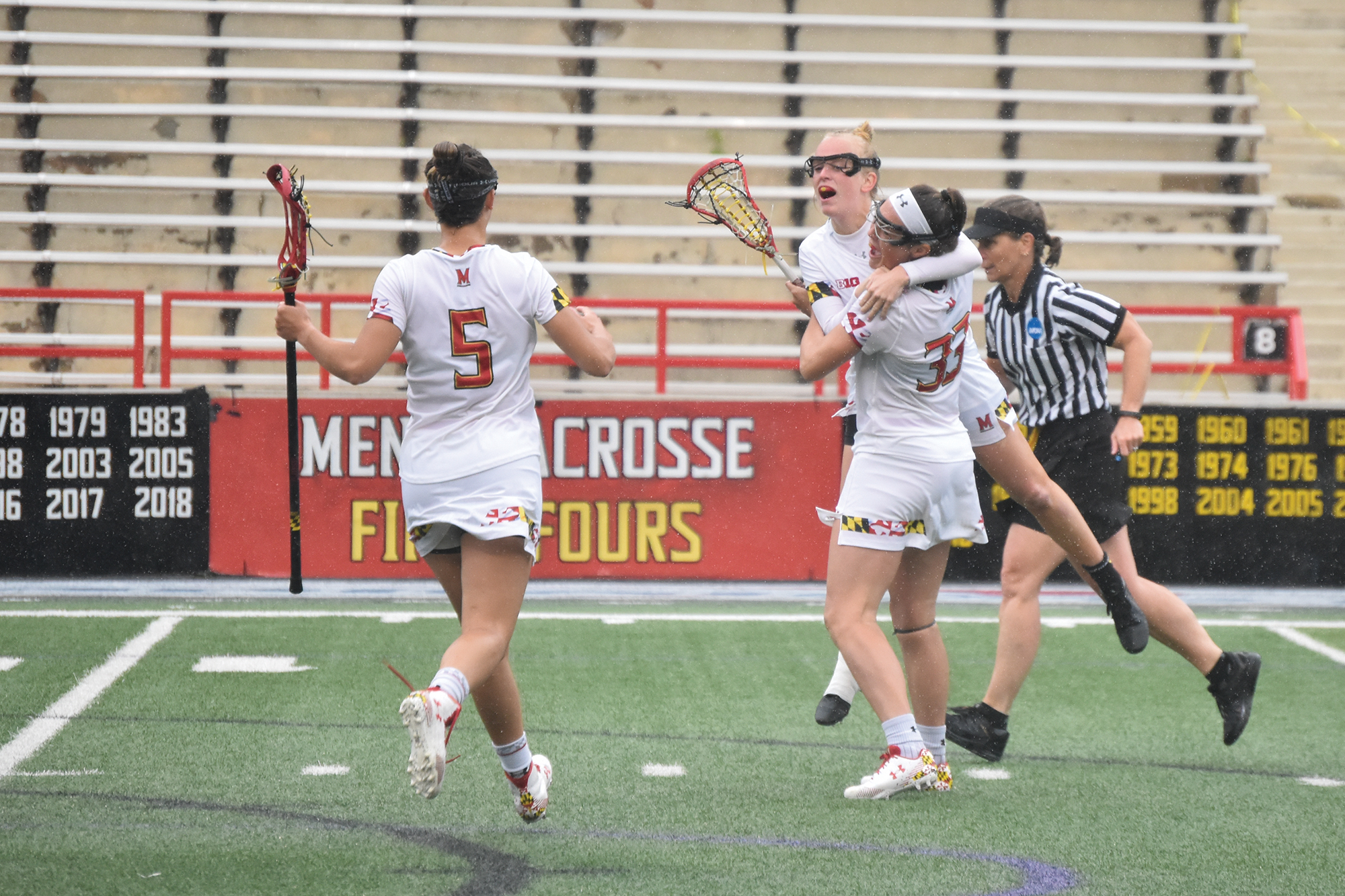 Midfielder Jen Giles runs to celebrate with attacker Caroline Steele and midfielder Erica Evans after a goal was scored during the 17-8 win over Stony Brook at Maryland Stadium on May 12, 2019. (Joe Ryan/The Diamondback)

Both times, Seawolves goalkeeper Anna Tesoriero had no chance keeping Evans’ shots out. While some teams have attempted to blanket the graduate transfer, Evans’ easy looks were a product of Maryland’s offense finding holes in Stony Brook’s zone defense.

But the Terps haven’t always found success against such schemes this year. So against Denver on Saturday in the quarterfinal of the NCAA tournament, Maryland will need to find answers for a zone defense once more, grappling with the best scoring defense in the country.

“[Denver] throw out a really interesting zone,” midfielder Grace Griffin said. “It’s something we’ve really had to work on.”

Few teams play the Terps man-to-man — their attacking talent often exposes mismatches — so Maryland has to deal with a variety of different defensive schemes every week. Coach Cathy Reese’s squad has mixed results with zone defenses, though.

The Terps have ripped it apart at times, such as in the Stony Brook contest, walloping their second-round competition 17-8. But it has also made them splutter and look lethargic, evidenced by the difficult first half against Georgetown on April 17.

In that half, the Hoyas’ zone forced seven turnovers and coaxed the Terps into a tepid 4-for-13 shooting effort. Their offensive struggles carried over to the other end, and Maryland trailed 8-4 at the half. Although a spirited second-half comeback saved the Terps, other teams may have adapted their defense accordingly.

Northwestern also made life difficult, switching between both man and zone defenses in the Big Ten tournament title game. The adjustments interrupted Maryland’s often-rapid ball movement and forced difficult shots. That, coupled with a strong performance from Wildcats goalie Mallory Weisse, led to the Terps’ first loss this season.

After that disappointment, Maryland spent more time working on undoing zone defenses in the week leading up to the Stony Brook matchup. And it showed. While the Seawolves made life difficult early, Maryland was able to pull away, with six different Terps contributing assists in a comfortable victory.

“We have a ton of assists when we play [against] a zone,” Brindi Griffin said. “It makes it really fun.”

But Denver presents a different challenge. Its nation-best scoring defense has limited some high-scoring offenses, including Michigan last week in the NCAA tournament. The Wolverines managed five goals, their second fewest in 2019 following a 14-3 loss to Maryland.

“Their zone is different than Stony Brook,” Reese said. “But Denver does it and does it well.”

While Denver’s defense is formidable, it’s less effective on the offensive end. The Pioneers are just outside the top 20 in shooting percentage and scoring offense, and they rank No. 74 nationally in draw controls.

Maryland’s proven to be a more well-rounded team this year. But with an imposing defense that has stymied other high-scoring teams, there’s no room for complacency.