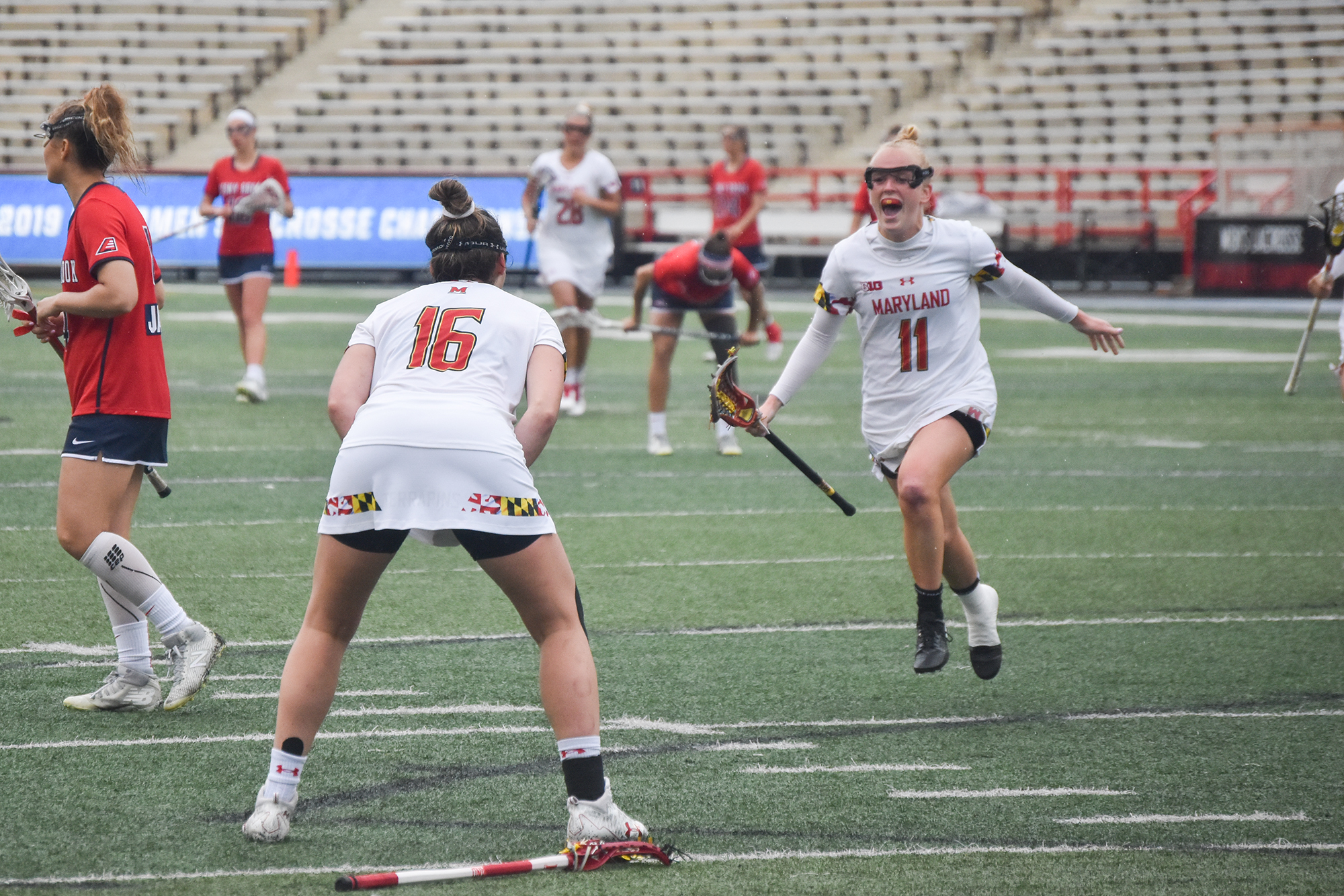 Caroline Steele runs towards Kali Hartshorn after Hartshorn scored a goal during the 17-8 win over Stony Brook at Maryland Staduim on May 12, 2019. (Joe Ryan/The Diamondback)

After stumbling out of the gate against Northwestern in last week’s Big Ten tournament championship game, the Terps were once again struggling early. In their NCAA tournament opener, Stony Brook jumped out to a 3-0 lead.

So, Reese called for a timeout, huddled her players and yelled.

Though Reese didn’t reveal its exact content, the speech seemed to flip a switch. The Seawolves scored the next goal, but the timeout served as a turning point for Maryland, transforming a four-goal deficit into an emphatic 17-8 victory.

“I had a different feeling coming into this game that we were kind of gonna start off on fire,” Reese said. “That’s why we took the timeout. That’s why we wanted to take a break, reset.”

Reese’s words, combined with changes on draw controls and other tactical switches, saw Maryland claw its way back into the game, producing 50 minutes of clinical lacrosse to nullify the 10 slow ones before it.

A main source of Maryland’s early game struggles in the past two games has been its inconsistency on draw controls. Although the Terps rank 24th in the nation in draw controls per game, both Northwestern, currently fifth nationally, and Stony Brook, at 40th, seemed to have the Terps figured out early.

In similar fashion to the Wildcats in Baltimore last week, the Seawolves nabbed the first five draw controls, banking a 4-0 lead with a forced shot from attacker Kali Hartshorn as the lone attempt to cut into the scoreline.

“I said to my wife this morning, ‘We need to make them remember the Northwestern game,’” Stony Brook coach Joe Spallina said.

And for a while, it looked as if the Seawolves had the Terps rattled. However, after her timeout, Reese made some key adjustments on the draw, sending in midfielder Meghan Siverson, who featured as a draw-control specialist at Louisville before transferring to Maryland in 2017.

“They were trying to draw it away from [Hartshorn],” Reese said. “So we put [Siverson] in, just for a different look, and she takes the draw a different way.”

The change worked. After some early struggles, the Terps would eventually battle back to a more respectable 11-7 draw control deficit by the half.

Maryland capitalized on its newfound extra possessions and started to find its rhythm on offense. Once again, the Terps leaned on the pace and creativity of midfielder Erica Evans. With limited shooting opportunities early on — though she did bury one free-position look — she turned to setting up her teammates, providing assists for her fellow midfielders.

“[The Seawolves] have a great zone defense,” midfielder Jen Giles said. “So all week we were working on finding those lanes.”

Later in the first half, though, Evans got her shooting opportunities. Over a four-minute stretch, the graduate transfer notched four goals in five shots, boosting Maryland to a 11-6 halftime lead.

While the Terps’ improvements on draws and shooting efficiency were vital, their improvement on defense held Stony Brook out of reach.

In the opening minutes, Maryland had no answer for the Seawolves’ ball movement. The visitors consistently found space, including numerous looks right in front of goalkeeper Megan Taylor the Tewaaraton Award finalist couldn’t deny.

But after going down 4-0, the Terps started to turn things around. They stayed tight with cutters and shut down midfielder Ally Kennedy, blanking the nation’s fourth most prolific goalscorer. And although Stony Brook tacked on two more goals — totaling six before 12 minutes had passed — Maryland rediscovered the defensive stability that had evaded them against Northwestern.

“We started talking a lot more,” defender Shelby Mercer said. “Working together and picked up our energy a little bit.”

Reese’s timeout and animated speech five minutes into the first half triggered a turnaround for her team, and the ensuing personnel changes tipped the matchup in Maryland’s favor.

The Terps tied the game about 10 minutes after their coach’s words. Midfielder Grace Griffin delivered the big play, controlling a pass and finishing from close range. While Griffin slammed her stick into the ground and jumped around jubilantly, Reese remained composed.

“We made the change and the next 50 minutes were a lot different,” Reese said. “I wish we could have extended that to 60, and that will be a big part of our conversation as we move forward.”