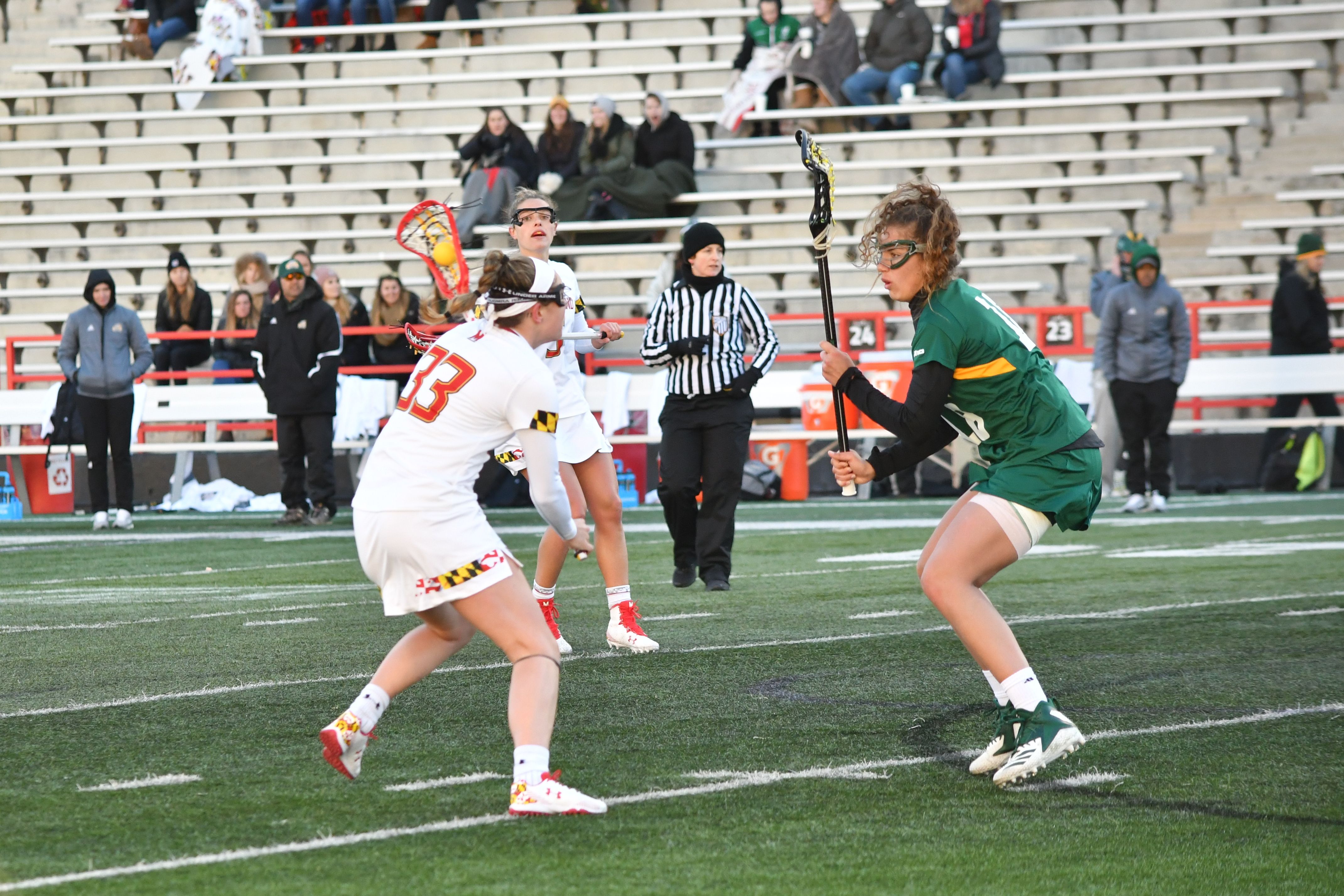 Maryland women’s lacrosse defender Lizzie Colson charged down the field and into the offensive zone late in the first half against Northwestern, before dumping the ball off to attacker Caroline Steele. Yet, the Terps stood still.

With little off-ball movement, Maryland failed to generate a clean look on net, and the shot clock dwindled down, eventually leading to a turnover.

The Terps have rarely faced offensive dilemmas this season, as owners of the nation’s seventh-best scoring offense. But against the Wildcats in the Big Ten championship on Sunday, Maryland’s offense struggled to use ball movement to find exploitable one-on-one matchups.

The Northwestern squad — known for its prowess on offense, rather than defense — exposed the Terps’ weaknesses. And when Maryland takes on either James Madison or Stony Brook on Sunday to open their NCAA tournament, they’ll hope to correct those flaws and rediscover their signature style in the pursuit of a national championship.

“We’ve had moments of brilliance where everyone’s involved offensively,” coach Cathy Reese said. “And some moments where we’ve struggled a fair bit where people are standing and watching.”

Although consistent for most of the season, the Terps offense has tailed off in recent weeks. After turning in a 53 percent shooting effort against Georgetown on April 17, Maryland’s accuracy has declined in every game since.

Opposing teams have adjusted to the high-scoring midfield duo of Erica Evans and Jen Giles. By having them both constantly guarded, they have put pressure on the rest of the Terps offense to create chances. And without its top two scorers getting sufficient touches, Maryland has struggled to facilitate clear looks on goal. The Terps have still managed to score, but have been forced to grind out goals in recent weeks.

Despite Maryland’s convincing 15-8 victory over Penn State in the Big Ten tournament semifinal, the Terps managed a meager 35 percent on 43 shots, their worst shooting effort of the season at the time. They did one worse against Northwestern, notching 34 percent.

“There was a lack of intensity and energy,” Giles said. “It just seemed like we were a bit stagnant.”

Giles in particular has been in an unusual rut. The Tewaaraton Award finalist failed to notch a goal in both Big Ten tournament games, and her shooting percentage has dropped from 52 percent to 47 percent in the slump.

But the Terps have plans to reestablish their offense into the force that powered the squad to an undefeated regular season. They will look to prove that the recent drop off was more of a temporary mishap than a permanent problem. Outbursts such as a 19-goal performance against Johns Hopkins on April 27 and the 20-goal showcase at Rutgers on March 30 are indicative of how dominant Maryland can be.

“We don’t care who our opponent is,” Steele said. “We just want to play our game.”

Maryland has been working on ball movement in practice leading up to its first tournament game with the goal of returning to form when it matters most. The quality of the defenses the Terps will play isn’t going to let up, so it’s vital for them to rekindle their offensive flame in time for Sunday’s NCAA tournament opener.

“We’ve got some changes to make, particularly on the offensive end,” Reese said. “We have to prepare for two teams who are very good and have had really good seasons.”