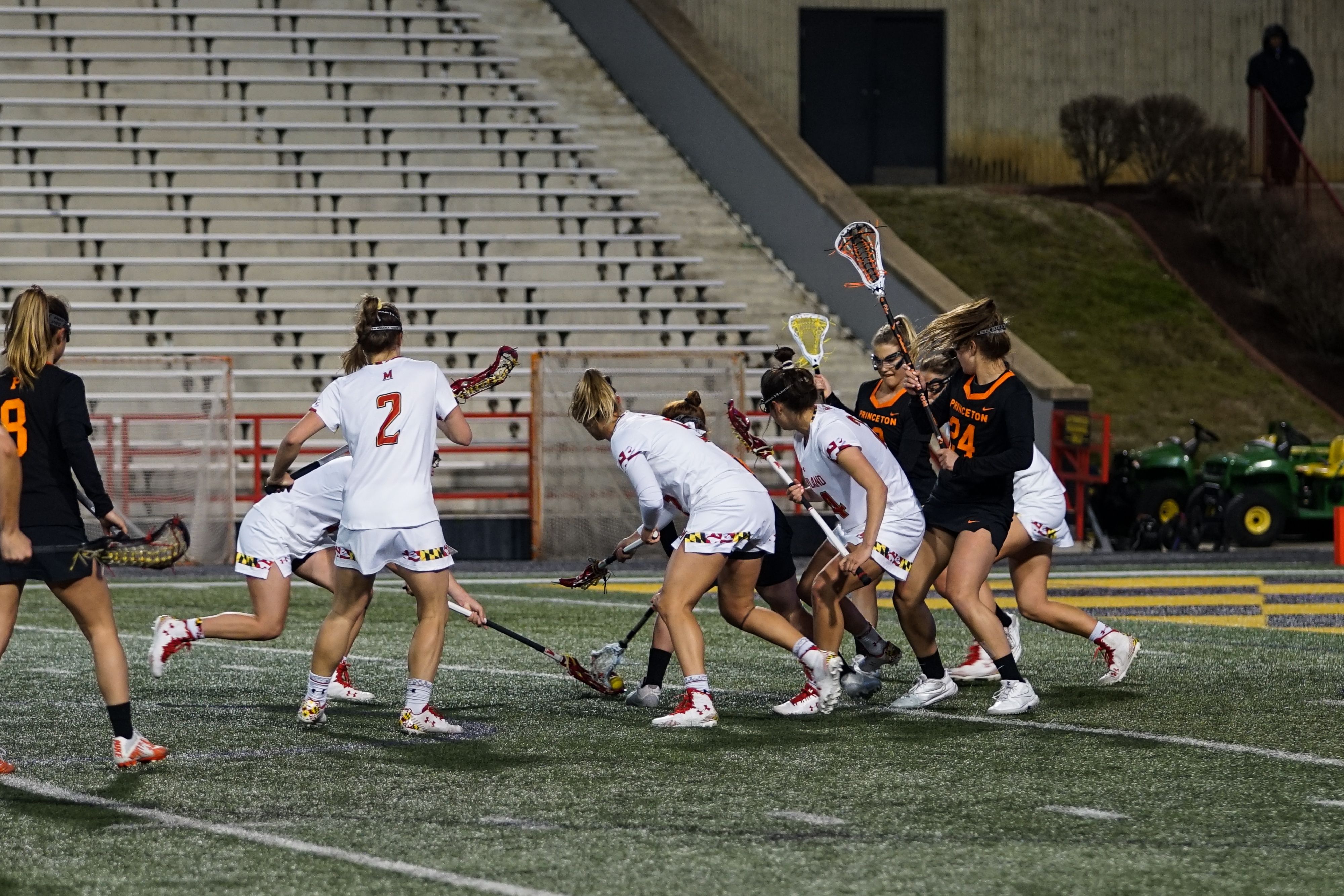 Maryland women's lacrosse fights for a ground ball during a 15-7 win over Princeton at Maryland Stadium on March 27, 2019. (Corey Hart/The Diamondback)

But when Northwestern attacker Izzy Scane — the Big Ten freshman of the year — spun around defender Lizzie Colson and finished easily, the Terps were put behind first for their sixth consecutive game. In the past, nervy starts gave way to commanding finishes.

This time, though, Maryland couldn’t turn it around.

While the Terps have overcome early deficits in recent weeks, they were unable to mount a comeback against an organized Northwestern squad, losing 16-11 despite showing fight throughout.

“You have a Northwestern team that’s talented all over the field and just have an energy,” coach Cathy Reese said. “They brought it today, and we didn’t.”

Although the Terps scored four of the last six goals, Northwestern established an energy that remained constant throughout. The Wildcats dominated in most facets of the first half and built a lead that Maryland’s revitalized second half was unable to erase.

Northwestern took advantage of its energy almost immediately. Midfielder Brennan Dwyer, the Big Ten leader in draw controls, made life difficult for Colson and attacker Kali Hartshorn. Dwyer beat Hartshorn to the first opportunity of the day, spinning free and beginning the sequence that eventually led to Northwestern’s opener.

While the teams split the first four draw controls, the discrepancy in the circle widened from there.

“Maryland’s a tremendous draw team,” Northwestern coach Kelly Amonte Hiller said. “We were really excited to come out of the first half [12-3].”

Northwestern’s fight manifested in other ways, too. Facing a dynamic Maryland offense — complete with five players who’ve tallied at least 50 points — the Wildcats crowded its defensive arc with bodies and prevented cutters from finding space off the ball. With less ball movement from the Terps, they resorted to isolation play.

Normally, with the attacking talent at Maryland’s disposal, one-on-one matchups would still result in goals. However, a combination of rushed shots and goalkeeper Mallory Weisse’s 10 saves kept Maryland’s offense at bay.

“Our shooting was terrible,” Reese said. “We want to shoot around 50 percent. We were at 30 percent today, and that’s not good enough.”

The combination of the two saw the Terps trailing 10-4 at the half and needing a revamped performance to overturn their largest deficit since March 14, 2007.

And, for a few minutes, it looked as if Maryland may have a chance. Colson snagged the first draw control of the half, setting the tone for the Terps. They got on the board first thanks to a bounced shot from midfielder Hannah Warther.

But Dwyer won the next draw control, and the Wildcats scored on the ensuing possession, restoring a six-goal advantage and quelling a potential comeback bid before it gathered too much steam.

“We did adjust well on the draw,” Colson said. “It just could have happened sooner.”

Hartshorn and Colson found more success in the second period. However, they were unable to keep Dwyer at bay and split the draw control battle at seven apiece. And the Northwestern offense continued to deliver. While the Wildcats didn’t muster as many attempts, they shot an efficient 56 percent to comfortably hold on to the lead.

Despite Maryland’s improved second-half effort, it couldn’t string multiple goals together. Indeed, the Terps’ inability to keep Northwestern off the board for an extended period of time rendered a recovery effort impossible.

They pulled goalkeeper Megan Taylor in a last-ditch effort to ignite the offense, and the goalkeeper could only watch as attacker Lauren Gilbert broke through Maryland’s ranks and fired into an empty net.

“We came out at halftime in a six-goal hole,” Reese said. “Against a team like Northwestern, it’s hard to overcome.”

Maryland won the second half 7-6, showing improvement in a championship environment. Still, for all their fight, the Terps could only watch as Northwestern hoisted the trophy.

“We looked like we’ve been in a little bit of a rut,” Reese said. “When you watch Northwestern’s energy and their movement, and how they play defensively, that we need to be able to learn from.”

The season’s far from over. For a team that went 17-0 in the regular season, overcoming plenty of adversity along the way with weather delays and overtime games, one loss hardly derails the campaign.

But the Terps will also have plenty to learn from Sunday’s defeat, beginning with their early deficit and concluding with their lowest offensive output of the year.

“Offensively, we’re better than 11 goals,” Reese said. “And 30 percent is not gonna win games at this point in the season.”