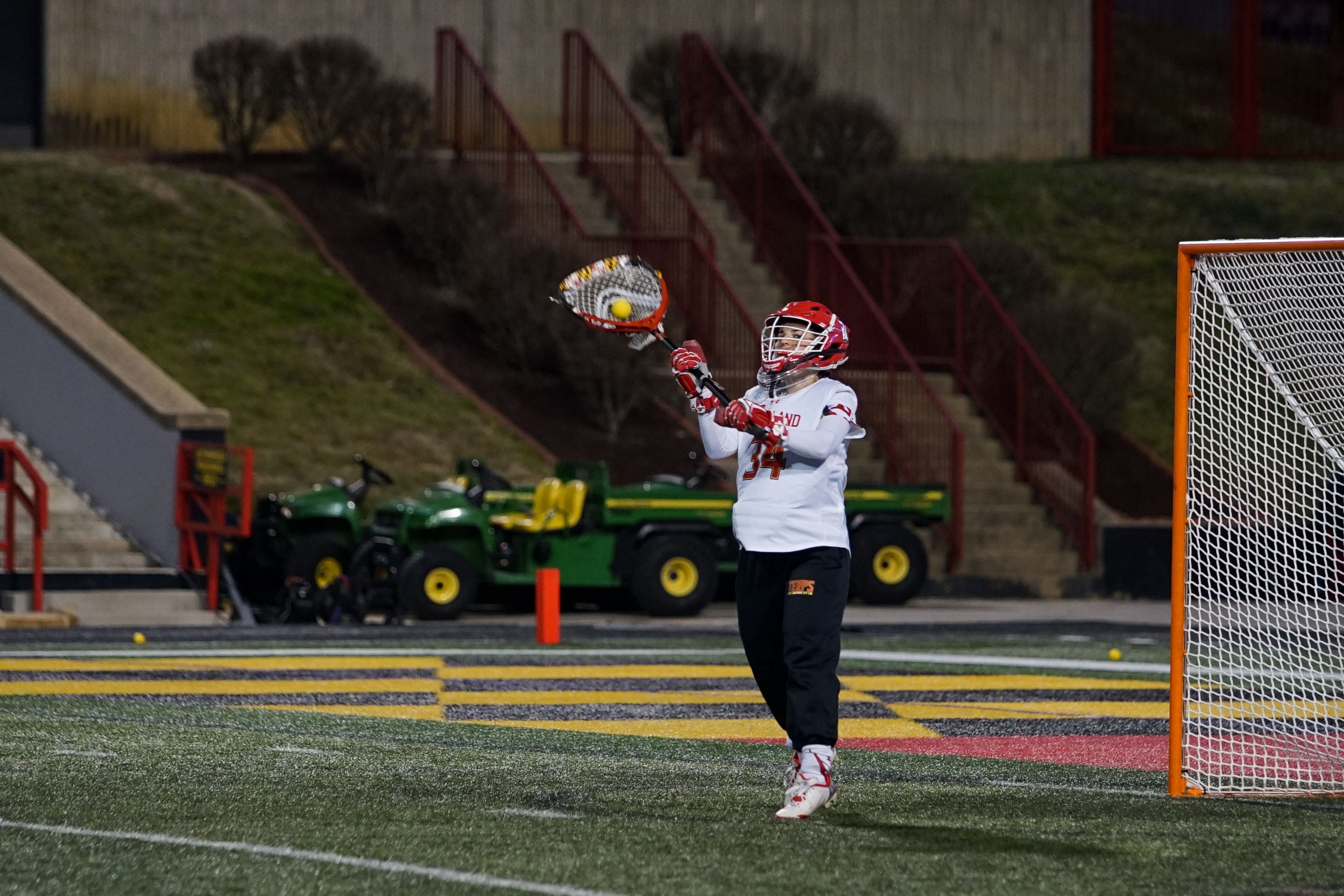 Megan Taylor during a 15-7 win over Princeton at Maryland Stadium on March 27, 2019. (Corey Hart/The Diamondback)

BALTIMORE — All season, Maryland women’s lacrosse goalkeeper Megan Taylor has stood tall in front of her cage, putting together another standout year as a shot-stopper. But as time wound down in the Big Ten championship game Sunday, the senior watched on from the sideline.

With the Terps facing a four-goal deficit against Northwestern with 2:57 remaining, coach Cathy Reese elected to pull Taylor.

And although Maryland tried to force a turnover to supplement a would-be comeback bid, attacker Lauren Gilbert broke through the defense and fired a shot that reached just beyond the outstretched stick of defender Meghan Doherty, covering where Taylor normally holds court.

While the Terps outscored the Wildcats in the second half, Northwestern’s first-half outpouring created enough of an advantage to weather Maryland’s last-gasp attempts. And Gilbert’s score with less than two minutes to go sealed the Terps’ fate in a 16-11 loss, ending their undefeated run as they watched Northwestern lift the championship trophy.

“Tough day for us but congratulations to Northwestern,” Reese said. “It was a hard-fought game.”

Just moments into Sunday’s contest, Maryland found itself trailing, conceding the opening goal for the sixth straight contest. Midfielder Brennan Dwyer, the Big Ten leader in draw controls, pushed the pace downfield for the Wildcats. She found attacker Izzy Scane, who bounced a shot past Taylor.

Scane added a second with a rocketed shot two minutes later, establishing an energy that would carry the Wildcats for the rest of the contest.

“We were really fired up,” attacker Selena Lasota said. “And ultimately really excited to be playing against a great Maryland team.”

Attacker Caroline Steele was on hand to orchestrate a quick Maryland response. Goalkeeper Mallory Weisse equaled Steele’s initial shot, but Steele pounced on the rebound and finished comfortably to bring the Terps back within 2-1.

Northwestern continued to find openings, though, as attackers Liza Elder and Lindsey McKone added goals to give the Wildcats a three-score advantage less than 10 minutes in.

“They came out with a lot of energy, a lot of intensity,” Reese said, “and made it a very difficult day for us on defense.”

Midfielder Erica Evans caught a feed from attacker Catie May and finished to bring the Terps within two. But the Wildcats continued to tack on more goals. While Lasota didn’t get on the board until six minutes before halftime, a bevy of others scored. Midfielder Claire Quinn got a step on midfielder Jen Giles and beat Taylor to produce a 5-2 lead.

“We knew we had to take advantage of every possession that we got,” Northwestern coach Amonte Miller said, “and really fight hard for some of the possessions down the stretch.”

Maryland dragged itself closer when defender Lizzie Colson stripped Quinn of possession and Evans scooped the loose ball, igniting a fast break. The graduate transfer then found Griffin streaking down the field, who calmly side-stepped her defender and finished from close.

Then, Steele added another off a free-position look five minutes later, slamming her stick into the soaked turf after making it 5-4 with 10:48 remaining before halftime.

But Northwestern didn’t let up, dominating the remainder of the first with five straight goals to enter the break ahead, 10-4. Meanwhile, the Maryland offense struggled and shot 25 percent in the first half.

Maryland started the second half with a renewed energy. Reese’s squad forced a turnover and started a fast break that caught the Wildcats sleeping. After a missed free position, attacker Hannah Warther found herself in space and bounced the ball in.

Despite the strong start offensively, the Terps couldn’t handle the Wildcats’ offense. Lasota found a yard inside and converted from close range to restore Northwestern’s six-goal edge.

“[Lasota] is great,” Colson said. “She’s just a really great shooter. She was finishing on a lot of her possessions.”

With 15:13 remaining, Griffin pulled one back for the Terps. The junior burst inside — taking advantage of a Northwestern breakdown — and shot-faked before slotting in a comfortable finish to make it 12-7. Yet the Terps couldn’t maintain any momentum. Back-to-back goals from McKone extended the lead to seven as the rain began to pour.

“They scored 12 unassisted goals on us,” Reese said. “That’s just communication and help and making sure we’re getting there.”

A short-range finish from attacker Kali Hartshorn gave the Terps a glimmer of hope with under 14 minutes remaining. Warther added to it with a short-range finish less than a minute later. But Northwestern continued to find ways to score. And although Maryland cut the deficit to 15-11 with 3:33 remaining, they couldn’t quite find an extra goal to get any closer.

Steele had a chance to further shrink the deficit, but Weisse smothered her short-range strike to effectively end the contest. The Terps pulled Taylor in a last-gasp attempt to make something happen, but it was to no avail.

“We dug ourselves in an early hole,” Reese said. “And we just kinda couldn’t get our footing under us to get out.”

As the clock expired, Wildcats players sprinted off the bench onto the field, lifting a Big Ten championship trophy as the Terps looked on, their undefeated season undone at last.

“I don’t have a reason or excuse,” Reese said. “We just weren’t good enough.”