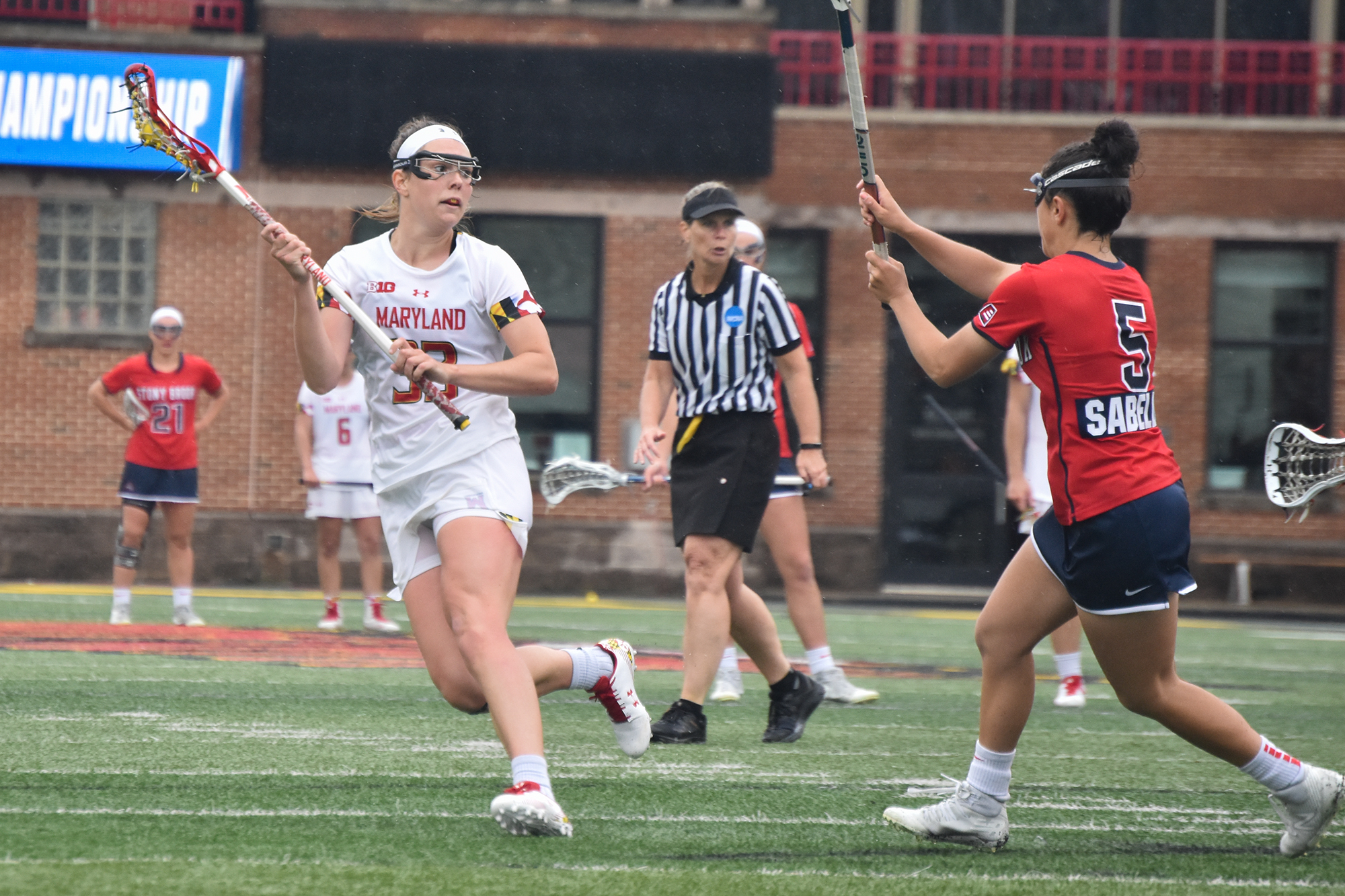 For all the individual moments of excellence that had kept Maryland women’s lacrosse’s undefeated record alive during the regular season, it needed just a touch of luck to start a turnaround in its first NCAA tournament game.

With her team up 6-5, Stony Brook attacker Taryn Ohlmiller buried a shot from close range, but whacked defender Meghan Doherty on the shoulder with the follow through. Ohlmiller earned a card and saw her goal nullified in the process.

Immediately after, Maryland started an electric offensive sequence that paved the way for a 17-8 victory. While Stony Brook built an early lead, the Terps rattled off eight straight goals to close the first half Sunday and added on from there to propel the squad into the NCAA tournament quarterfinal against Denver.

Having conceded the first goal for its past six games, Maryland had emphasized the need to get off to a quicker start. Stony Brook midfielder Sabrina Tabasso had other ideas. Just two minutes into the game, she went hard to her right and fired a shot into the top corner to open the scoring.

The Seawolves piled on from there.

Attacker Sara Moeller caught a pass, spun and had an easy look for an early 2-0 lead. Stony Brook didn’t relent, adding two more scores on wide-open looks to storm out to a four-goal edge less than six minutes into the game.

“We didn’t come here to roll over and die,” Stony Brook coach Joe Spallina said. “We’re not gonna bend the knee for anybody.”

The Terps had to wait five minutes between shots on goal, but got on the scoreboard on their second try of the day. Attacker Caroline Steele buried a free-position look, throwing her stick to the ground and leaping into the arms of midfielder Erica Evans, who added a free position score of her own less than a minute later to drag the Terps back to 4-2.

Stony Brook maintained its high level of offense, though. The Seawolves notched a couple more goals to Maryland’s one, and led by three with 18:27 remaining in the half.

Then Maryland roared back. Coming off a two-game cold spell, midfielder Jen Giles made her impact felt during the Terps’ recovery. She knocked the ball away from Tabasso and later finished the sequence, receiving a pass from Evans and making no mistake inside.

“On offense, we wanted to make sure we were all on the same page and working together,” Giles said. “With that communication comes energy and lifting each other up.”

Eighteen seconds later, midfielder Grace Griffin pulled the Terps back to 6-5, and in remarkably similar fashion. Steele found the midfielder storming toward the cage, and Griffin promptly rippled the back of the net.

“Steele did a really good job of quarterbacking that attack,” Spallina said. “She’s an outstanding player.”

But Griffin wasn’t done there. She tacked on her second of the day to tie the game with just under 15 minutes to go in the first half, erasing the early 4-0 hole.

The Terps added five more over the final 15 minutes of the period. Evans contributed four of them in a span of 3:55 to open up a commanding 11-6 halftime advantage, continuing her recent scoring tear.

“Erica crushed it today all over the field,” Giles said. “Super proud of her and Caroline.”

Although Maryland started the game poorly, it woke up on both ends of the field and dominated the last 18 minutes, burying eight of its last 13 shots.

“Against these teams that crowd the eight-meter, you have to be efficient when you shoot,” Reese said. “Because they’re crashing instantly on you.”

Maryland endured a more difficult start to the second half. Although Stony Brook’s biggest threat, midfielder Ally Kennedy, picked up her second yellow card for a dangerous follow through, the Terps didn’t immediately grab hold of the game. They started the second half with four turnovers in the final third, misplacing some passes and failing to retain control of the ball.

Meanwhile, Moeller pulled a goal back for the visitors. She saw a sliver of a lane toward the cage and took the ball into the heart of the Maryland defense. And with three defenders closing in, the senior still managed to score and bring the deficit to four.

But the Terps quashed any hopes of a comeback. Although Stony Brook tightened up on defense, Maryland’s all-around prowess shined brighter. It started with Giles. With 21:53 remaining, the midfielder cradled a pass while being forced away from goal. She swiveled on her standing foot, slinging a rocket into the top of the net to open up a 12-7 lead.

“Offensively, our players did everything they needed to,” Reese said. “They created movement… filled spaces the right way, and shot really well.”

From there, Maryland further exerted its control on the game. Attacker Brindi Griffin added her first of a day from a well-placed free position with 15 minutes remaining. And the gap would only widen further. Two goals in two minutes from attacker Kali Hartshorn extended the Maryland lead to 15-7 with 10:40 remaining.

Grace Griffin and Steele both completed hat tricks inside the final 10 minutes to stretch the lead to 17-7 and initiate a running clock. Although Stony Brook pulled one back off a free-position look with three minutes remaining, Maryland exerted total control in the second half, turning a comeback into a drubbing in Maryland’s NCAA tournament opener.

“We did a really nice job of being patient, picking the right shots, and then finishing those opportunities,” Reese said.