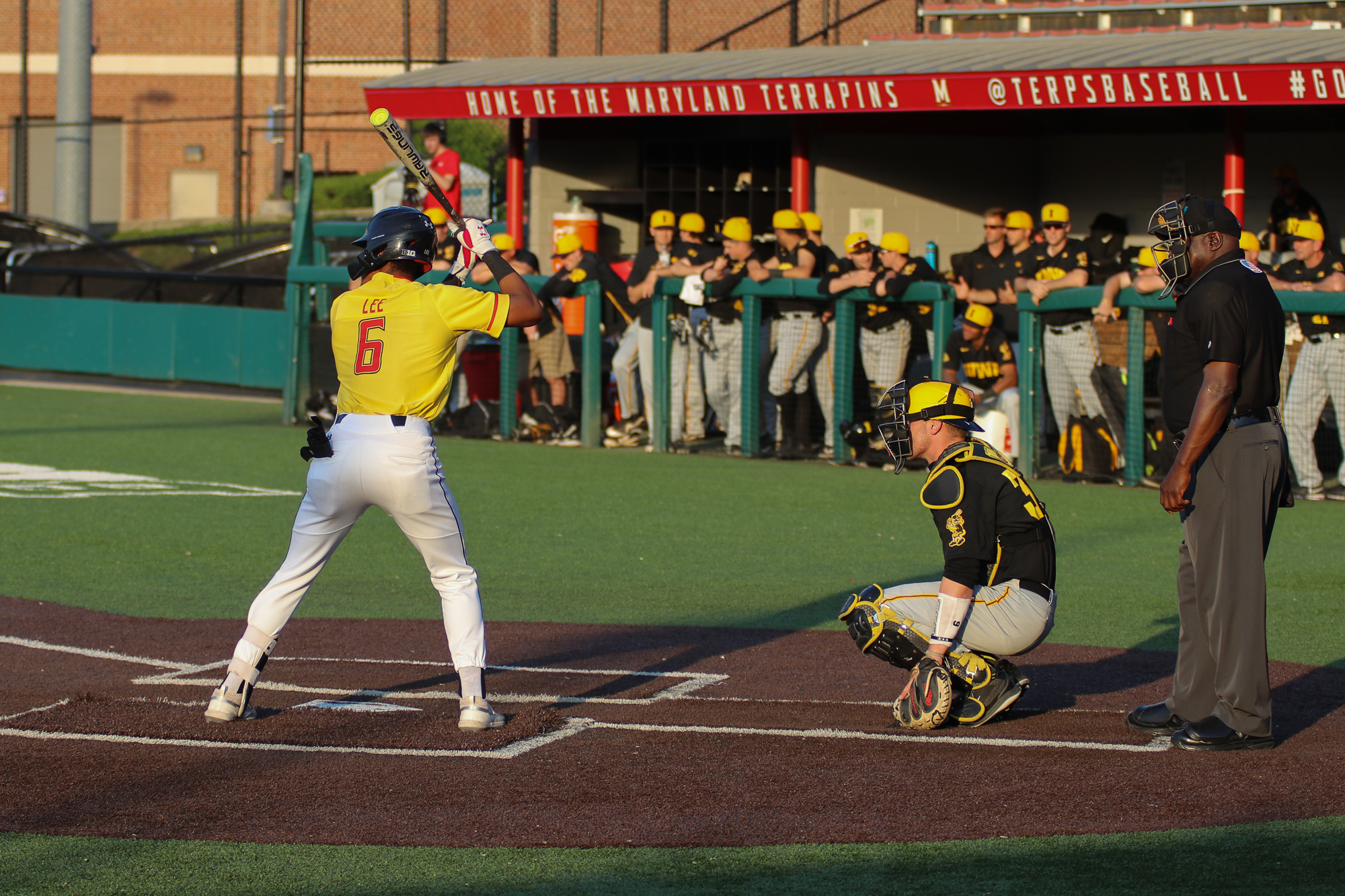 Shortstop AJ Lee waits for a pitch during Maryland baseball’s 8-4 win over Iowa at Bob “Turtle” Smith Stadium on May 17, 2019. (Ryan Romano/For The Diamondback)

Shortly after Maryland baseball’s win Friday at Bob “Turtle” Smith Stadium that ensured the Terps controlled their own destiny toward a Big Ten tournament berth, coach Rob Vaughn issued a challenge to his team.

“Sweeps are about character,” the second-year coach said, “and we have a chance tomorrow to see what kind of character this group’s got.”

He didn’t compare this team with last season’s squad, but he may as well have. In 2018, Maryland entered its final weekend in control of its own destiny. Victories against Indiana would have awarded the Terps a backdoor entrance into the conference tournament.

Instead, the Hoosiers shut the door with a sweep. Vaughn and Co. found redemption in 2019, though, playing their way into the postseason. Despite blowing a four-run lead in the eighth, Maryland fought past Iowa on Saturday, 10-8, to complete its first three-game sweep since February.

After Maryland allowed a grand slam in the eighth, center fielder Chris Alleyne came through with a two-out, two-run double into right field in the bottom half to give his team the lead for good. The Terps’ lineup posted double-digit runs for the first time since April 23, booking their ticket to Omaha, Nebraska.

“We talk about how we respond in the midst of adversity. That’s kind of one of our pillars,” Vaughn said. “And every inning that they scored, we answered. The offensive effort today was unbelievable. Absolutely unbelievable.”

Unlike last year, Maryland (28-27, 12-12 Big Ten) didn’t control its own destiny entering the final regular-season series. Vaughn implored his players to keep their eyes off results around the conference — and had to remove his own phone from the dugout. Despite needing help to make the tournament, Vaughn wanted his squad to focus on their own business and let results shake out elsewhere.

Things worked out in Maryland’s favor. Northwestern lost its series opener and Indiana took care of business against Rutgers all weekend, setting up the Terps with a win-and-in scenario in the series finale, an opportunity to right last year’s wrong.

“It feels good to be back in the tournament, because once you’re in there, anything can happen,” shortstop AJ Lee said. “The Terps are hot.”

Maryland hit right-hander Grant Judkins — who entered with a team-best 2.18 ERA — hard early in the series finale. He was chased after three frames, allowing four runs while walking three.

After designated hitter Tanner Padgett smashed a home run to right-center field to give the Hawkeyes (30-22, 12-12) their first lead of the weekend in the second inning, left fielder Michael Pineiro and catcher Justin Vought went deep in back-to-back at-bats to establish a 2-1 advantage for Maryland.

Two hustle plays from Lee in the third extended that lead. When third baseman Taylor Wright attempted to lay down a bunt to move both runners into scoring position, Lee was caught well off second base. Catcher Austin Martin fired behind Lee, who flinched left before taking off to third and sliding in safely.

“I was either going to be dead as a duck at second base, or take my chances going to third,” Lee said, who finished 2-for-4. “It paid off.”

Judkins then hurled a wild pitch, sending Lee off to the races again. Pineiro laid down a squeeze bunt later in the frame to plate right fielder Randy Bednar.

But left-hander Tyler Blohm, who entered having pitched just 12 innings this year as he battled a shoulder injury, ran into trouble in the fourth. He mixed in a few 60-foot deliveries, walking a pair of batters and needing a slick 4-6-3 double play to avoid loading the bases.

With runners on second and third and falling behind 3-0, Blohm grooved a fastball middle-in to shortstop Tanner Wetrich, who had the green light. Wetrich mashed a three-run shot to straightaway center field, making up in part for his two errors in the field to tie the game at four.

“If we call it what it is, his stuff was terrible today,” Vaughn said. “He still goes out and gives us three or four innings.”

“LaBonte was great,” Vaughn said, “but it all starts with what Mark did yesterday.”

But he faltered in the eighth, walking one and letting up two singles before Vaughn pulled him for left-hander Andrew Vail. The freshman’s fifth pitch left Wetrich’s bat in a hurry for a grand slam, his second longball of the afternoon to tie the contest at eight. Wetrich finished 2-for-4 with 7 RBIs.

Again, the Terps responded in short order. First baseman Maxwell Costes singled in the bottom half and Vought later reached when he was hit by a pitch, setting up Alleyne’s two-run double. And closer John Murphy, who allowed three runs Thursday in the ninth, worked around a leadoff double Saturday and finished the job.

“It was pretty tough the other night,” Murphy said. “It made it easier that we still came back and won, but to do that today and send us to Omaha is pretty awesome.”

Maryland — a team that’s struggled from a lack of consistency — spilled out of the dugout when Bednar caught the final out, securing a Big Ten tournament appearance after last year’s disappointment.

“This program is moving in the direction that we’ve been fighting to get it to the last couple years,” Vaughn said. “Very happy to be on this side of it this time.”