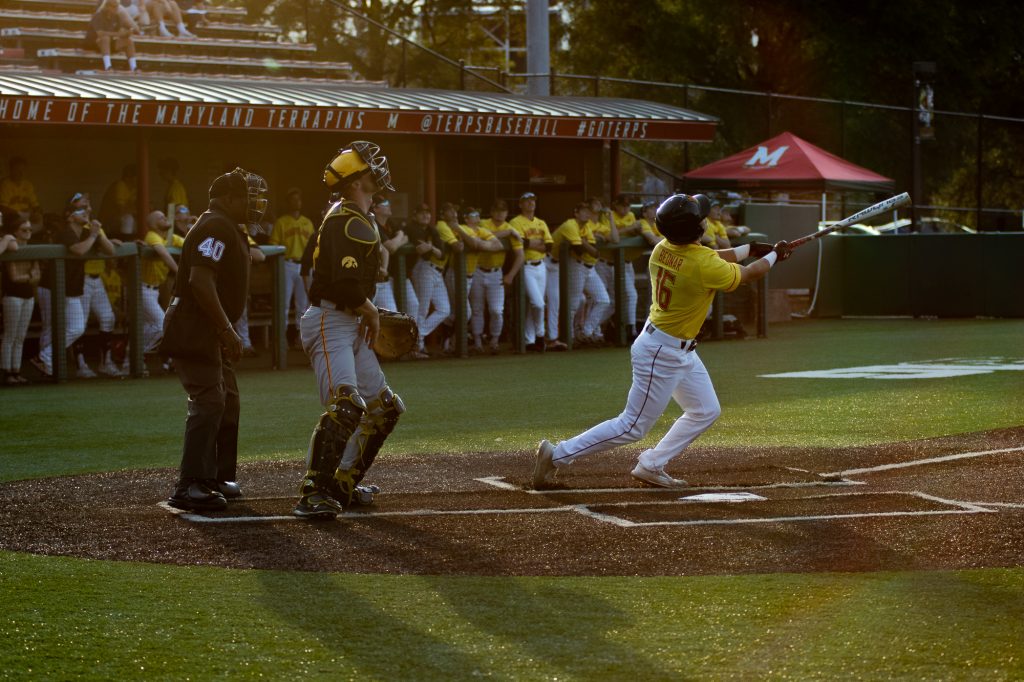 Right fielder Randy Bednar follows through after connecting on a fly ball during Maryland baseball’s 8-4 win over Iowa at Bob “Turtle” Smith Stadium on May 17, 2019. (Ryan Romano/For The Diamondback)

With two outs in the third inning and bases loaded for Maryland baseball, designated hitter Josh Maguire lined a would-be single into right field. Iowa’s Zeb Adreon, though, made sure it turned into a whole lot more. The right fielder took a few steps to his right before realizing his mistake and breaking toward the infield.

Instead of accepting that two runs would likely score, Adreon went for a desperation dive, hoping to end the frame. He landed several feet short and remained sprawled on the ground before propping himself up on one knee, watching as center fielder Ben Norman corralled the ball near the fence.

Meanwhile, Maguire kept running. He reached third with a bases-clearing triple, separating Maryland from the Hawkeyes for good in game two of a season-defining series.

With right-hander Zach Thompson pumping strikes, the Terps’ offense struck early and often in Friday’s 8-4 win. Maryland capitalized on the Hawkeyes’ miscues, ensuring the team controls its own destiny for a Big Ten tournament berth in Saturday’s regular-season finale.

“When this offense puts runs on the board, we’re a dangerous team,” Maguire said. “If [Thompson] has that comfort, you saw what he did tonight. He just goes out, attacks, and gives us a great performance.”

Iowa (30-21, 12-11 Big Ten) left-hander Cam Baumann got two quick outs to open the first inning, but doled out three straight balls to third baseman Taylor Wright for a two-out walk. It cost him. After Baumann fell behind 2-0 against Costes in the next at-bat, his get-me-over fastball got over the right-center field fence for a two-run home run.

Thompson danced out of trouble in the second, allowing a one-out double but bouncing back to punch out the next two batters, the latter with a curveball ringing up third baseman Brendan Sher on a checked swing.

“Bullpen [session] wasn’t the best. I actually threw a ball over the screen,” Thompson said. “But I figured it out in the first inning, and the curveball was working really well.”

While first baseman Izaya Fullard cut the Hawkeyes’ deficit in half with an RBI single in the third, the Terps (27-27, 11-12) responded with five runs between the third and fourth. Right fielder Randy Bednar powered a homer to left-center and second baseman Mitchell Boe’s throwing error plated Wright. Then Thompson struck out two more in the fourth before Iowa scored one with a sacrifice fly in the fifth.

It could have been more for the Hawkeyes, with a two-out double rattling into the left-field corner for Michael Pineiro to chase down. The left fielder rifled a throw to cut-off man AJ Lee, who fired home in time for catcher Justin Vought to nab shortstop Tanner Wetrich sliding into the plate.

Thompson leaned on his curveball more than usual, either finding the zone or forcing batters to reach, complementing his sinker and occasional changeup. He lasted 6 ⅔, punching out seven and allowing two earned runs on six hits.

“There’s nothing that wows you with him. He’s not going to blow a 94 past you,” coach Rob Vaughn said. “But with the action he has on his fastball, there’s so many pitches he throws that out of his hand look middle that end up in the dirt.”

When Vaughn walked to the mound to replace Thompson with right-hander Elliot Zoellner, he was banking on a continuation of Zoellner’s performance Tuesday in a low-leverage situation.

Against James Madison, the junior pitched two clean innings in an eventual 6-5 win. He walked the first batter he faced Friday, though, his final delivery reaching the backstop to put runners on the corners with two outs. Then Zoellner couldn’t field a dribbler to the right side of the mound, allowing a run to cross, slimming the score to 7-3 and prompting a second trip onto the field for Vaughn.

Right-hander Mark DiLuia got out of the seventh with a loud flyout, then pumped fastballs past all three Iowa batters the next frame.

“When he punched out the side,” Vaughn said, “he kind of killed any momentum.”

DiLuia smoothed the transition from starter-to-bullpen with 2 ⅓ solid innings, a conversion that nearly cost Maryland a series-opening win the night before when closer John Murphy gave up three runs in the ninth inning.

But the Terps won their first series since April with Friday night’s result, another homer from Lee providing an insurance run in the eighth. Maryland made the most of timely hitting and Iowa miscues to set up a win-and-in scenario for the Big Ten tournament.

“First two games here, we’ve given ourselves a shot,” Thompson said. “Everybody wants to play another week with each other. … We’re playing our best baseball right now.”