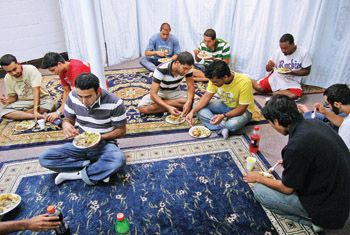 Muslim students break their fasts in observance of Ramadan, the holiest month of the Islamic calendar. (Adam Fried/The Diamondback)

Last week, I was working on a column criticizing the University of Maryland for not caring about its Muslim students during Ramadan. It was never published because it stopped being relevant. While I was writing the column, other Muslim students were working with Dining Services and other organizations on this campus to ensure that people who fasted would have food when they needed it.

During Ramadan, Muslims abstain from eating and drinking from sunrise to sunset. On either end of that time period, we eat. Ramadan started the evening of May 5, and the first day of fasting for Muslims was May 6. Normally, it’s simple enough for one to prepare their morning meal. The problem was that students with dining plans weren’t going to be able to visit the dining halls before the fast starts at around 4:30 a.m. and weren’t allowed to take food out in advance. Before students took the initiative to work with Dining Services and various food establishments, the solution was to either buy more food — which would only compound the price for a dining plan and the value lost from not eating breakfast or lunch throughout Ramadan — or just try to smuggle some toast out.

It’s not too common for an opinion column to describe ways this university actively works for its students. We usually see — and experience — the exact opposite.

But good things do happen sometimes. Executive chef John Gray and Dining Services communicated with students to come up with a solution just days before Ramadan started. When the first plan — which would have allowed students to take out a muffin and a piece of fruit the night before — didn’t adequately address the problem, dining staff responded by making pre-made meals for Muslim students to pick up and eat in the morning.

And it didn’t stop there. The Multicultural Involvement & Community Advocacy office and Muslim Alliance for Social Change are working with the Muslim Student Association to provide free iftar — the actual breaking of the fast, commonly done with dates or fruit and water — and dinner for students on campus to break their fasts. The Maryland Food Co-op, Moby Dick and students bringing food to potlucks have provided dinners.

Ramadan hasn’t come during the semester for a while — it moves earlier by about 10 days every year, so people usually spend it at home with their families and communities. The dinners that students and organizers have put together let us feel that same sense of that community and familiarity even when we’re not at home.

For me, this has been huge. As an institution, this university doesn’t actively do much for its Muslim students. We pray in a repurposed locker room, fast during finals, have to find places to pray and hope instructors are happy to let us leave class for a few minutes to do so — or plan our entire course schedule around prayer times. Often, it seems as though the administration doesn’t think about its Muslim student population.

But it’s clear there are many people who do, like the people in Dining Services who put meals together, the food establishments that provide us with dinner, the student organizers who coordinate and set up events, the buildings that have given us space to pray and eat and the non-Muslim students who have fasted and broken fast with us. To them, I say thank you.