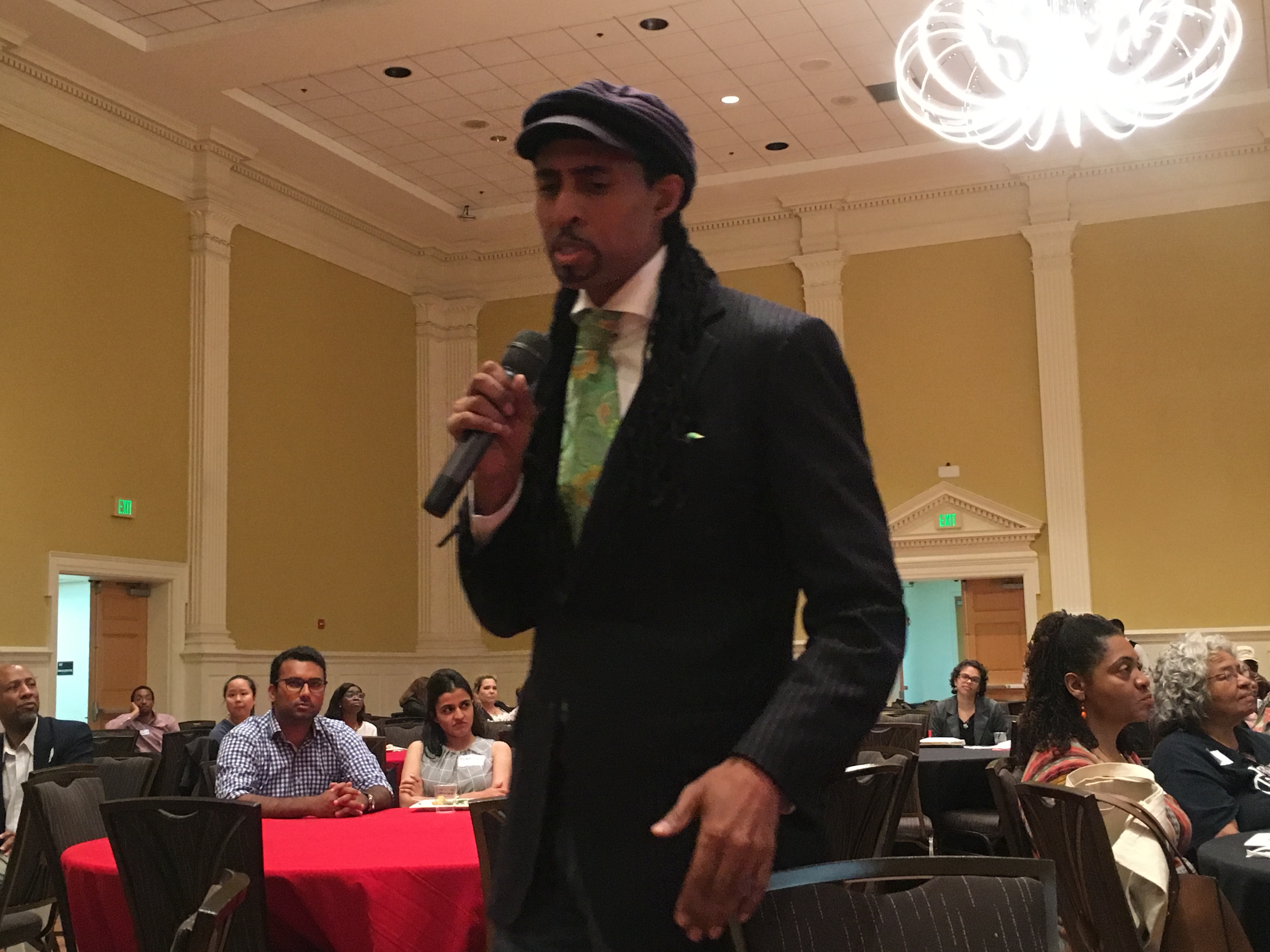 Mustafa Santiago Ali of the National Wildlife Federation addressed symposium-goers about the power of organizing communities for environmental policy change during the CEEJH symposium on May 11, 2019. (Hannah Gaskill/For The Diamondback)

By Hannah Gaskill
For The Diamondback

Students, policymakers and advocates gathered Saturday at the University of Maryland’s fifth Symposium on Environmental Justice and Health Disparities  to discuss enacting new policies in low-income areas and communities of color.

The symposium, held by the Community Engagement, Environmental Justice, and Health Laboratory, focused on supplying its nearly 300 attendees with health, legal and policy tools to implement environmental change in their communities.

Sacoby Wilson, a professor in the university’s public health school, kicked off the day-long event at Stamp Student Union with a self-described “speech and preach” session on “environmental racism,” stating that communities of color are more frequently disrupted by industry and pollution.

“This is the new Jim Crow,” he said. “Black and brown communities are used as sinks of pollution … how are you going to put America first if you don’t put our kids first?”

[Read more: “We cannot take no for an answer”: UMD students rally for climate justice]

As the day progressed, the group participated in panels with local and state legislators and workshops led by professors and researchers on topics like infrastructure and community engagement.

“It’s a work-back session,” said Jan-Michael Archer, a first-year doctoral student in the CEEJH Laboratory and an event moderator, “so that these members of the council and of the state agencies can be held accountable to their constituents — to the stakeholders that they’re supposed to be serving.”

This is the first time that the symposium has offered attendees an opportunity to hear directly from representatives about policy changes that have been enacted or are on the table, Wilson said.

“We’re trying to be transparent, but we can’t let our children drink from water fountains that have lead. I mean, that’s just not acceptable,” Ivey said, citing a report of water fountains with lead issues published on the county public schools’ website.

The panel also elaborated on other questions Wilson offered, such as how the county could be better held accountable.

Ivey said that people “have to know who to yell at,” and detailed dissatisfaction from residents on issues, such as clustered power plants in Brandywine, affecting the air quality.

“You have to know where to make an impact where you are. And what we can do is hold people accountable who are in the positions that can make those decisions,” Ivey said. “We all rise and fall together, we all breathe together and we have to make sure that all of us are looking out for all of us.”

The event concluded with a keynote speech from Mustafa Santiago Ali, the vice president for environmental justice, climate and community revitalization at the National Wildlife Federation.

In his speech, he said that the effects of climate change could have been slowed if more attention had been paid to low-income communities and communities of color where they were first being seen.

“People for decades were saying, ‘These breaches are happening. People are getting sick,’” he said. “And folks didn’t wanna pay attention.”

Ali closed his speech with examples of communities gathering together to effect change, citing the 2017 Women’s March and the March for Science.

“People will tell you you don’t have power,” said Ali, “and I’ll prove to you that you do.”