“We cannot take no for an answer”: UMD students rally for climate justice 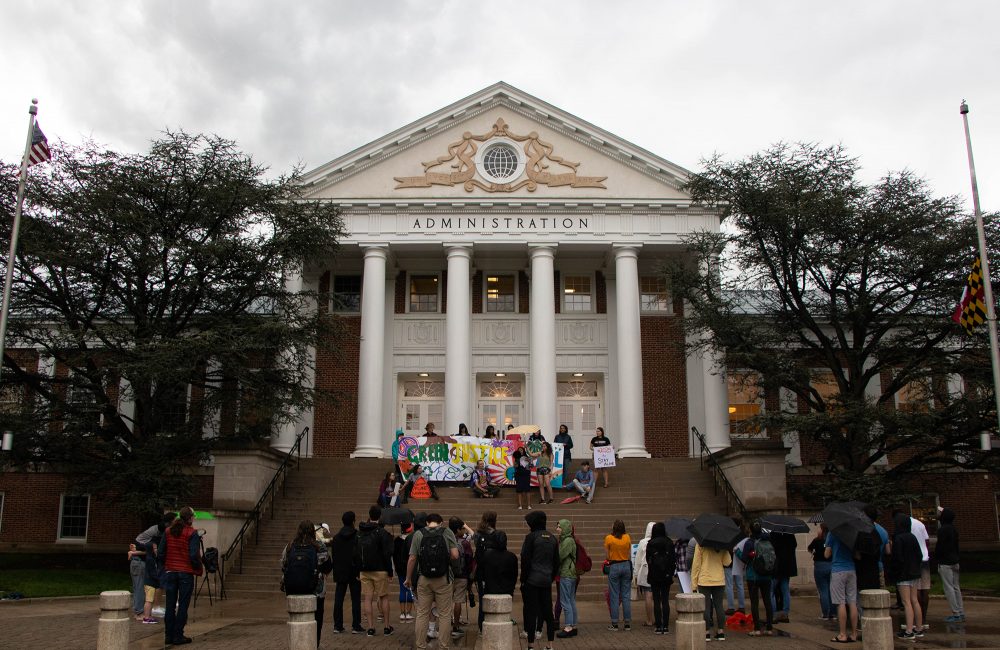 A group of University of Maryland students marched across the Memorial Chapel field on Friday, heading toward the Service Building on Route 1 — the source of most of the campus’ electricity.

“Blue skies, green grass,” they chanted, “not if we keep using gas!”

More than 40 students participated in the march, called the UMD Rally for Climate Justice. This university’s Sustainability Cooperative and MaryPIRG organized the event.

Before beginning their trek, the students gathered in front of the Main Administration Building. Some spoke to the crowd about the importance of fighting climate change around the world — and on this campus.

Dale Aram Tassbihi, a senior civil engineering major, spoke about recent flash flooding in Iran and the lack of international support for Iran’s affected citizens due to U.S. sanctions against the country. She called for people to take action against the impacts of climate change across the globe, regardless of their nationality.

“In addition to national and international action, we have to take local action, and this is what that looks like,” she told the crowd.

Mckayla Wilkes, a congressional candidate for Maryland’s 5th district — which includes the university — also spoke at the administration building, emphasizing that she is running on a campaign for climate justice.

Wilkes talked about friends living in the southern part of the state who lack clean water. She said incumbent representative Steny Hoyer, who Wilkes will face in the Democratic primary in 2020, hasn’t paid enough attention to those issues, and criticized him for accepting campaign donations from fossil fuel lobbyists.

“It’s an underrated and untalked about issue amongst the politicians that are currently in Congress, and I think that they think since it doesn’t affect them, it’s not important,” Wilkes said. “They think that it’s radical, but since when is caring about our climate radical?”

Over the past few weeks, MaryPIRG’s Fossil Free UMD campaign collected statements written on sticky notes from students across the campus, listing reasons why they wanted the school to divest from fossil fuels, reduce its carbon footprint and take more concrete action against climate change.

When the group arrived at the Service Building, members placed the notes on the wall around its front entrance.

“We are standing here today to fight back against an administration that doesn’t recognize that clean energy is our future as young people,” she said. “As students and young people, we cannot take no for an answer.”

In October, the Student Government Association approved a resolution to allocate undergraduate students’ yearly sustainability fee toward offsetting commuter emissions, through funding projects such as capturing methane at landfills and planting trees.

This university has pledged to become carbon neutral by 2050. But in November, the SGA sent a letter urging them to push that deadline up 25 years. The letter came in response to an October report from the United Nations urging a stronger commitment to carbon neutrality,

Numerous other institutions, including the universities of Florida, Vermont and Montana, have accepted the 2025 goal.

Though this university has already successfully cut carbon emissions in half — which it accomplished three years before the goal’s deadline — Mark Stewart, the university’s sustainability manager, told The Diamondback in November that the 2025 deadline would be a challenge. Groups like the Sustainability Cooperative are still pushing for the university to meet it.

After the sticky notes were placed, Neve invited other students to speak about why they attended the rally and why they care about reducing the impacts of climate change. Jacob Mast, a senior environmental science and technology major, spoke about how Maryland’s Eastern Shore — where his family lives — is scheduled to be submerged underwater in his lifetime.

“That’s not just me, that’s all over the place,” said Mast, whose family owns farmland in the region. “It’s a literal, tangible robbery. This is a crime that’s being committed.”

The rally concluded after students placed all the sticky notes on the building. Before the ralliers disbanded, they sang a few lines from Neil Young’s “Mother Earth,” led by Amelia Avis, the SGA sustainability director.

“The last fossil-free event that we had on this campus was two years ago, and it had, like, a quarter of the people,” Avis said. “It’s never been something that’s really galvanized people on this campus, but … I know that everyone here really cares about this topic and is invested in making our planet greener and making UMD better.”