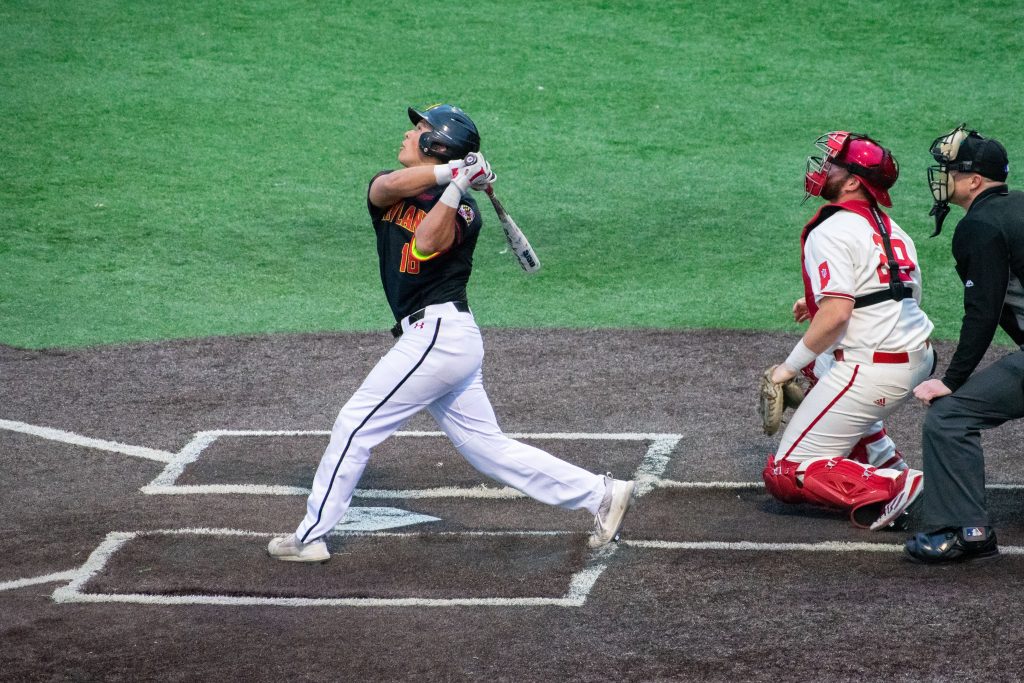 Down 2-0 in the ninth, though, the Terps had a chance to get back into the game and steal the rubber match. With just a handful of games left for Maryland to punch its ticket to the Big Ten tournament, conference wins — especially against a Golden Gophers squad also hovering near .500 — are becoming ever more vital.

And after right fielder Randy Bednar’s leadoff home run in the ninth cut the Terps’ deficit to one run, followed by third baseman Taylor Wright’s double and first baseman Maxwell Costes reaching on a hit-by-pitch, the team appeared to be in business with two on and no outs.

But in a series full of missed opportunities, back-to-back strikeouts and a groundout ended the threat and left Maryland just shy with a 2-1 series-ending loss.

Left fielder Michael Pineiro nearly put Maryland on the board in the second inning, but his deep fly ball was caught just short of the fence. And in the third inning, designated hitter Josh Maguire walked and took second on a wild pitch. Then, he attempted to steal third base on another low pitch, but catcher Eli Wilson corralled the pitch and threw Maguire out, ending the threat.

Center fielder Chris Alleyne got the Terps started in the sixth inning with a double, and second baseman Benjamin Cowles was plunked by right-hander Joshua Culliver. But on a ball in the dirt, Wilson fired to third to catch Alleyne attempting to advance, cutting down another chance for Maryland’s offense.

Despite uncorking three wild pitches, Culliver held the Terps off the board in 5 ⅔ innings, allowing two hits.

The Gophers missed a few opportunities to start the game as well, leaving runners in scoring position in each of the first three innings.

However, in the fourth inning, Minnesota capitalized on a double from third basemen Jack Wassel off left-hander Tyler Blohm, and a wild pitch and walk put runners on first and third before coach Rob Vaughn inserted right-hander Trevor LaBonte.

Right fielder Easton Bertrand hit a sacrifice fly to score the Gophers’ first run of the game, followed by an RBI single from center fielder Drew Hmielewski to go up 2-0.

LaBonte recovered at the end of the inning and went on to retire 13 batters in a row, giving Maryland a window back into the game.

Going into the 9th down two runs, Bednar’s leadoff solo shot against Gophers closer Brett Schulze narrowed the deficit. And Wright continued the Terps hot streak with a double, putting the tying run at second before Costes reached base when he was hit by a pitch.

Schulze, though, struck out Pineiro and catcher Justin Vought before forcing Maguire to ground out, leaving Maryland just short of a comeback and sitting in 10th place in the Big Ten ahead of next weekend’s final conference series against Iowa.