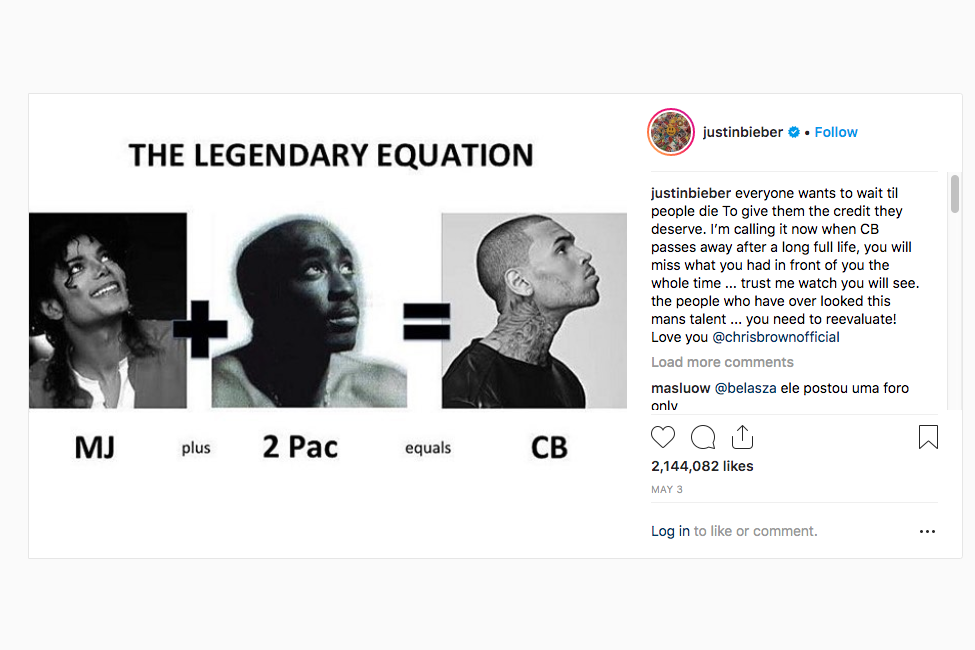 Justin Bieber posted this photo to Instagram on May 3, urging his followers to "reevaluate" their opinions on Chris Brown.

On May 3, Justin Bieber posted on Instagram, telling the public it needs to “reevaluate” Chris Brown as a talented individual. The post also insinuates that Brown, like Michael Jackson and Tupac Shakur, is a legendary musician and should be treated as such. The kicker? All three of the men featured in the post have serious abuse allegations against them.

In his original post, Bieber said people are overlooking Brown’s talent because of a “mistake he made.” Though he never explicitly says what mistake he’s referring to, it seems to me Bieber is talking about Brown’s alleged rape and domestic abuse.

When something like this reaches the pop culture media cycle, my brain asks a million questions about how this could happen. Does Bieber really believe Brown’s history of violence is merely a “mistake?” And if he does, did he not think this post would garner negative attention from his fans and the public? Does Bieber think people should forget Michael Jackson’s child molestation allegations and Tupac’s sexual abuse charges?

[Read more: The discrimination against Caster Semenya is a case of abuse]

And the most important question: Does being a music “legend” excuse illegal, dangerous and overall abusive behavior? This has been debated in the media time and time again.

In the rise of the #MeToo movement, I cannot overstate how extremely frustrating this is. All of the men I’ve named, including Bieber, have been brought to court for assault, sexual assault and/or abuse allegations, yet some people still refuse to believe they should be held accountable for these actions. Brown himself actually pleaded guilty to an assault charge against Rihanna in 2009. Technically, you can’t even call it an allegation — yet Bieber still stands by Brown.

Bieber’s post takes all of this a step further by insinuating that because Brown has made music that people enjoy, he should be exempt from dealing with the social implications of his actions. Other famous men came to Bieber’s and Brown’s defense, such as Nick Cannon and Sean Kingston, agreeing that Brown is worthy of being called “legendary.”

One of the things I find most difficult to cope with is the fact that Bieber, someone who rose to fame on the shoulders of tween girls, posted this at all. A huge portion of his fan base is still female, and this could negatively affect his younger following.

Many people commented on the post, letting Bieber know they disagreed, and some voiced their opinions about how domestic violence is no mistake. One account, @misssperu, commented, “Math is cool and all but the formula most people care about is: good person > good musician.”

This encapsulates exactly how I feel about the post. The bottom line is fame doesn’t make you better than the people you hurt. It’s simply impossible to separate the musician from the abuser because they are one whole person. Everyone is the sum of their parts, and if part of a famous person does something as terrible as these men have, that becomes a part of their whole. You can’t let their music overshadow the fact that they are shitty people.