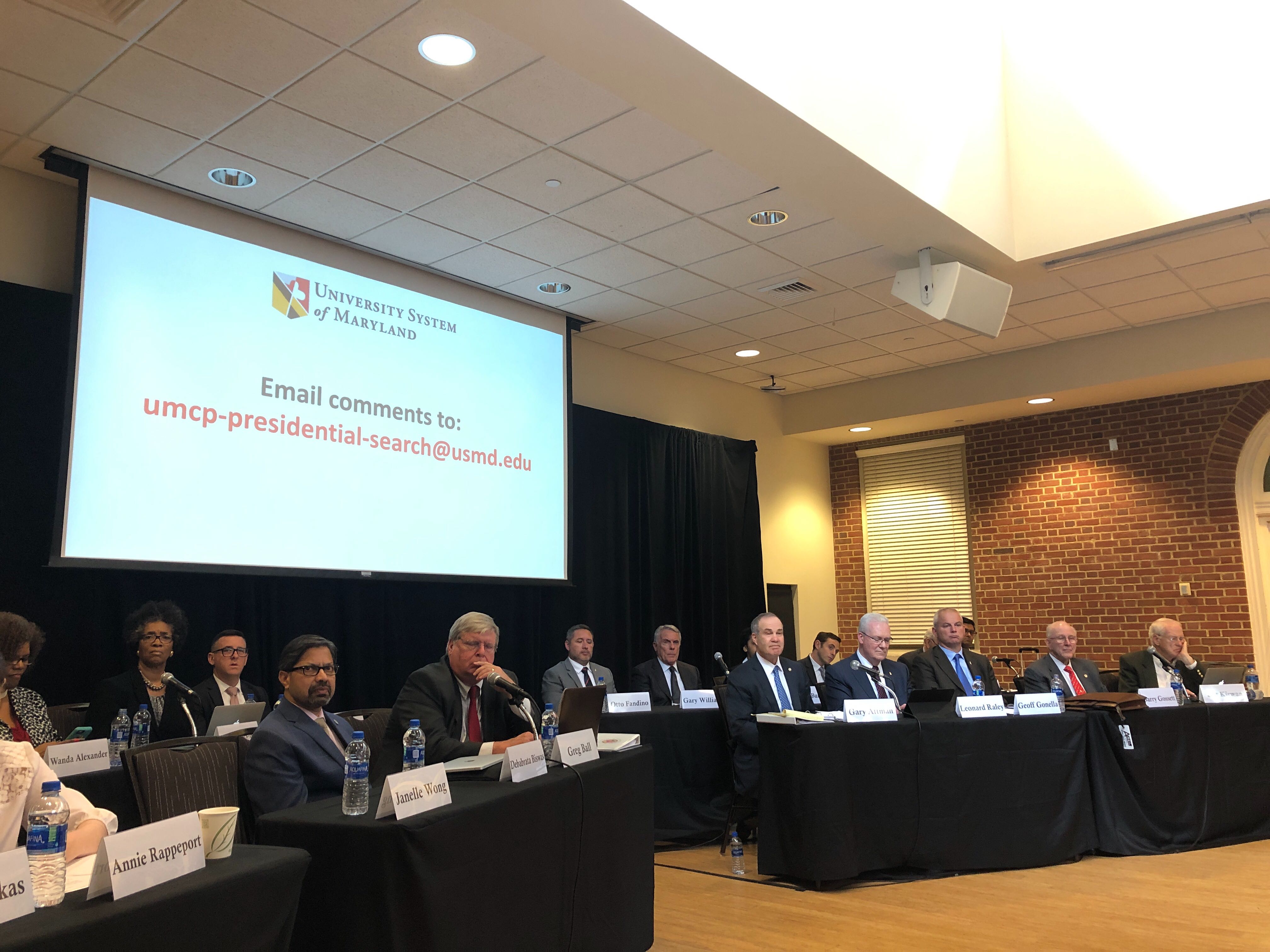 Members of the search committee tasked with finding the University of Maryland's next president held a forum with community members in Stamp Student Union on Wednesday, May 8, 2019. (Maria Trovato/For The Diamondback)

Members of the University of Maryland community expressed concerns about diversity to the committee searching for the university’s next president Wednesday.

About 45 people attended the forum in Stamp Student Union. The event aimed to give members of the presidential search committee — tasked with choosing university President Wallace Loh’s replacement before his scheduled June 2020 retirement — an opportunity to receive comments on the process.

“We are not here to respond today,” said Gary Attman, a regent of the University System of Maryland and the committee’s chair. “We are here to listen and hear your feedback.”

Twenty-one people spoke at the forum, many of them highlighting the importance of minority representation in the search.

Nana Brantuo, an education college doctoral candidate and Office of Diversity and Inclusion graduate assistant, noted 10 of the committee’s 20 members are white men.

“I just want to know how important it is to you all to have a president that is deeply invested in also taking action as related to diversity, equity, and inclusion,” she said.

Attman, who initially said the committee would not be answering questions, responded to her — pointing out the number of women on the committee, eight out of a total of 20 members.

Taylor Green, a junior community health major who ran unsuccessfully for student body president on a platform centered around minority representation, took issue with the fact that only two students were chosen to serve on the search committee.

“You would assume we would have more seats around this table,” she said. “I’m uncomfortable with people who haven’t been here — who don’t know what’s happening — being in charge of who’s going to be the new president.”

Attman told Green the committee was formed “after input from a variety of groups.”

“We have a good committee here,” he said. “You’ll judge us by our results, hopefully.”

The group’s top priority would be to find someone who is committed to the university’s academics, Attman said.

But Joann Prosser, the Department of Resident Life’s assessment and research director, told the committee to look for a president who will consider more than just academics — someone who understands “how to educate a whole person [and] a good citizen.”

Prosser pointed out that black student enrollment on the campus has been declining. This year’s freshman class was just over 7 percent black — about a 30 percent decrease from last year, and the lowest number the school has seen since this university’s Institutional Research, Planning and Assessment office began compiling data in 1992.

“I’m frustrated that there isn’t more of an outcry from this campus on all different levels,” Prosser said. “We need resources and a commitment from the top-down to the bottom-up to really address these things holistically.”

Loh said in October that he’d retire at the end of this academic year, following separate investigations into the circumstances surrounding the death of football player Jordan McNair and another into the football program’s culture. An outside committee determined the program was abusive, which was partially enabled by administrative oversight. But in January, Loh said he’d stay on another year — drawing criticism from many students.

Danielle Koonce, a doctoral student in the sociology department, said the committee should consider choosing a woman to take over Loh’s role — ideally a black woman. She said that could help heal the “disconnect” between this university and surrounding Prince George’s County, which is 65 percent black, according to the U.S. Census Bureau.

“I think it would really help to bridge that relationship,” she said. “I think a great way to speak to that is to not just talk, but put your money when your mouth is.”

Christopher Lester, director of the Office of Multi-Ethnic Student Education, and Shige Sakurai, associate director of the LGBT Equity Center, echoed other speakers’ concerns. Lester said he wants the committee to choose a president who has “demonstrable accomplishments” in diversity, while Sakurai stressed the importance of gender inclusivity in the search.

Some speakers also said there is a need for a greater focus on the humanities. Koonce said that while focusing on STEM may bring in more money, it’s important for students to learn how to be “great humans” through humanities.

There will likely be more forums in the future and a website where people can express their concerns, committee members told attendees.

“We’re listening,” Attman said. “We’ve got some very good takeaways here and we will be building them into the search program.”