UMD President Loh says funding, tuition will be major issues for his successor 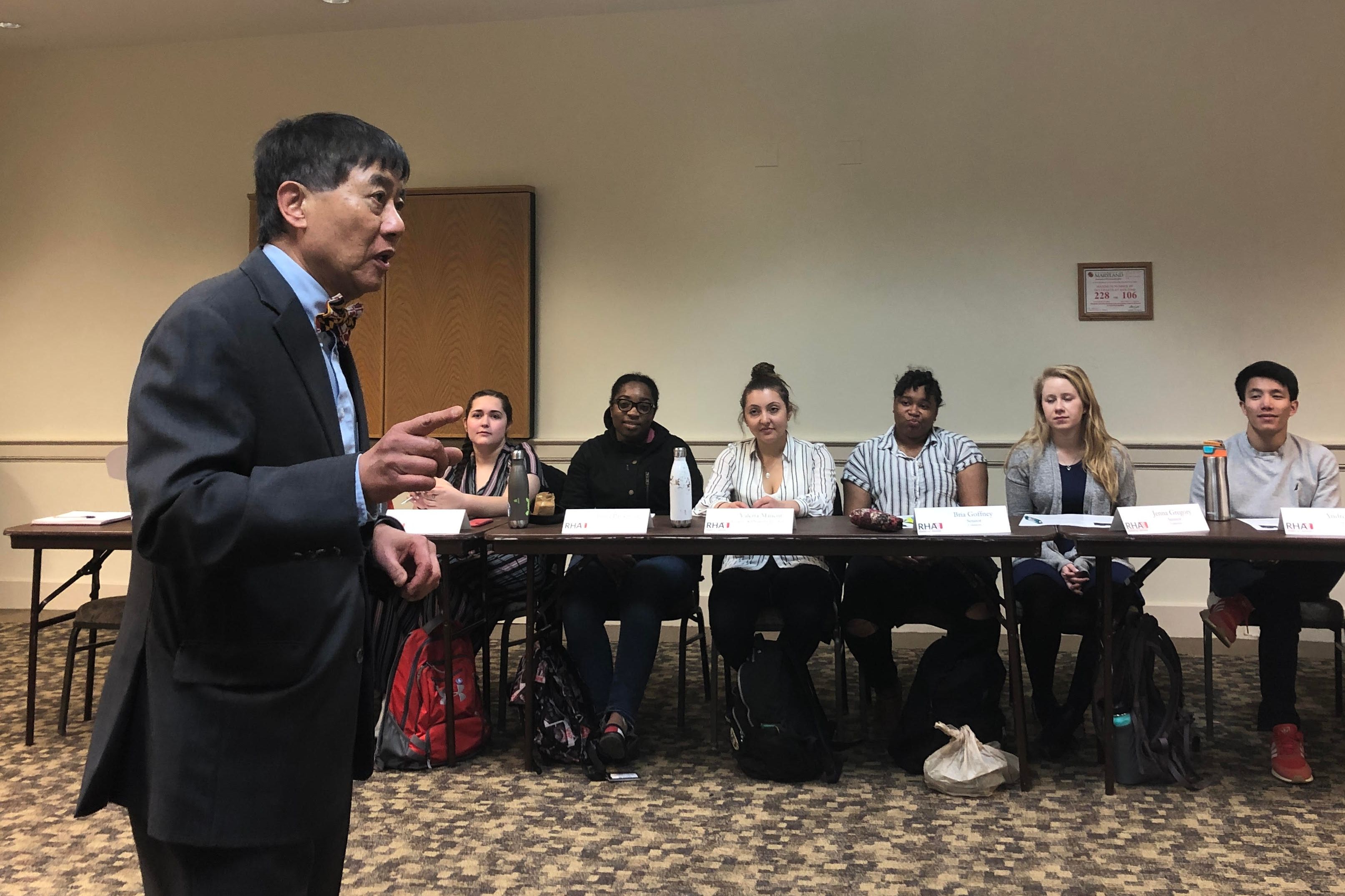 University of Maryland President Wallace Loh expects funding to be one of the main issues his successor will face.

At the Residence Hall Association’s Tuesday meeting, Loh said tuition has increased because of a decline in state funding. This could prove to be a challenge for the next president, he said, as they would have to decide whether to take the unpopular stance of advocating to raise tuition further.

“For every dollar that the state does not fund us, we have to raise our own revenue,” Loh said.

After speaking for more than an hour, responding to questions from senators ranging from misconceptions about being president to his goals before he retires instead of giving a formal address, Loh identified funding, tuition and community engagement as major issues the next president would face.

He defended his decision to implement differential tuition — when students are charged additional fees for majors in high demand, such as engineering, business and computer science — and said that the university should continue to implement it.

Explaining why he initially decided to implement differentiated tuition, Loh said he saw it as a “moral issue.”

“People in fields that are reported to not make as much income are basically subsidizing people in computer science or engineering,” he said.

Loh said he receives between 300 and 400 letters from parents of students rejected from this university every year. They tell him they would be willing to pay higher tuition because, if their children are not admitted, they would have to attend an out-of-state school, and pay tuition that’s even higher, he said.

Before he leaves his role in June 2020 — a year later than he originally planned — Loh said he wants to engage the university further with Prince George’s County. Though the university has worked cohesively with the county, such as when College Park Academy was established in 2013, they could share more initiatives, he said.

Loh recalled meeting with a parent of a student who attended the charter school and asking the father why he sent his child there, even though they lived far away. The parent said they did so because of the school’s connection to this university.

“This is what makes my job satisfying — to make that kind of a difference in a community and build a pipeline for students,” Loh said.

To engage more with the community, the campus needs to be more accessible through better public transit — a feat that will be accomplished when the Purple Line, a 16-mile light rail through the university’s campus, is complete, Loh said.

Senator Calvin Burns, a sophomore civil engineering major, said he learned a lot about tuition and the way the university is run more from Loh’s speech.

“He’s gone through kind of a lot of the mud this past year,” Burns said. “I think this was a great opportunity for him to, in an informal sense, almost defend his character.”

After reports came out at the end of last summer that described a “toxic” culture in the school’s football program, university community members asked for Loh’s resignation. Later — following findings that the program’s culture was abusive and enabled by a lack of oversight — 24 student groups rallied in an event called “Fire the Liars,” calling for him to commit to his retirement.

RHA vice president Ben Reichard, a senior government and politics major, said it was “pretty interesting” to hear Loh’s thoughts on the future of tuition.

“We can sit here and complain all the time about [how] it’s so expensive to be a student and tuition is too dang high and stuff, but that’s like an actual administrator’s take on it, saying ‘we know this is a problem but here are the conditions that we operate under,’” Reichard said.