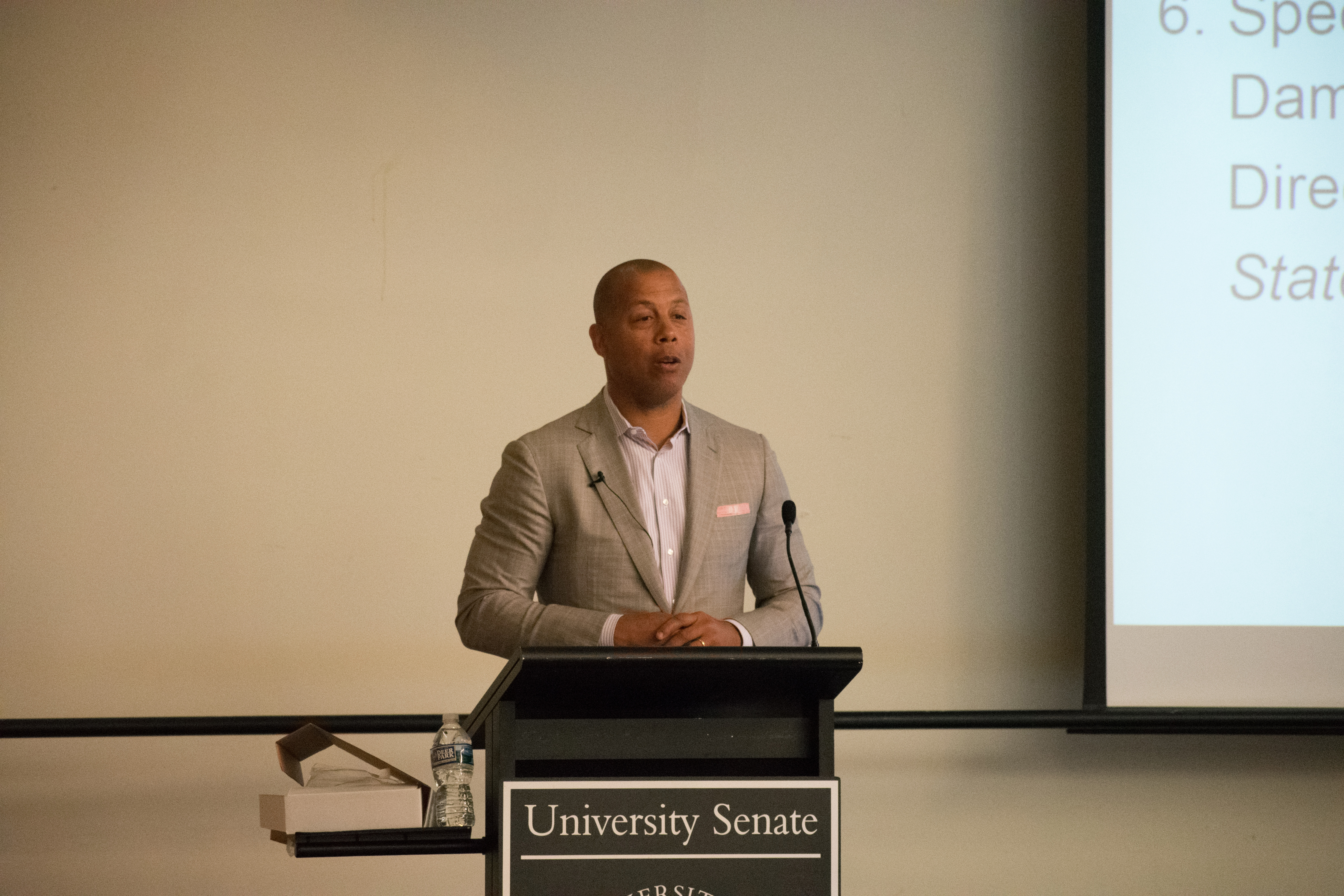 Damon Evans, the university's athletic director, at the May 7 University Senate meeting.

In its last meeting of the academic year, the University of Maryland Senate discussed the university’s actions in the wake of Jordan McNair’s death.

At the Tuesday meeting, athletic director Damon Evans spoke to the governing body about how the athletic department has responded to McNair’s death, and provided updates on how it will protect future students from similar incidents.

McNair, an offensive lineman on the university’s football team, died two weeks after suffering heatstroke at a team workout in May 2018. An external review of the incident later detailed that athletic trainers did not provide adequate care for McNair after the onset of his symptoms.

In his presentation, Evans highlighted athletes’ academic success, touched on the health and well-being of players and broadly addressed reforms following two investigations — one into McNair’s death, and the other into the football program’s culture.

Evans said considering athletes’ feedback has been a priority over the past year.

“The department is creating mechanisms for student athletes to voice their concerns and increase accountability of leadership,” he said.

Evans said these reporting venues include an online platform where students can submit feedback anonymously and, in real-time, a group that includes officials from outside the athletic department will review student feedback. An ombudsman will be selected soon to help address these issues, Evans added.

“Student athletes’ voices must be heard … they are the ones in the trenches, and we have to make sure we are doing right by them,” he said.

In March, Evans said that no player had used Terps Feedback, the online portal providing an anonymous venue for athletes to report their concerns.

And despite the department’s efforts, some senators said the continued presence of mandatory athletic fees make them feel ignored by the university.

“Is there a commitment on the part of the athletic department to phase out athletic fees, as many schools in the Big Ten have done the same, and if not, why not?” asked physics professor Tom Cohen.

Evans responded that the department has a “commitment to work with the institution to assess where we are with our fees,” and noted the department has not increased the fee for the past 4 or 5 years. He did not identify any efforts to eliminate the athletic fee.

Aside from fees and increasing student voices, Evans neglected to provide specifics on any other reforms, which disappointed some attendees.

Read More: [Less than half of UMD student senators have attended meetings this year]

“[Last year] he basically came to the SGA meeting … and said the same thing,” said Sasha Kahn, a junior architecture and government and politics major.

Instead, the athletic department compiled a presentation and attached it to senate agenda materials. The documents addressed 41 recommendations from the two investigations, and gave updates on which are completed and which are still ongoing. While most of the recommendations have been fulfilled, other efforts have not yet fully been implemented, such as adopting NCAA best practices for independent medical care or establishing a “functional model” for staffing and training physical therapists and athletic trainers.

More broadly, Evans commented on how the department plans to honor McNair’s legacy.

“We are committed to honoring his life by making sure something like this never happens again by implementing all the recommendations from the external safety review,” Evans said.

Outgoing senate chair Chris Walsh said the body heard “pain and outrage” at their two special sessions in November 2018 in response to McNair’s death — and that, much like the athletic department, the incident informed many of their actions this year.

“Our first and foremost concern [this year] was responding to the unfortunate loss of Jordan McNair,” Walsh said.

Christophe Beaumier, a newly-elected senator and public policy master’s student, said he looks forward to what the senate may accomplish in the next year.

Despite tense discussion following the athletic department’s presentation, he said he’s optimistic the body can begin to recover next semester.

“I hope that next year there’s more healing than just anger,” Beaumier said.