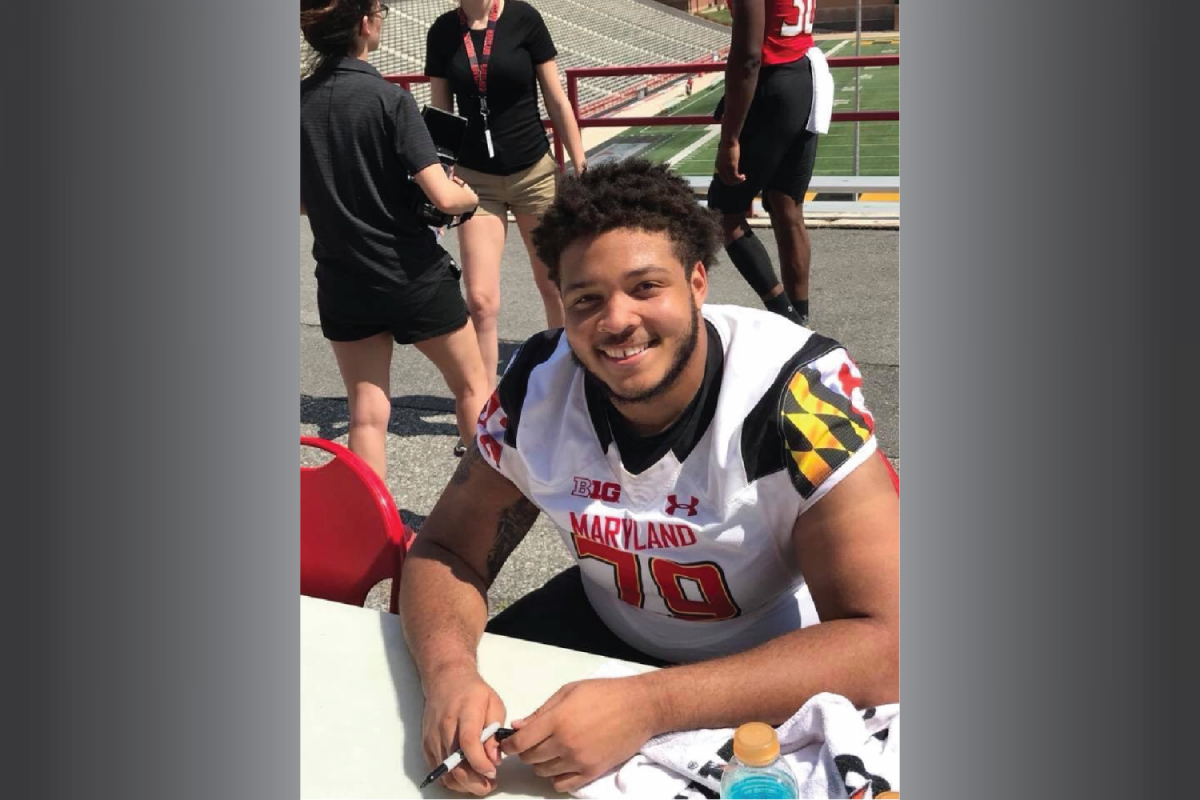 At a Maryland football team workout May 29, offensive lineman Jordan McNair suffered heatstroke, didn’t receive proper treatment from training staff and was taken to the hospital, where he died 15 days later.

The university quickly hired Rod Walters, a sports medicine consultant, to investigate the athletic department’s safety protocols. As Walters worked on his report in the months following McNair’s death, details of the workout and the medical treatment remained cloudy and disputed.

After briefing the University System of Maryland Board of Regents on his findings Sept. 21, Walters released his report to the public. The following is the account of the May 29 workout that Walters put together by conducting interviews, watching video and reviewing records.

Throughout the timeline, analysis and context is provided by Diamondback sports editor James Crabtree-Hannigan. Bullet points accompany events that Walters did not identify with an exact time. Some are known to have occurred between two times and are organized as such, while others are located where they are relevant.

This timeline will be updated if more information becomes available.

4:13 p.m. — Maryland’s first team workout of the summer begins. This follows four weeks off, during which the team assigned players a regular training regimen.

• The workout was moved from Maryland Stadium to the practice fields located behind the Varsity Team House due to construction, and Cole Field House — the second choice — not having adequate field space available.

Analysis: It’s not clear exactly when the workout was moved, but the training staff reported it had to rush to prepare the practice fields with proper medical equipment. Tubs capable of cold water immersion are reportedly part of the usual field setup but were not at the practice fields on May 29. Walters and head football athletic trainer Wes Robinson point to this as a mistake.

4:38 p.m. — Players line up to begin a conditioning test of 10 110-yard sprints. They are expected to complete each sprint within a certain time based on their position; linemen must run each sprint in 19 seconds.

Analysis: Fatal heatstroke among football players most commonly occurs when teams first return to practice. To lessen the risk of heatstroke, teams are advised to gradually increase the intensity of practices. While this conditioning test was “not long in duration,” Walters said the team not allowing for acclimatization, or administering an initial fitness test following its time off, was a concern.

Analysis: The weather this afternoon was about 80 degrees with relatively clear skies and about 70 percent humidity. Those conditions just meet the threshold where teams should consider making practice modifications due to increased risk of heat illness, according to the Korey Stinger Institute, a nonprofit dedicated to preventing sudden death in sport. The university was not recording the wet bulb globe temperature, which experts say most completely measures conditions relevant to heat illness. At Walters’ recommendation, the university has begun using that measurement.

4:48 p.m. — Following the seventh sprint, McNair has heat cramps, and trainers report he appears “exhausted.” A player describes him as “gassed.”

Analysis: In the Walters report, Robinson recommended the team alter several policies surrounding conditioning tests. The changes include having players sit out a sprint if they failed to make time on the previous one, and having players run the width of the field rather than the length to allow for easier monitoring by athletic trainers.

4:53-4:58 p.m. — McNair completes the final three sprints in more than 19 seconds, and particularly struggles on the final one. Teammates go back to McNair and encourage him on the 10th sprint, and one player reports McNair walked with his arms around teammates.

Analysis: At a press conference June 14, the day after McNair’s death, athletic director Damon Evans said McNair completed the conditioning test and only had problems recovering subsequent to it. In a statement Tuesday, Evans confirmed Walters’ finding that university administration initially received false information about the May 29 workout. Neither Evans nor Walters specified who gave the information, but according to The Washington Post, coach DJ Durkin, who was at the workout, maintained that McNair completed the conditioning test in an interview at Big Ten Media Day on July 24.

4:59 p.m. — McNair is assisted by athletic trainers Billy Rodgers and Scott Wood, who cool and hydrate him.

Analysis: The proper treatment for heat exhaustion — a less severe heat illness than heatstroke — involves getting the patient to a cool, shaded environment and recording vital signs. Maryland trainers never took McNair’s temperature or other vital signs and did not move him indoors until 34 minutes after he first appeared to be cramping.

About 5 p.m. — As Robinson retrieves an inhaler for another player, he sees Rodgers and Wood helping McNair and yells across the field, saying to keep him moving. One player quotes Robinson as saying “get him the fuck up,” while another recalls him saying “drag his ass across the field.”

• As Robinson walks with other players toward grass fields where they will do positional drills, director of athletic training Steve Nordwall approaches McNair.

• Rodgers and Wood walk McNair toward the positional drill area, and Robinson tends to a linebacker who complained of dizziness.

• McNair complains of lower back tightness and cramping. Wood and Rodgers notice him hyperventilating but later tell Walters they did not notice any elevated skin temperature. After initially having McNair walk around, they lay him on a treatment table with his legs elevated.

5:22 p.m. — Nordwall, Rodgers and Wood cart McNair to Gossett Team House. Seeing this, Robinson uses his cell phone to call one of the trainers and is told McNair is improving.

Analysis: Robinson has since recommended athletic trainers use radios to improve communication.

5:26 p.m. — The cart carrying McNair arrives at Gossett. McNair walks into the building reporting primarily lower back cramps and “being uncomfortable.” With the team workout over, Robinson “runs down” to Gossett.

• At some point after trainers begin tending to him, McNair says he didn’t eat the lunch provided by the team and had only a bowl of cereal in the morning. The gallon of water that the team provided to McNair was later found in his locker, unopened.

• The trainers again lay McNair supine with his legs elevated. Robinson tells Wood and Rodgers to use cold towels to cool him and alleviate cramping.

• Robinson said the trainers did not initiate cold water immersion — the recommended treatment for heatstroke that has a 100 percent survival rate when instituted quickly — due to a fear McNair would drown, given McNair’s comparatively large stature.

Analysis: There were five athletic trainers, multiple coaches and student managers and dozens of McNair’s teammates at the workout.

• Still uncomfortable, McNair gets up on his own and begins walking around to help with his back pain before again sitting on a treatment table. Nordwall later denies to Walters having noticed McNair having hot skin.

5:50 p.m. — As trainers hydrate McNair and use towels and ice packs to cool him, he begins yelling at them.

Analysis: The emergency action plans list Nordwall and a team physician as people to notify in case of a medical emergency, but first says to “immediately” contact EMS. Neither Nordwall nor Cothran responded to The Diamondback’s requests for comment.

5:55 p.m. — Nordwall calls 911 and reports only that McNair is “hyperventilating after exercising and unable to control [his] breath.” He tells the dispatcher that they will meet the first responders “on the Fieldhouse Drive side of the field.”

Analysis: Nordwall first asks the dispatcher for “one second” and does not resume talking until about 15 seconds into his call. He never mentions any cooling efforts or potential of heat illness.

• McNair has a seizure. He is foaming at the mouth with his jaw clenched. The trainers position him on his side and Robinson begins using a manual suction device to help McNair breathe. The suction device came from a trauma bag that a third athletic trainer had retrieved from the practice field.

Analysis: Previous media reports suggested McNair suffered a seizure around 5 p.m., but Walters found no evidence of that, despite asking assistant coaches about seizures and whether they witnessed McNair suffer one on this day.

Analysis: Gossett not containing equipment such as manual suction and oxygen — meaning a trainer had to leave and collect them — was one of the concerns Walters voiced to university administration in late July as part of an update on preliminary findings.

• Robinson asks Nordwall if anyone has left Gossett to meet the ambulance. When Nordwall says no, Robinson goes himself. He doesn’t see them and by the time he returns to Gossett, the ambulance has arrived via a different entrance and first responders have reached McNair.

Analysis: Sending someone to meet EMS and direct them to the precise location is listed on Maryland’s emergency action plan. Walters calls this step “imperative,” and not following it added to the chaos of the scene.

• McNair is stretchered outside to the ambulance as the trainers continue applying ice packs to his groin and armpit, which is an alternative treatment method suggested to be used when cold water immersion isn’t possible.

6:06 p.m. — One of the first responders reports McNair’s seizure to the dispatcher and calls for paramedics, which are separate from ambulances in Prince George’s County and are dispatched for more serious medical emergencies.

Analysis: It is unclear whether Robinson’s call was effective in getting ACLS dispatched or if an ACLS ambulance was not dispatched until this time.

6:11 p.m. — The ACLS ambulance drives to the other side of Gossett to meet the first ambulance.

Analysis: Walters said the confusion over the arrival locations of the ambulances was caused not only by the failure to send anybody to meet them, but also the traffic changes caused by Cole Field House construction and the university’s failure to adjust its emergency plans in response to it.

• Robinson brings an office garbage can filled with ice to the ambulances.

• McNair is transferred to the ACLS ambulance. They secure an IV line while Robinson and Nordwall continue to help with cooling.

Analysis: McNair did not receive cold water immersion until at least this time. Cold water immersion has a 100 percent success rate in preventing fatalities from heatstroke when instituted within 10 minutes of collapse, and the Korey Stringer Institute says to begin cooling “within 30 minutes.”

Because trainers failed to measure or record McNair’s temperature, we cannot know exactly when he began suffering from heatstroke; however, his mood swing and seizure between 5:50 p.m. and 6 p.m. indicate that heatstroke had likely set in by then or was in the process of setting in. That means by the time he arrived at the hospital, the 10-minute window was closed and the 30-minute window was — at the least — very nearly closed.