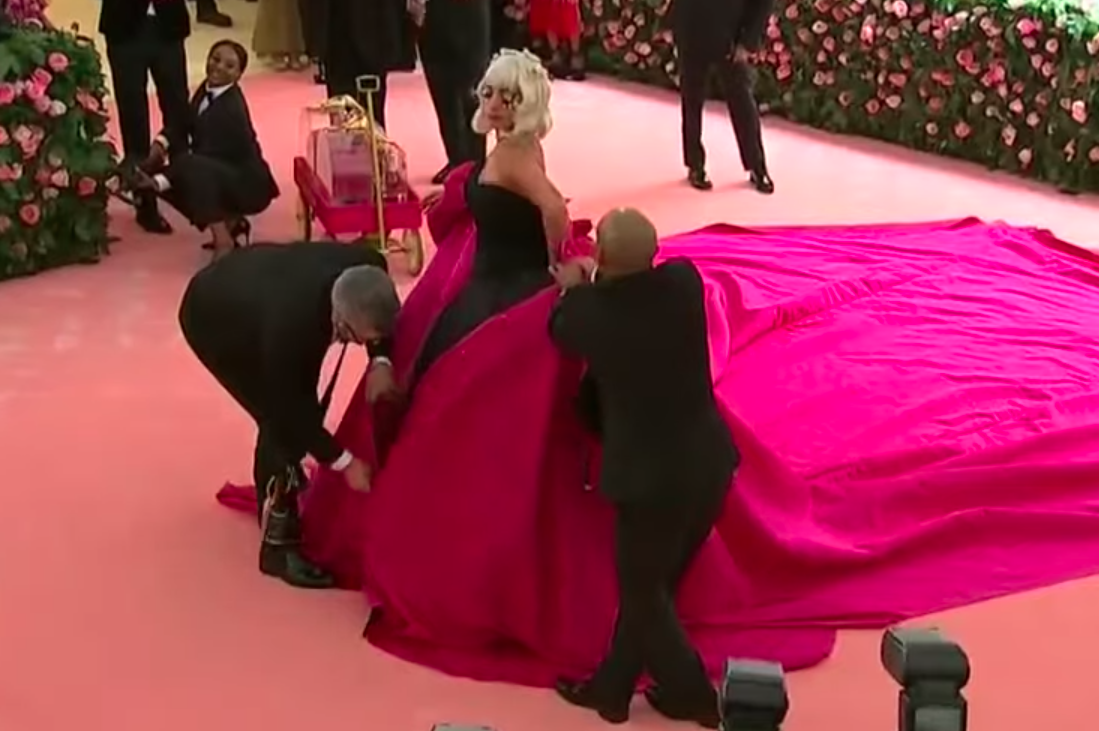 Lady Gaga steps out of her pink ballgown revealing a smaller, black ballgown underneath at the 2019 Met Gala in New York (Photo via YouTube).

After years of carrying the Met Gala on her shoulders by flawlessly adhering to the theme, Rihanna sat this year’s out. I was worried that in her absence, there wouldn’t be anyone left to dazzle me. But thankfully, most attendees showed up on the red carpet with their over-the-top and incredibly camp looks.

Camp is essentially an art form that is extravagant, imaginative and flamboyant because of its unconventional — and sometimes awful — taste. It takes what is normal and makes it look artificial; what is serious becomes ridiculously entertaining.

As expected, Lady Gaga stole the show early Monday evening, stripping through four different looks — all designed by Brandon Maxwell. Dressed in a giant hot pink ballgown with a 25-foot-long train, obnoxiously spacious balloon sleeves and an equally obnoxious hair bow, Gaga stepped onto the red carpet before being unzipped by her designer to reveal two more looks, ultimately ending her performance in just a sparkly bra, underwear and heels.

[Read more: The Met Gala is in three days — and it’s gonna be campy]

I did not expect Lupita Nyong’o to embody camp as well as she did, but the Kenyan-Mexican actress arrived in a beautiful Versace gown with a multi-colored neon structural cape to match. As extraordinary as it was, the most notable part of her attire was actually her hair. Styled as a tall afro and adorned with gold Black Power-fist hair picks, her hair was reminiscent of Lauren Kelly, as well as Marie Antoinette, to show the beauty, power, versatility and luxury of black hair.

One of my favorite outfits was that of Hamish Bowles, the current international editor-at-large for Vogue magazine. In a custom-made Maison Margiela cape and culotte pantsuit, Bowles snatched my edges. The vibrant purple cape was a gorgeous example of camp at play.

Ciara’s custom Peter Dundas emerald gown and long afro with jeweled clips was reminiscent of the “You’ve Got to Be Seen Green!” scene from the movie The Wiz, which is essentially the epitome of camp style. From the costumes to the music and the sets, every aspect of that film was extraordinarily flamboyant — as was Ciara’s getup.

Speaking of extraordinary things, Cardi B showed up and showed out in a ruby red, feather-lined, layered gown designer Thom Browne, which Vogue reported took 35 people and 2,000 hours to create. With a ruby-encrusted headpiece and a 3-meter-long train, Cardi B’s look takes its rightful place as one of my favorites of the night

This review would be incomplete if I didn’t mention the most extravagant entrance of the night. Billy Porter arrived in an ensemble reminiscent of ancient Egyptian pharaohs — lifted on a litter, he showed off his interpretation of camp fashion in a golden catsuit and winged cape look featuring over a million beads, crystals and chains, according to Vogue. In an exclusive interview with the magazine, Porter revealed that the ensemble was actually inspired by Diana Ross’ ancient Egypt look, with nods to Elizabeth Taylor’s Cleopatra and Cher’s famous Bob Mackie-designed costumes.

Other stars that dressed exceptionally well and in accordance with the theme include Danai Gurira, Tracee Ellis Ross, Harry Styles, Kendall Jenner, Jared Leto, Dua Lipa and Lena Waithe. Despite my overall satisfaction, I couldn’t help but think that some attendees — such as Kim Kardashian, Hailey Baldwin, James Charles, Frank Ocean and Gisele Bündchen — played it way too safe.

But considering my concern that this year’s theme would be misinterpreted — or not interpreted at all — I was quite pleased with the looks served on the red carpet.