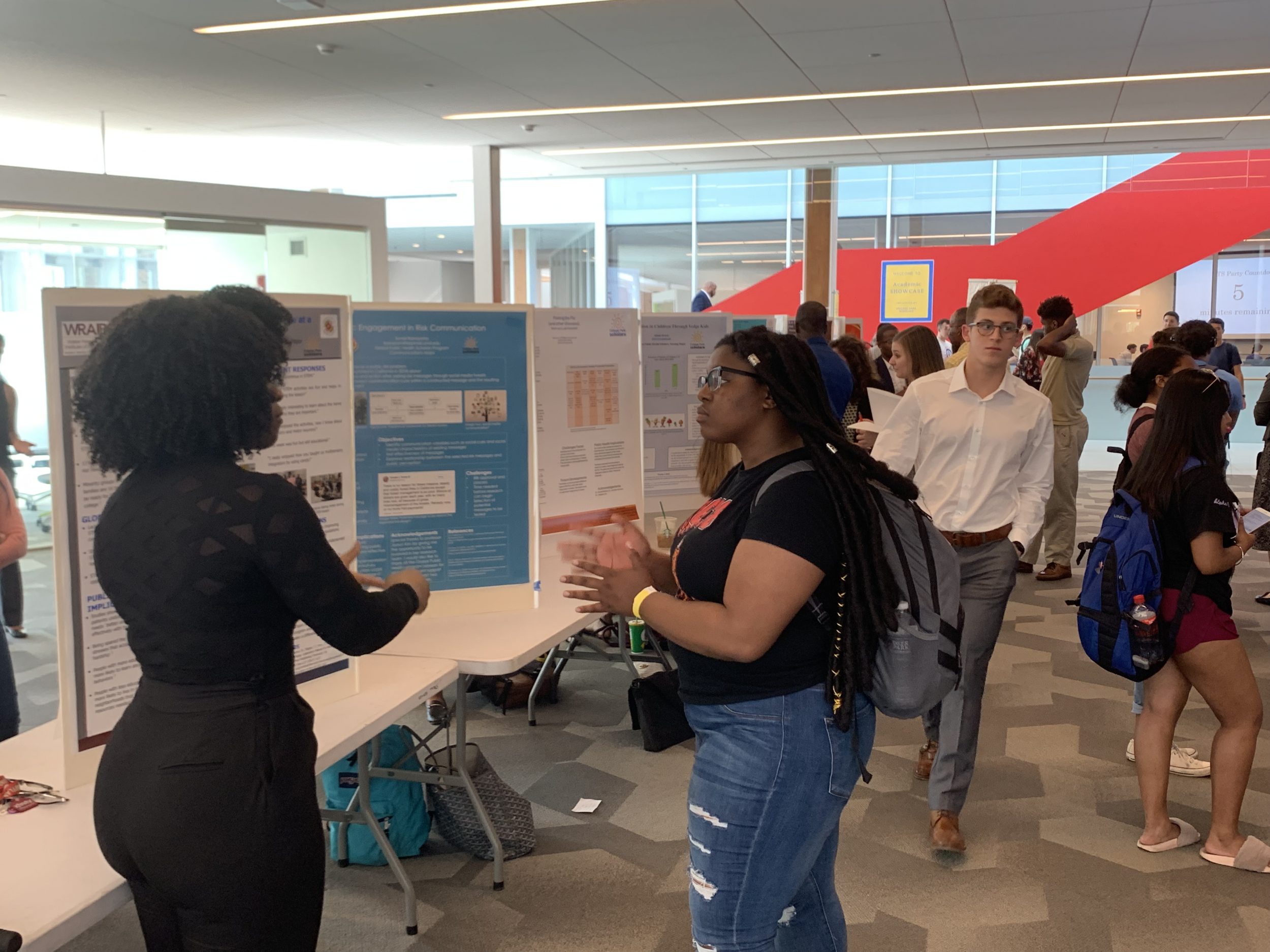 A College Park Scholar shares her research at the annual academic showcase, which was held May 3, 2019 at the Edward St. John Learning and Teaching Center. (Ryan Wu/For The Diamondback)

By Ryan Wu
For The Diamondback

More than 600 sophomores in College Park Scholars showcased their work Friday as part of the program’s annual academic showcase.

The event, held at the Edward St. John Learning and Teaching Center, is an annual display of research projects exploring various topics from the 12 Scholars programs — such as Life Sciences, Global Public Health and International Studies — by students in the living-learning community.

In her opening remarks, Marilee Lindemann, executive director of the program, said the showcase event allows students to share their research not only with instructors and peers, but the campus community as well.

“In Scholars, we truly believe we learn better when we learn together, and we recognize we don’t really understand something until we try to teach it to someone else,” Lindemann said.

[Read more: Criticized for its STEM focus, this UMD honors program will shift toward humanities]

Samantha Falco, one of the event’s select presenters, had a project that maximized the swath of an underwater laser scanner, which can be used to locate objects.

Falco, a sophomore electrical engineering major, said by modifying the design of a polygon module, she was able to improve the angles of scanning.

“I got to follow a project through the whole engineering design process, which gave me a lot of confidence to solve problems and think critically,” Falco said.

Outside the lecture hall, Chernor Jalloh shared what he learned during his internship at Stallion Technology, an Upper Marlboro-based company that sells revamped servers, networking equipment and information technology services.

Jalloh said he was able to better understand how the growing amount of electronic waste is harmful to the environment. He said he liked processing and selling refurbished goods, and his computer science background helped him maintain the company’s website.

“It was good for me to experience and see how somebody works on the inside and what they do day-to-day,” Jalloh said.

Crowell’s research looked at how the planned withdrawal of the United Kingdom from the European Union affects its economy, diplomacy and cultural influence. In her research, she found that Brexit could have negative short- and long-term impacts, including decreased investments, less trade volume, Scottish independence and increased tensions on the Irish border.

“This [project] really helps me understand how each country affects the entire world. It affects America so much yet so many people aren’t paying attention to it,” she added.

Dave Eubanks, the associate director of College Park Scholars, said one of the reasons they invited sophomore students to present their research was to help first-year students in the program learn from their peers and better plan their own work.

“We invited the whole campus to the showcase, so you can see people from the dean’s offices here, the faculties, the mentors in the building,” Eubanks said.

Matthew Mathai, a freshman physiology and neurobiology major, said he came to watch the showcase because he’s presenting his own research next year, and wanted to get a sense of what he’ll be doing.

Mathai said he was impressed by the presenters self-motivation to hold internships and present their findings.

“It’s just not something you usually see with sophomores,” Mathai said. “I thought they were very professional and I really enjoyed it.”

Jonathan Cyriac, a sophomore computer science major, said he enjoyed seeing what others are studying. He said the showcase helped him prepare for a potential bioinformatics career because many of the projects were about biology, chemistry and medicine.

“It really opened my eyes in terms of what I can do,” Cyriac said. “Even with a computer science degree I can try to explore my options in biology and branch out.”