Criticized for its STEM focus, this UMD honors program will shift toward humanities 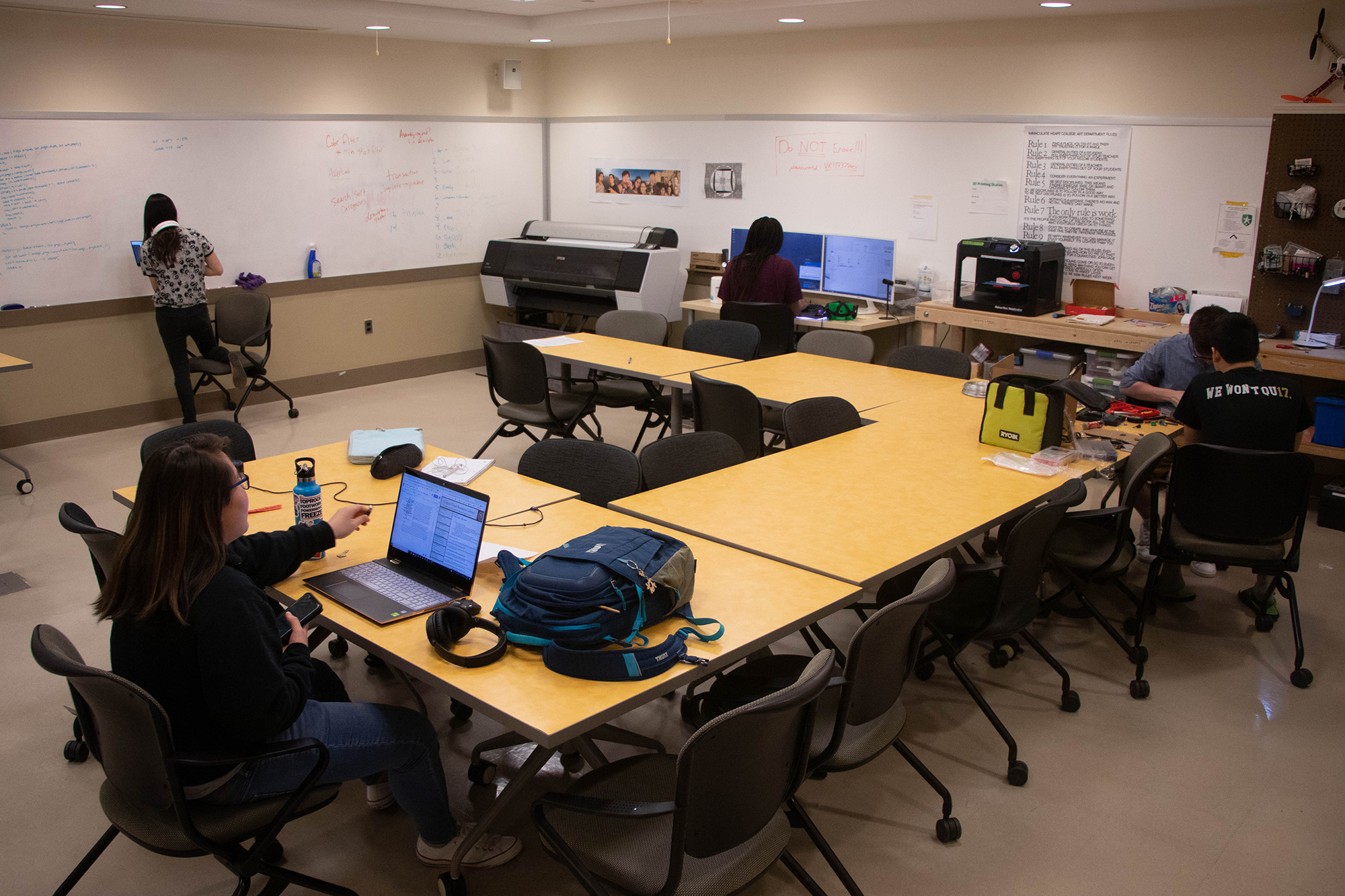 Students work in the DCC lab, which is located in Prince Frederick Hall. (Julia Nikhinson/The Diamondback)

Miranda Donovan entered the Design Cultures and Creativity living and learning program this year as a freshman at the University of Maryland, hoping to exercise her sense of creativity and design. Instead, she was assigned a project to repair a broken phone.

“I had never done something like that before,” the architecture major said. “I remember feeling so lost because there was no guidance, because it was already assumed that you knew what you were doing.”

DCC is advertised as a program that’s grounded in the humanities, but Donovan and other students say its curriculum seems geared primarily toward those with STEM and digital interests. Program director Jason Farman said DCC has responded to this critique by putting a greater emphasis on design.

To do so, DCC is adding a course intended to prompt students to think about how to integrate design into their capstone projects. This will complement the changes made to the capstone project in the wake of the program name change — after 2014, Farman said students have no longer had to design their project to have a digital component.

“Now, students have a lot more freedom in terms of the kind of tools that they use to build their capstone projects,” Farman said, “and sometimes it just doesn’t really touch digital media at all, but they are interrogating concepts of design and their impact on society in pretty broad ways.”

Farman added that the program is also hiring a new associate director in the fall of next semester to help with the transition.

The program revamp will come as the honors college undergoes a broader transformation. Starting next fall, only University Honors students will be able to take honors seminars.

With that shift on the way, Farman updated DCC’s curriculum, eliminating the requirement for students to take honors seminars to earn their citation starting this fall.

And with an upsurge of applications from the incoming freshman class — the program had to turn away more than 100 applicants after typically doing so for about 30 — Farman said DCC has the chance to adapt and attract students with a variety of interests and majors. Next year’s class is one of the most diverse the program has ever had, he said.

“We had so much interest in the program, it allowed us to shape the program in very specific and precise ways, and to say, ‘What do we want the cohort that’s coming in this fall to look like? What are the things that we value?’ And diversity is one of those things,” Farman said. “Not only racially and culturally, and thinking about inclusivity in terms of gender and sexuality, but also thinking about areas of study and interest, and skill sets.”

Donovan was pleased to hear about the direction the program is heading in. She chose the program thinking it would draw people from a variety of fields and interests, and she said she’s been disappointed by a lack of diversity in majors..

She expressed hope that as the program draws more interest, it will allow the admissions process to “be more selective with the diversity of majors they’re admitting.”

This would “make sure that there’s a nice balance between humanities and STEM within the program, since the program is supposedly humanities based,” she said.

DCC students pursuing STEM degrees, such as Samantha Tang, also said they would welcome more diversity within the program in terms of majors.

“People having different opinions than you or different ideas than you, or just even different backgrounds on how they think — whether they’re art-based or STEM-based — helps you think of problems and situations in a whole different way that you’re used to,” said Tang, a DCC student council member. “A lot of collaborative innovation is where the most revolutionary technologies come from.”