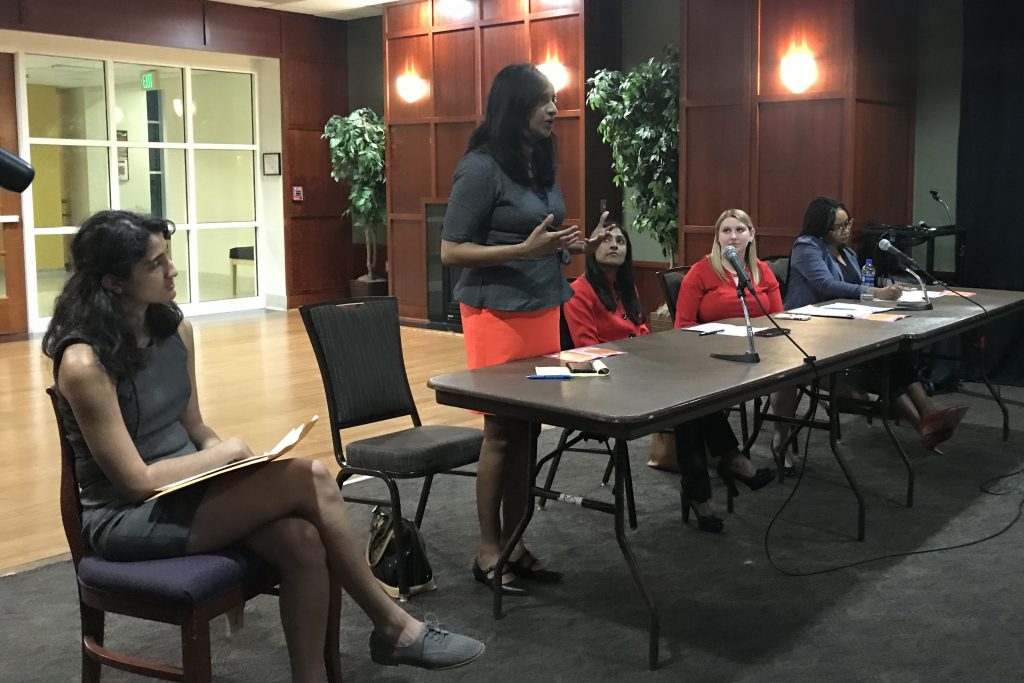 Women leaders from across the political spectrum spoke at a panel hosted by Ignite at Maryland (Jason Fontelieu/For The Diamondback).

When Krish Vignarajah attended a fitness cycle class with former First Lady Michelle Obama, the class instructor gave her a piece of advice that strongly resonated with her: “You’ve got this. You’re enough.”

Vignarajah relayed this advice to a crowd of University of Maryland students Thursday as part of a Women in Politics panel hosted by Ignite at Maryland, a group focused on encouraging women to run for political office.

The panel was composed of four women, including former politicians and people who work within political organizations.

Much of the discussion centered around the barriers that women face when trying to enter the political sphere.

“We want to inspire this generation, our generation of women, to step into the public realm and realize, you don’t have to be 100 percent qualified to try. You should step out of your comfort zone,” said Emily Kaplan, vice president of the university’s Ignite chapter.

Miller addressed “systemic barriers” that exist for women before they could ever even consider running for office, and noted the importance in trying to find “common ground” with people unlike you.

She shared an anecdote about a man who angrily called her office about a campaign sign that was placed in his yard. Miller responded by going to his home to talk to him and his family personally — and from then on, the man placed signs in his yard that said “Republicans for Miller.”

Other disparities mentioned included the trivialization of identity politics, the gender parity within non-elected political roles and bias in coverage of female presidential candidates when compared to their male counterparts. Panelists also discussed the 2018 “pink wave,” where 127 women — a record number — were elected to Congress.

Vignarajah pointed out, however, that “no one should be satisfied where we are.”

“We have never had a president or speaker in the Maryland legislature be a woman, nor have we ever had a female governor,” she said. “And so clearly in the great state of Harriet Tubman and Barbara Mikulski, we still have some work to do.”

“Change starts from the bottom, and the more educational events that you have, you never know what spark you might ignite,” she said.