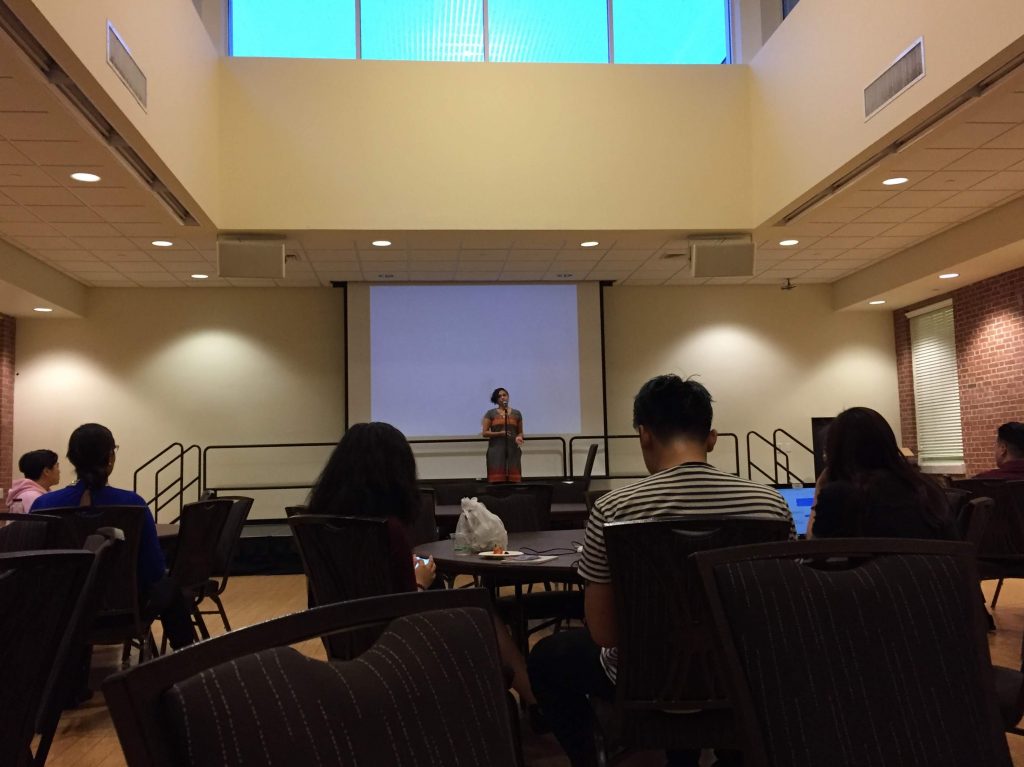 The Queer and Asian American and Pacific Islander Monologues (Ayana Archie / The Diamondback.)

Wednesday night was Nasia Nguyen’s first time doing stand-up. She looked back-and-forth from her phone to the audience as she joked about her experiences being a lesbian — living with her girlfriend, stereotypes and joining the rugby team. Another performer, who went by Z.I.N.A.R.A., read an original poem about sometimes having to decide between her identities as queer or Filipinx.

Nguyen performed as part of the annual Queer and Asian American and Pacific Islander Monologue in Stamp Student Union. The University of Maryland Pride Alliance and Office of Multicultural Involvement and Community Advocacy hosted the event, emphasizing giving a safe space and creative outlet to those with intersecting identities.

“This event in particular is really great and powerful, I think, because we’re collaborating in our kind of specific involvement areas and our identity areas, and really emphasizing the work we strive to do in the office — in MICA — to do intersectional work” said Dorothy Kou, the organization’s Asian American and Pacific Islander student involvement coordinator.

Nguyen and Z.I.N.A.R.A. were two of the four scheduled student performers. Caz Nguyen sang a rendition of Lady Gaga’s “Million Reasons,” and A-ron Justin spoke about how his identities influenced his matriculation through the education system. The event also included an open mic session, when, after some coaxing, a handful of audience members recited poetry.

Gowri Koneswaran, the poetry coordinator at D.C. nonprofit BloomBars and of Sri Lankan heritage, was the last to perform. Before she began, she held a moment of silence for the country’s victims of the series of bombings that killed more than 200 people Easter Sunday.

“It’s been a rough week,” she said after she resumed.

Koneswaran recited an assortment of her poems, including “Thank You,” an expression of some of the exasperation she felt receiving condolences after this week’s tragedy, and “How To Enjoy Your Vacation To A Country That Says It Won The War,” a criticism of global attitudes toward the country as merely a vacation paradise.

“While planning your journey, accept that ethics are not included in the price of your ticket,” she said. “Tell yourself your currency is helping the country. Do not question government control of the tourist industry. When researching your destination, skip the section about families in camps.”

Koneswaran said the opportunity to share her poems was cathartic in the midst of so much tragedy.

“The themes center around power and pride and healing,” said Hana Huie, a junior dance major and the event’s emcee.

Asian Pacific American Heritage Month and Pride Month are in May and June, respectively, but MICA and the Pride Alliance decided to celebrate the two in April so it could host a full month of events while school is in session.

“Something that’s really important, and this is just from my perspective, is walking away with something, I think, that works around identity and storytelling, required vulnerability … and help to build community,” Kou said.