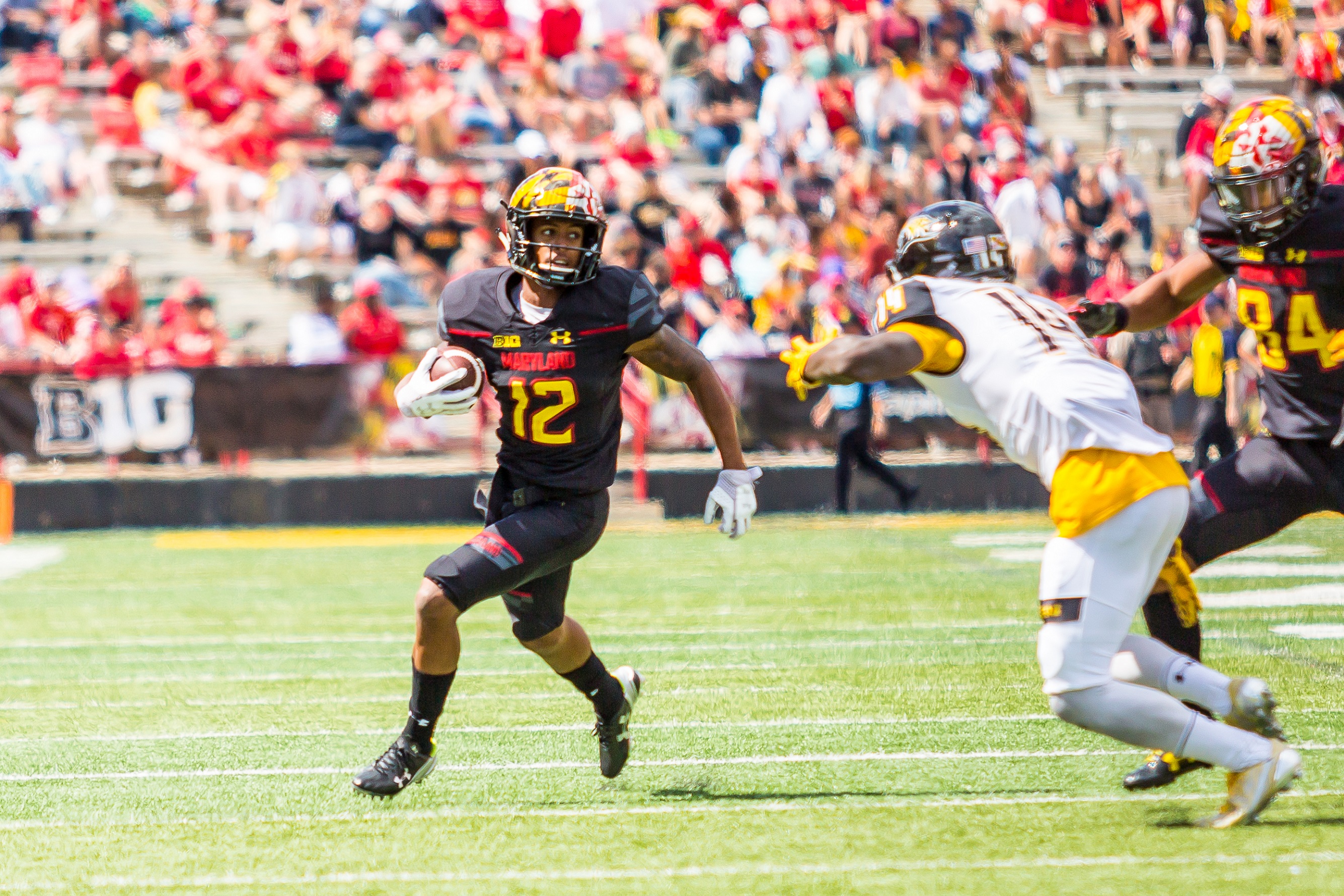 Wide receiver Taivon Jacobs sprints around a defender after making a catch during Maryland's 63-17 win over Towson at Maryland Stadium on Sept. 9, 2017. (Marquise McKine/The Diamondback)

Former Maryland football wide receiver Taivon Jacobs received a rookie minicamp invite from the Baltimore Ravens, he confirmed to The Diamondback on Monday.

After two ACL tears limited him to 13 games for the Terps in his first four years in College Park — he redshirted in 2013, suffered a season-ending injury in 2014 and was sidelined in 2016, too — Jacobs still posted impressive numbers.

He finished with 91 receptions for 1,115 yards, breaking into the top-25 in Maryland history in both categories.

Jacobs got his first full season playing in 2015, appearing in 12 games and finishing third on the team with 21 catches for 264 yards. His first career touchdown reception — one of two he reeled in that year — came on a 70-yard bomb from quarterback Caleb Rowe. Jacobs, who was a member of the United States Junior Olympic Track and Field Team, burned both defenders tailing him for the score.

He didn’t see the field in 2016 but returned in 2017, starting 12 games, pulling in 47 catches for 553 yards and five touchdowns. He broke out with big games against Michigan and Rutgers, hauling in eight catches for 92 yards and a score in the loss to the Wolverines a week after grabbing seven passes for 97 yards.

The Camp Springs native was granted a sixth year of eligibility in 2018, and he led a young receiving room with 25 receptions, good for 328 yards and two touchdowns. He was handcuffed at times because of a reliance on the running game and quarterback uncertainty, but Jacobs started the season in a big way.

With interim head coach Matt Canada’s jet-sweep heavy offense, Jacobs took six handoffs for 23 yards in the Terps’ week 1 win over Texas. He also came down with 73 yards through the air on five catches, including a trick-play pass from wide receiver Jeshaun Jones for a touchdown.

He recorded multi-catch games in six of the final 11 contests, including five receptions in a win over Minnesota.

After a six-year Maryland career, Jacobs will get a chance at the Ravens’ rookie minicamp this week.