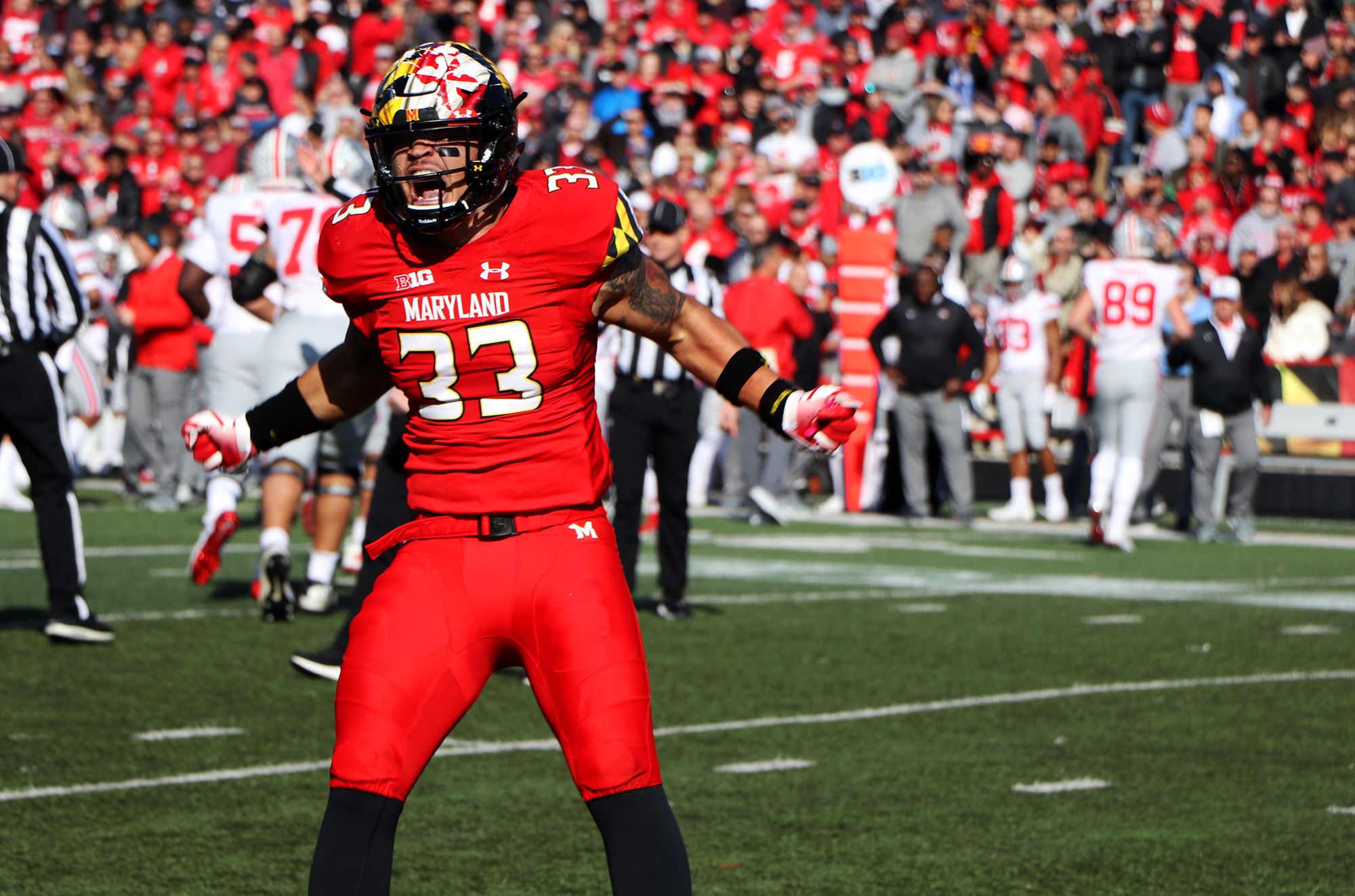 Linebacker Tre Watson celebrates after making a play on defense during Maryland’s 52-51 loss to No. 9 Ohio State at Maryland Stadium on Nov. 17, 2018. (Julia Nikhinson/The Diamondback)

Linebacker Tre Watson didn’t hear his name called in the NFL Draft, but the former Maryland football player is signing as an undrafted free agent with the Miami Dolphins, he confirmed to The Diamondback. He originally tweeted he’d be signing with the Redskins before deleting the tweet.

“Unfortunately it’s been a whirlwind for me. It is the dolphins tho,” Watson wrote in a message. “It’s too much to explain honestly.”

“This entire day is fuel,” Watson wrote. “I’m more motivated than ever and people won’t be able to keep doubting me.”

Watson posted eye-popping numbers during his lone season with the Terps after joining as a graduate transfer from Illinois. He led the Big Ten with five total interceptions and 9.6 tackles per game to earn first team All-Big Ten media honors.

But the Tampa native never received an invite to the NFL Combine in March.

“I certainly was surprised,” Watson said March 27 after Maryland’s Pro Day. “Everything adds to the fire.”

“Everything” could encompass a lot of things, but likely started with 247Sports’ three-star rating out of Tampa Catholic in 2014, leading to just one offer from a Power Five school. At Illinois, coach Tim Beckman was fired a week before Watson’s redshirt freshman season began, beginning a rotating door of head coaches during his college career.

He racked up 102 tackles as a redshirt sophomore, but a knee injury and a slide down the depth chart prompted his decision to seek out a better fit in his last year of eligibility.

Watson rode out the storm, though. He proved to be a difference maker on defense from the outset of the season.

“Coming into the year, expectations for me from the outside were low,” Watson said. “But my expectations remained as high as ever.”

He totaled nine tackles in the Terps’ season-opening upset over then-No. 23 Texas, including an interception late in the fourth quarter. He tallied 15 tackles against Temple in week three and added a sack against Minnesota in the next game.

In October, Watson posted a game-high 15 tackles and intercepted another pass against Iowa. Following a standout campaign, Watson was named a FWAA Second Team All-American.

“Becoming an All-American, becoming first-team All-Conference,” Watson said, “those are the things you sit in bed as a little kid and, you know, you try to do those things on video games, and I’m doing those things in real life.”

Watson said he ran in the low 4.7s on his 40-yard dash at his Pro Day, and he heard his shuttle was a 4.14, a drill he said is a better indicator of what linebackers can do.

Watson also had a knack for targeting penalties, picking up three in 2018. He said he wasn’t asked about those calls on visits with NFL teams, though.

“I haven’t really had it happen. If anything, I’ll probably bring it up myself,” Watson said. “Rules tend to suit offense more than protect defense.”

After five seasons of a roundabout college career, however, Watson is getting a chance at the next level. He’ll join the Dolphins, and hopes to bring the same intensity that helped him become a leader at Maryland.

“I’m a complete football player,” Watson said. “Even though I’m not the freak athlete that a lot of guys want to look at these days, I’m someone who can play the game of football really well.”