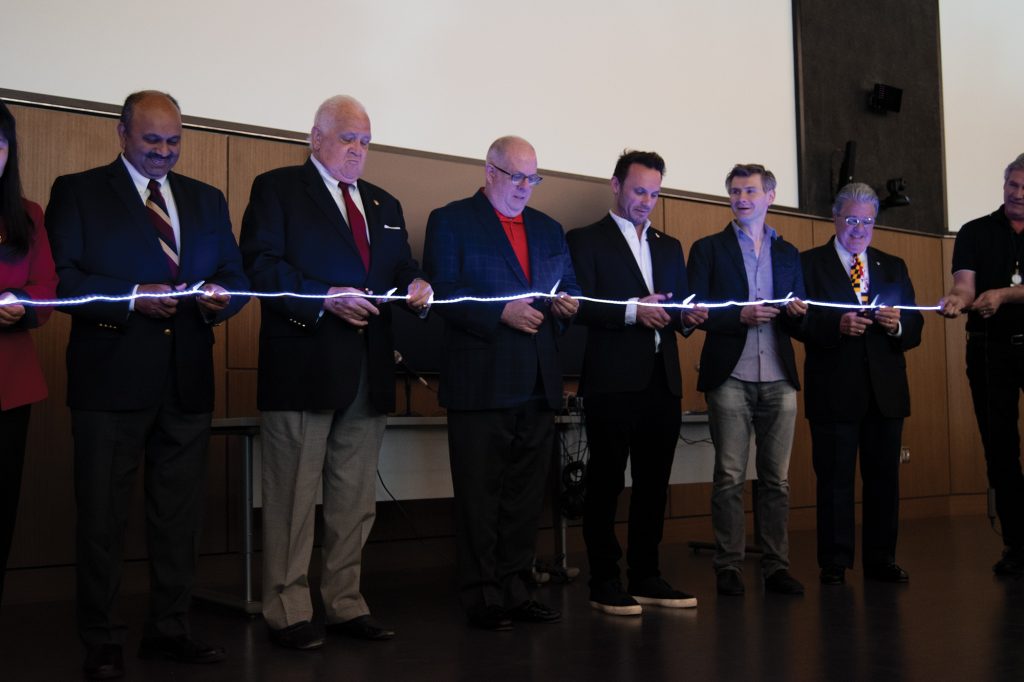 Brendan Iribe was touring the University of Maryland’s campus in 2014 when an idea struck him.

As the former student of this university and co-founder of virtual reality company Oculus was riding in a golf cart with his business partner Michael Antonov, they noticed a number of new, state-of-the-art buildings servicing engineering and physics students. The computer science students, meanwhile, were languishing in the cramped A.V. Williams Building and Computer Science Instructional Building.

“It just hit me, on that golf cart,” Iribe told The Diamondback, “that this was our calling.”

When he pitched the idea of building a new center for the department, then-computer science chair Samir Khuller — who was driving the pair — slammed on the brakes, stopped the cart, jumped off and asked Iribe if he was serious.

He was. Five years and more than $150 million later, Iribe’s namesake structure formally opened Saturday, with a ceremony heavily focused on how providing students with new resources will help spark future technological advancements.

“Today, we launch a new, energizing era in our history,” said Amitabh Varshney, dean of the computer, mathematical, and natural sciences college. “Our students will go on to be models, innovators and tech leaders, and they will transform life as we know it.”

The 215,000-square-foot, six-story building was under construction for three years and cost $152 million — funded by Iribe, the university and the state.

In addition to classrooms, offices and workspaces, the Iribe Center houses labs and research centers for cybersecurity, quantum computing, data science, virtual and augmented reality and artificial intelligence. The building also has a makerspace, outdoor seating, a cafe and a 298-seat auditorium.

“People of different backgrounds, across computer science, engineering, the arts and business will come together, innovate together and make transformation possible,” said university President Wallace Loh. “It will create a climate and culture of innovation, and that building will shape the future.”

In addition to Loh, Iribe and Antonov, the festivities featured a speech from Gov. Larry Hogan, who commended university and state officials along with donors for their work in ensuring the university’s commitment to computer science.

“This center will be celebrated as a point of pride for our state’s flagship university, and will ensure that Maryland continues to be a national and global leader for cutting-edge technology and innovation,” Hogan said.

He also presented Iribe with an official citation — a formal recognition of a specific achievement — for spearheading the project and donating millions of dollars toward computer science scholarship funds.

The ceremony was held in honor of Andrew Reisse, a graduate of this university who helped co-found Oculus with Iribe and Antonov. Riesse died in a 2013 hit-and-run incident, but Iribe and Antonov decided to continue his legacy and put together a scholarship in his name.

The new building features a rooftop park and photo gallery in Reisse’s honor.

“I’m feeling very inspired about the building,” Iribe said. “It came out absolutely beautiful. I think the vision that we had for a high-tech building — that would feel like it was also part of the style and the feel of the rest of the campus — all came together.”

Though construction remained largely on schedule, Francois Odil Dishmey Kelly, a worker on the project, died in August 2017 after falling down an elevator shaft, prompting investigations from the university and the state.

Williams Steel Erection Company, a contractor on the project, was later cited by  Maryland Occupational Safety and Health for allowing the worker to fall more than six feet. The violation was not classified as serious and did not carry a penalty.

The university used a “tiered approach” to opening the center, university spokesperson Katie Lawson told The Diamondback in January. Four classrooms and three study areas in the building opened for the start of the spring semester, and some computer science classes were held there. The rest of the building — which is now open —  was undergoing furnishing and final inspections.

Some computer science students voiced concerns in March over unclear plans regarding which spaces in the building were for undergraduate students as opposed to graduates. They said there had not been a steady source of communication between the department and the students, and they lacked input on how the space would be delegated.

No real progress came out of that town hall, but Saturday’s ceremony cast the building as a culmination of Iribe’s vision and a positive step for the future of computer science on the campus.

“The Iribe Center will be the bridge between traditional [academia] and the technological future of economic development of the state of Maryland,” Loh said.