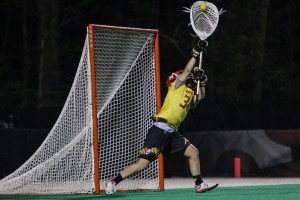 Goalkeeper Megan Taylor makes the save during Maryland women’s lacrosse’s 17-6 win over Virginia at the Field Hockey and Lacrosse Complex on April 20, 2016. (Matt Regan/The Diamondback)

Four Maryland women’s lacrosse players have been nominated for the Tewaaraton award, tied with Boston College for most in the country.

Braig spearheads a dominant Maryland defense, and she’s been nominated as a finalist for the second consecutive year. The Terps are currently allowing a meager 6.94 goals per game, good for second in the nation. Braig is a big part of that ranking, often guarding the opposing team’s best player.

Giles is Maryland’s go-to player on offense. She leads the Terps with 47 goals, 19 assists, and 66 points on the season. She’s also pulled in 26 ground balls, snagged 23 draw controls, and caused nine turnovers. The senior has scored in every game this season, and tallied at least five points in half of Maryland’s contests. This is her first nomination.

Hartshorn dominates in the draw circle for Maryland, and earns her first Tewaaraton nomination. Her 103 draw controls contribute to Maryland’s Big Ten-leading .599 percentage. She has also made strides offensively, scoring 34 goals while assisting 14. Her game-winning goal against Syracuse was crucial in maintaining a perfect season for the Terps.

[Read more: Meghan Siverson has been the unsung hero for Maryland women’s lacrosse]

Maryland has won seven of the last nine Tewaaraton awards, including a streak of four in a row from 2014 to 2017. The five finalists will be announced May 9 and invited to a ceremony held May 30 to announce the winner.

Three of those Terps were also drafted into the Women’s Professional Lacrosse League Thursday night, as Maryland had five totals selections.

Giles, Braig and Taylor, along with midfielder Erica Evans and attacker Caroline Steele were all drafted into the five-team league.

Evans and Giles went back-to-back at fifth and sixth by the Upstate Pride. Braig’s name was called at No. 18 by the New England Command. Taylor was drafted 21st by the New York Fight. Steele joined Evans and Giles on the Pride after being selected 25th overall.

Evans and Giles were the third and fourth midfielders off the board while Taylor was the only goalie to be drafted. Braig was the second defender taken.

The first three players drafted play for No. 1 Boston College, No. 2 Maryland’s presumptive main rivals in the national championship hunt.

With the four selections, Maryland has a nation-best 20 players in the WPLL. Northwestern and North Carolina follow with 12 former players on WPLL rosters.